Home / Blog / Do I need a tetanus shot for a dog bite? 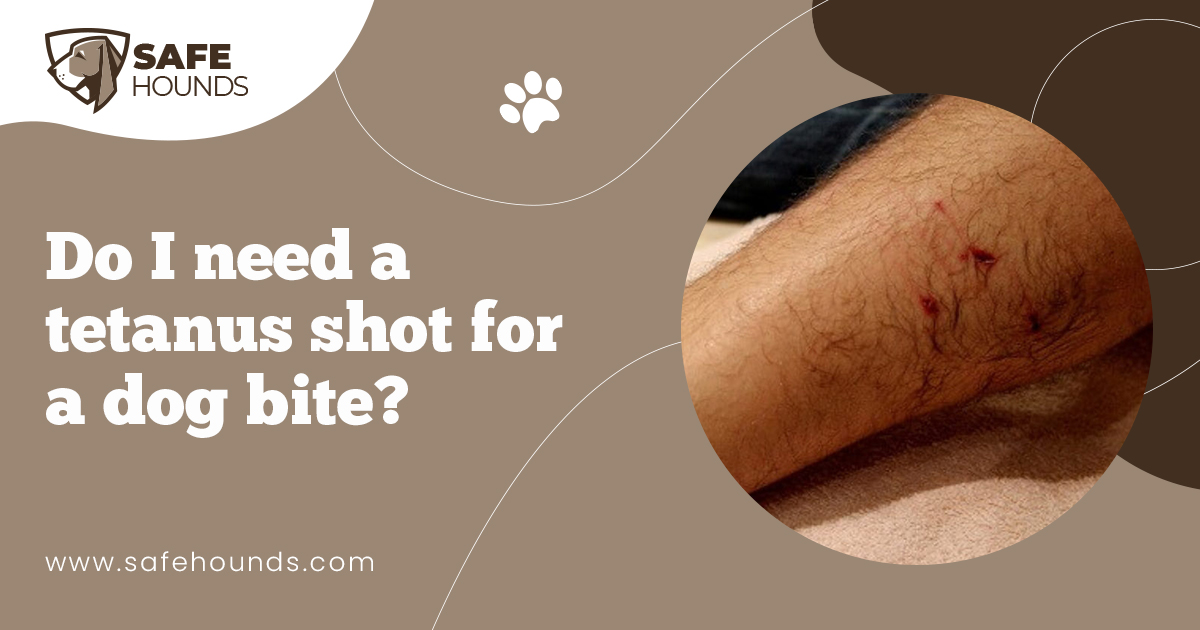 In short, YES. If the bite has punctured your skin and you have not had a tetanus shot within the last 5 years, then you should call your doctor to arrange for a shot to prevent tetanus.

How soon after a puncturing bite do I need to get treated?

If have not previously been vaccinated or if your existing vaccination out of date, then you should make sure you see a doctor and receive a shot within 24 hours of the dog bite incident. This ensures that symptoms of tetanus will not have a chance to develop.

Normally these symptoms will show up after about 7 – 10 days. However, research says ,the incubation period can vary between 24 hours and several months.

What will happen if I dont do not get a tetanus shot, you might ask. Well, if you are infected, then you might experience symptoms like:

These symptoms will worsen, if not treated.

My dog is just a puppy. Do I still need to get vaccinated after a bite?

Did the bite puncture your skin, if so. Yes.

What if it is only a small bite or a scratch? If it the skin is broken or punctured, then complications can arise, even if it is just minor, seemingly insignificant damage.

What if the bite was on my hand. Do I still have to worry? Yes, the same as above applies no matter what body part – being your hand, foot, leg, face or other.

It is not only you, it is just as important for your children. Especially if they have not yet been vaccinated against tetanus.

If you are unsure, call your doctor and make arrangements.

Why do you need a tetanus shot after a dog bite?

Tetanus can cause serious complications.

As mentioned earlier, symptoms of tetanus include lockjaw – jaw stiffness. As a result, you may experience difficulties opening your mouth.

Painful and uncontrollable muscle spasms, can make it hard to swallow and breath. The spasms can be so powerful that your bones break.

Fever is also common, reading a temperature of 38 celsius (100.4 fahrenheit) or higher.

Finally there are concerns such as excessive sweating and rapid heartbeat.

Tetanus is serious. It can be fatal, even with expert intervention.

In unlucky cases the muscle spasms caused by this bacteria can lead to death. This can happen when the muscles that are used to breathe spasm in such a way that the brain and other vital organs of the body are deprived of oxygen. Respiratory failure is actually the most common cause of death, according to the Mayo Clinic.

Most people recover without long term problems. It is a, however, a tedious process that may take anywhere from several weeks to months.

Treatment is often handled at the ICU at a hospital. Here you will receive a host of different treatments such as antibiotics, medication to relieve muscle stiffness and spasms and tetanus immunoglobulin.

Getting the tetanus shot

As an adult, tetanus shots are normally administered by your doctor.

As recommended by the CDC in the United States, the doctor will visually inspect it for discoloration and particulate matter. He or she will then shake the vial or syringe well and, once again, check again everything is as it should be before injection.

Some people ask if they can drink (alcohol or otherwise) after getting a tetanus shot. The answer to this question is YES, drinking has no effect on the success of a tetanus shot.

How often should you get a tetanus shot or a booster?

In the United States there are 4 different vaccines used to preventing tetanus.

DTaP and DT vaccines are used for babies and children under the age of 7.

Everyone else will normally receive the Tdap and Td vaccines.

The CDC recommends that everyone receives this vaccine.

These injections do not only cover tetanus, but also other illnesses such as diphtheria, hepatitis B and polio.

The vaccines are not lifelong. Thus if you get bit, there is a chance the doctor will recommend you get a booster.

There are 3 typical scenarios:

Clostridium tetani is the bacterium that causes tetanus. In the form of a spore, this hardy organism can live in the soil for years. When it enters a deep wound, it will change into a bacteria. This bacteria produces tetanospasmin, which weakens and damages the nerves controlling your muscles.

If treated successfully, tetanus can last anywhere from a few weeks to several months.

Unfortunately, even with professional help, treatment for tetanus do sometimes fail.

About 1-2% of the US population gets bitten by dogs every year. Out of the over 4 million dog bite incidents, 750,000 are serious enough to need medical attention.

Theres a notion that:

This, unfortunately, is not correct. Statistics show that dog bite incidents are commonly caused by the victims own dog.

What should I do after a dog bite?

Knowing the statistics, we can understand why it is important to know how to treat a dog bite, when you live around them.

WebMD recommends the following approach to a dog bite.

While you are still at home, check if it has punctured or scratched the skin in any way.

If so, use a clean cloth to stop the bleeding. Keeping the injuries area elevated will help.

Now carefully wash the wound with soap and water.

Apply a sterile bandage and apply an antibiotic ointment to prevent infection.

After the initial home treatment, you should contact your doctor.

The doctor will inspect the bite wound, checking for damage to bones, muscles, nerves, tendons etc.

He will also clean it thoroughly. Removing any dirt and bacteria.

Finally, if needed, he will administer antibiotics, tetanus and rabies vaccines.

Are there other vaccines that I should get after a dog bite?

If needed, your doctor will typically recommend antibiotics to prevent infections in the wound.

Second, if you have not had a tetanus shot for long time, he may recommend a booster shot.

In rare cases, a vaccine for rabies, might also be recommended.

Is tetanus and rabies the same?

Rabies is a viral disease. It affects the central nervous system.

A tetanus shot does not prevent rabies.

Rabies and tetanus have, different causes and consequences and require differing courses of treatments.

Can dogs get tetanus?

It is true, dogs can become infected by tetanus. It is, however, very rare.

When it happens, it is usually because it stepped on sharp object or was bit by another dog.

Tetanus is very similar in dogs and humans. The following symptoms may help you spot if your dog has tetanus.

Unfortunately, the only way to know for certain if your dog is infected, is to take it to a veterinarian to get tested. A laboratory test is necessary to determine the presence the neuro toxin, tetanospasmin.

Treatment, much like with humans, happens at the animal clinic or hospital. Here it will stay until it is stable.

During the stay it may be given anti-toxins, antibiotics, muscle relaxants, seizure prevention medication and sedatives.

How should I clean a wound?

How to train a dog not to bite?

First Aid if your dog has been bitten