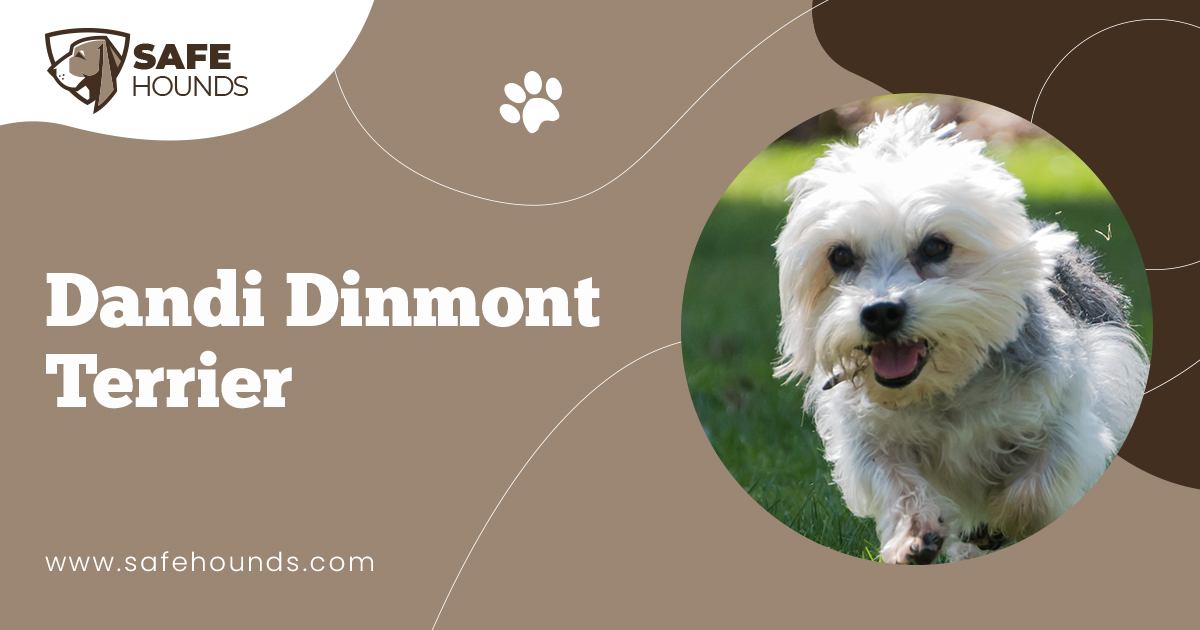 Dandi Dinmont is a very old breed whose lineage probably descends from the extinct Scotch Terrier from the border regions of England and Scotland. The Dandi Dinmont Terrier is probably the only dog breed in the world to be named after a fictitious character in the novel Guy Mannering by Sir Walter Scott in the 1800s. They were used as hunting dogs for rabbits, badgers, and otters in the early days. They were raised mainly by the wandering gypsies and were used by the farmers to kill vermin in the fields.

The characteristic feature of the Dandi Dinmont Terrier is its distinctive silky topknot, which gives it the gentle, wise look. These dogs are sturdy built with strong bones and good muscular strength. They come in two colors of Mustard (reddish brown to a pale fawn) and Pepper (dark bluish black to a light silvery gray). It has a unique mixed coat of soft and harsh hair together. The hair on the top of its head is silky, while on the body the hair is stiff and crisp. It does not shed much hair and its size makes it a much sought after companion dog.

Generally, these dogs are affectionate and love to play. They are very lively and plucky dogs with an instinctive protective attitude towards their owners and the house. However, they are reserved with strangers and have a big bark as compared to their size.

They are good dogs and get along with children if raised from a pup in the same family. Keeping non-canine pets may not be a good idea as they hunt them being instinctive mouse hunters. With cats, they are fine, if raised with them. Dandi Dinmont Terriers are very dominating and two males can get aggressive if in the same household, so it is best to avoid such situations.

Dandi Dinmonts stand between 8 and 11 inches tall at the top of the shoulders and can weigh between 18 and 24 pounds. They are proportionately longer than they are tall. The legs are stocky, but muscular and the head is covered by a topknot of silky hair. The teeth are scissor like and large for the dogs size.

The ears are pointed at the end, but wide near the head with a pendant look. The eyes are hazel with an intelligent, wise look and are not protruding. The tail of the Dandi Dinmont Terrier are 8 to 10 inches long with an upward curve with thickness at the base and tapering at the end. The coat is long with 2 inch hair that has an intermixing of crisp and soft hair giving it the permed look. Hair on the top of the head and ears are the softest.

This breed of dogs come in only two colors with different shades – Pepper and Mustard. Pepper color ranges from dark bluish to light gray with silver. The topknot and the ear feathers are white and the lighter the better breed. While the hair on the legs and paws should be tan, but do vary according to the body color of tan to beige/ fawn. The Mustard color Dandi Dinmont does vary from reddish brown to very light fawn. Feathers and topknot are off white while the leg hair are darker than the topknot.

The feet of Dandi Dinmonts are round and cushioned. Dewclaws are removed from the forelegs early as pups. Hind feet are smaller than the front feet and do not have dewclaws. Nail colors vary according to the color of the dog, but generally, the nails are dark in color while being strong.

Appearances put aside, the little dog has a big bark and is quite wary of strangers otherwise the Dandi Dinmont is an affectionate dog who loves to have fun. A few words to describe Dandi dismount are lively, determined, willful, and independent with a wise and gentle look. Canine pets can be compatible with Dandi Dinmont while other pets like hamsters and mice are hunted by this breed of dogs.

They make good pets for apartment living as long as their need for exercise is met with a small yard. They are highly active animals and while going out should be put on a leash, as they tend to go after squirrels, cats, or other animals. The Dandi Dinmont is good with children they have grown up with and enjoy playing. Training is simple but it is not very obedient and shows a stubborn streak.

The Dandi Dinmont has intermingled soft and harsh hair that needs regular brushing and care but they do not shed much. Professional grooming is advised for a proper well-maintained healthy life. However, dead hair needs to be plucked at least once a year. Many of dogs this breed are trained as show dogs and need better grooming.

Nails are dark and hard which requires trimming on a regular basis. The top of the muzzle needs trimming and hair on the corners of the eyes should be trimmed short for sight. Hair needs to be removed from the ear canals routinely. Feet care is also important apart from trimmed nails, hair needs to be cut from between the pads. Like all dogs, the Dandi Dinmont needs good exercise and a nutritious diet.

The Dandi Dinmont Terriers originated in Scotland during the 18th century and share a common lineage with the Skye Terrier and the Scottish Terrier that is now extinct. In the early days, they were commonly bred by the gypsies and farmers as they hunted vermin well. They were good accompanying dogs on hunts as well as retrieving game like rabbits, otters, badgers etc. therefore they were popular dogs.

The rule of evolution is to adapt according to need. The Dandi Dinmont Terriers size and physical appearance evolved as a result of the need for a hardy hunting dog. He needed stamina for hunting over the English Scottish border that was rough with thick undergrowth and rocky patches.

As a hunting dog, it accompanied hunting parties, in search of rabbits, otters and vermin, that needed low height with strong jaws. The unusual name comes from being named after a fictitious character, Dandi Dinmont, a jovial farmer who bred dogs in the book Guy Mannering by Sir Walter Scott. Sir Walter Scott also named the colors of the breed pepper and mustard again adapted from the book.

It still remains one of the oldest pedigree breed clubs globally. Standardization of the breed was needed and was brought out by Mr. W.W. Reed, the founder of the Dandi Dinmont Terrier club. The breed came to be registered with the American Kennel club in 1888 and recognized in the UK in 1918. The Dandi Dinmont breed is on the endangered native breeds in UK currently. With proper breeding and the finding of good homes for these attractive animals one day, they may be taken off the endangered list.