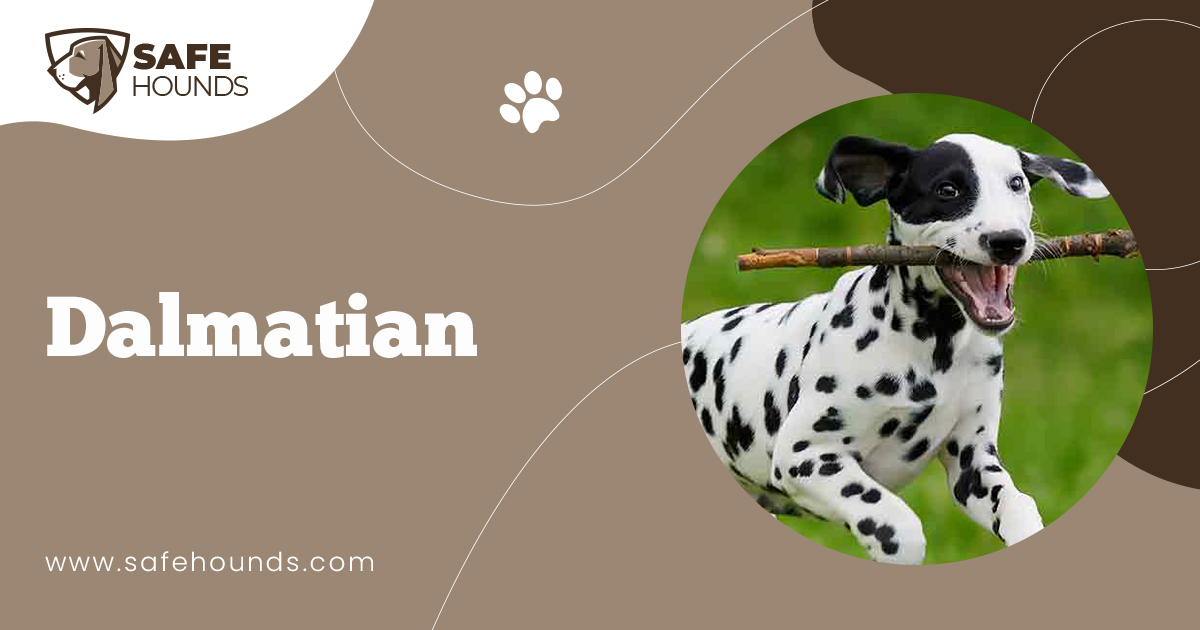 Dalmatians have been known for years as a firehouse dog. You may have seen them in movies or in real life as the dog at the firehouse that lives at the fire station and rides along with the firefighters. Dalmatians are also very well known for the Disney movie 101 Dalmatians. This was a popular movie that helped to make this breed very popular as well with kids and also many adults. Many people after seeing the movie purchased these cute and adorable dogs not realizing just how much exercise they really need to stay healthy. They soon learned these dogs were not for people that did not want to spend time with their dogs as an active participate.

Dalmatians are very well known for their white coat with black spots. This has been their trademark for several years. This breeds origin is not known for sure, but some documentation has stated the origin to be Yugoslavia, Egypt, Greece, or Rome.

The Dalmatian is known has the working dog. It has been said that this breed has been used for herding and hunting. In addition, the Dalmatian was also used for being a carriage dog as well. This was just simply using the dog to guard the carriage and such. Dalmatians are also dogs that love to go swimming, which is one of their favorite sports.

One thing people love about Dalmatians is that they are very loyal to their owners. If you tend to adopt a Dalmatian from a shelter, be careful because Dalmatians are good with remembering anything bad that has happened to them and it could effect later in life as well.

The Dalmatian is a very popular breed mainly because of their unique coat. Their fur coat is short, dense, hard coat that is spotted of black, brown (liver), lemon, dark blue, tricolor, brindled, solid white, or sable on a pure white coat.

The feet on a Dalmatian are round with very well arched toes. The nails on a Dalmatians foot are either all white or the color of their spots. The nose on the Dalmatian can be black, brown (liver), blue, or a dark grey that is almost black looking. Their eyes are beautiful eyes that show an intelligent expression. Their eyes can be any color from dark brown to blue and sometimes even an amber color. Their ears narrow toward a point and then they are carried with somewhat of an upward curve. Their ears are also very soft to the touch. The Dalmatians tale is long and has a slight upward curl to it when the dog is at full stand. Their tale can have spots on it as well, but is mainly all white from the top to the bottom of the tail.

Now with puppies, they are born all white and later on spots develop as the puppy grows. With Dalmatians, the more defined and brighter their markings the more value the dog may have.

The Dalmatian should stand from 19 to 24 high and should weigh anything from 45 to 70 pounds. Now with each different type of dog shows, the weight and height limits vary.

Dalmatians were bred to do things such as hunt, herd, and are very well known in history for running alongside carriages. Therefore, this is one dog that loves their exercise and does like sitting around doing nothing. This breed is a very loveable, playful, loyal, sensitive, and very happy dogs. Without getting the attention and the love from their owners, this breed of dog can become depressed and not very active. So, make sure to give this breed the love they need. Because this breed needs so much attention, they do not make good yard dogs.

The Dalmatian is a very playful and hyperactive type of dog, they are good with kids, but not for toddlers. This is a great dog for teenagers to have around for love and companionship. The Dalmatian is a very trainable dog. They can be trained for defense and also for being a good watchdog. Due to their history, they are known for being good watchdogs. Dalmatians can have up to 15 puppies per little and if not raised right they can become aggressive.

Dalmatians are very bad shedders twice a year. So good brushing of this dog is a good idea. Dalmatians do not carry a dog odor and are very good at staying clean. This breed is much known to not even step into a puddle like most dogs will. So, a bath is only needed when they do get dirty.

A nail trimming is a very good idea with this breed. Their nails tend to grow very quickly, so a trim at least every few weeks will do this breed good. In addition, good exercise is something else that this breed of dog needs. Make sure to have a big yard for them to run and play in. Apartment life really does not fit this dog unless you take him outside all the time to play and give him time to run around.

In the 1800s, the Dalmatian breed became a carriage dog. This meant for the dog to run along the carriage and sometimes even among the horses. The Dalmatian also was a guard dog for the carriage while their masters did their own thing. The Dalmatian not only follows his master on the carriage, but also while his master rode their horses and traveled as well on foot. The Dalmatian has been known for many other uses such as a mascot for firefighters around the United States, War Sentinel, Circus performer, hound, vermin hunter, guard dog, and shepherd. Today, they are very well known as a good companion for humans.

This dog also became very popular with the hit Disney movie and the book called 101 Dalmatians. After the book and the movie were released, many people found a love for the Dalmatians. Today in the AKC and other dog shows, this breed is shown as the working dog class. This is because of their history of being great working dogs for many uses. Today, people still use the Dalmatian breed for working and guarding, but they are mainly used for just being their masters best friend.