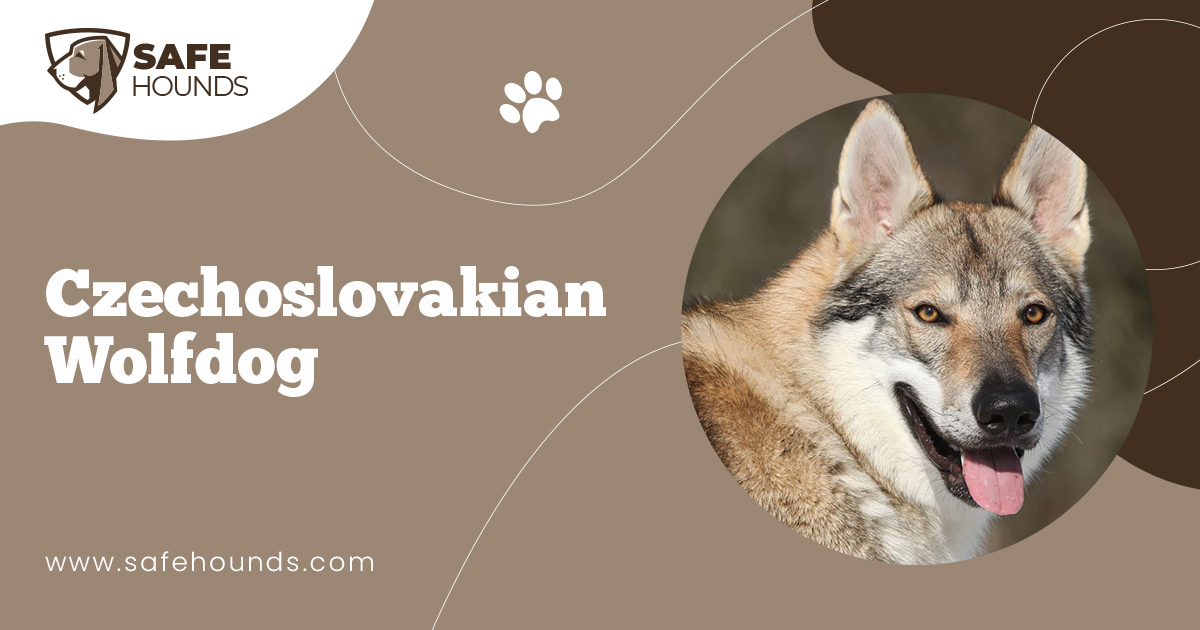 A dog whose appearance is very similar to that of a wolf with its thick straight silver gray or yellow gray hair, its light but powerful body and the eyes that would obliquely size up a stranger the dog is a Czechoslovakian Wolfdog. Also known as the Czech Wolfdog, Czechoslovakian Wolfdog, Ceskoslovensky Vlack, Slovack Wolfdog, Chien-Loup Tchecoslovaque, this dog does not boast any historical and illustrious masters. The dog can not lay claim on any ancient ancestors as this is a fairly new breed, a result of the experimental breeding conducted on a German Shepherd Dog and a Carpathian Timber wolf. The dog that was developed is a strong wolf like dog that has a great sense of direction and possess the stamina to easily traverse rough terrain at the speed of 12 kilometers per hour. A CzV has a wolf-like ability to react speedily. These dogs are canters and running a 100 kilometer distance would be an easy task.

People who are not so familiar with this breed would be awed by the wolf-like appearance. Does the dog have the wolfs inherent ferociousness? An elegantly cantering CsV is a truly magnificent sight to behold but what about the dogs temperament and the character? Would it be a suitable family pet? A CzV may be a handsome looking dog but would it be easy to train? A prospective Czechoslovakian Wolfdog owner would naturally have these questions.

A CzV has both the desirable characters of its ancestors. Being a part wolf, it can function well in a pack in the same manner that it would do well as an individual dog. Wolves have pack hierarchies. A pet CzV would expect to have one too. This natural caste system is important as it will determine where the dog fits in. In the wilds wolves or any other pack of wild dogs for that matter would have a dominant male whom other dogs on the lower levels would look up to. The leader would be the strongest, the biggest and the most intelligent dog in the pack. This dog will be considered as the alpha or the first male. In a household, the master would fill the alpha slot. Family members would be the other pack members and the dog should be the last on this list. The CzV should understand where it fits in. Moreover, the dog should be content with the arrangement. This pack thing is very important and not just power play. The CzV needs to look up to an alpha male otherwise the owner would find it very hard to train the dog.

A Czechoslovakian Wolfdog is a dominant smart dog. This is why this dog is not for person who does not have the time (and the money) to have this dog socialized. `The master should be able to curve the human aggressiveness inherent to the dog. The most suitable time to do this is while the dog is still young. Through socialization and obedience training the dogs undesirable behavior will be nipped in the bud.

If you see a Czechoslovakian Wolfdog you would instantly see the very visible features of a wolf. The stance, the build, the elegance as well as the ferocious look are all reminiscent of its wolf ancestor. Similar to a wolf, a CzV has a rectangular body and muscled withers. The back of the dog is straight and firm, pear shaped chest is rather flat and does not reach the level of the elbows.

The expression of the slightly arched head must indicate the sex of the dog. Slanting rather small amber colored eyes have tight fitting lids and give the appearance of constant watchfulness. Black rimmed lips enclose 42 well developed teeth that meet in a scissors bite. Cheeks are well muscled though harmoniously proportionate to the head and do not protrude when dogs head is viewed from the front. Ears are one of the distinguishing features of a wolf. The ears of a CzV are pricked, thin and triangular in shape. Dogs tail is set on high and basically hangs down. When the dog is excited, the tail is raised and forms a curve.

A CzVs coat is very thick, colored silver gray or yellowish gray with a lighter or a darker mask mask. The fore chest and the underside of the neck would also have lighter colored hair. The dog grows a very thick undercoat in winter. The top coat also thickly covers the entire body as well as the inner ears of the dog.

Lively, playful, with a high level of endurance, docile but can be very ferocious and would speedily react at the slightest sign of threat these are the outstanding qualities of a Czechoslovakian Wolfdog. A CzV would be an ideal family pet, one that would enjoy playing with the children. These dogs would form a strong attachment with the human family and would be gentle with the children. These dogs are known to be loyal to the master they consider to be the leader of the pack. Barking though is pretty unnatural for this breed and communicating with the master and with other members of the family is done through other ways. These dogs make good guard dogs as even though they would seem to be quiet and unassuming, their eyes would follow the movements of other people in the area, they are constantly alert and would not hesitate to speedily react if it deems action is necessary.

Rather than specialized, this breed is known for its versatility and for its all around qualities. Honing and developing an ability however can be a challenge as this dog can be temperamental. This dog would abhor senseless repetitive exercises. This is why some obedience trainings would fail. Aside from providing a motivation, the dog should be made to understand why they should follow and do the required exercises. As mentioned, training these dogs can be a daunting undertaking however, training is necessary. Dogs are by nature hierarchical, more so with CzVs. These dogs would definitely need to have a leader to follow. A dog allowed to do anything it pleases would be one confused, anxious and insecure dog.

A CzV would do fine in an apartment as this dog is moderately active indoors. Sufficient exercise however should be ensured. The most suitable living condition is in a rural area with a fenced backyard where the dog will be given ample space to roam. The dog have to be kept on a leash if walked in a public area as although a CzV would tolerate other family pets, the dog can be aggressive to other animals and even to humans.

The dogs hair is constantly changing. The dog would grow longer and thicker hair during the colder months and would have shorter and thinner summer coats. Grooming therefore would depend on the kind of coat. The winter coat should be brushed every so often to remove mats and tangles. The summer coat would need little maintenance other than brushing to remove dead hair. Bathing is not really necessary as the dogs easily shed dirt. CzV have no doggie smell but the dog can be shampooed occasionally.

The Czechoslovakian Wolfdog is the result of the experiment conducted in Czechoslovak Republic before it was split into Czech Republic and Slovakia. In 1955 the first attempt to breed the wolf Brita with a German Shepherd Dog was made in the Libejovice breeding station by Mr. Ing. Karel Hartl. Unfortunately the experiment was unsuccessful. Brita was again mated with another German Shepherd Dog named Cesar z Brezoveho haje and on May 28 1958 the first Czechoslovakian Wolf pups were born.

The aim of the experiment is to establish if the resulting offspring from mating a dog with a female wolf and a bitch with a male wolf can be reared successfully. A large percentage of the resulting offspring possess the desirable qualities necessary to continue the breeding processes. Anatomical as well as physiological characteristics of the hybrids were carefully examined. Training capabilities as well as the dogs stubbornness were thoroughly tested. In 1965, before the experiments were ended, a breeding plan was established. The plan is to combine the functional qualities of the wolf with the positive characteristics of the dog.

In 1970, most of the hybrids were able to escape the iron curtains when the dogs were sent to kennels in Malacky, an area on the Bratislava part of the border guards. The pressure to create special dogs for the army was eased. Therefore the Slovak breeders were able to devote more time in developing the external features of the new breed. Major Frantisek Rosik, the Vice commander of the kennels at that time is responsible for the development of the Czechoslovakian Wolfdog in Slovakia.