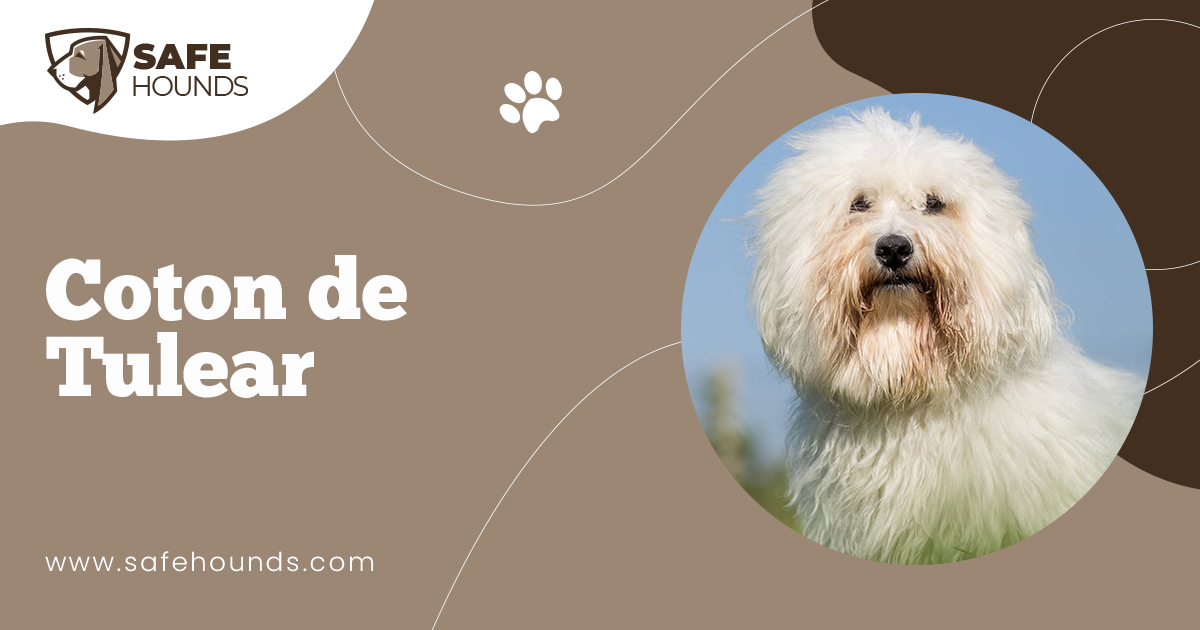 Coton de Tulear (pronounced as cottown duh Too lee are) is a small breed of dog that was developed in the early twentieth century in the island of Madagascar. The French word coton is for the dogs cottony soft hair and Tulear was taken from the name of a sea port city in Madagascar. These little white dogs that were once used by sailors to rid the ships of rats also become excellent companions of the ladies on the long and boring sea voyages. This is due to the fact that these dogs can be pretty amusing. Cotons love to love people and in return they would love to be loved too.

These highly intelligent dogs can be an unending source of joy and fascination as they have this endearing quality to please the master. Cotons are known to follow the master around. Other dogs do this too but a Coton has this habit of standing and walking on its hind feet to please the master. These are little showy dogs that would love to perform in front of other people. Once they know that they are being watch, these dogs would clown around, do its famous walk, jump and play endlessly to amuse the audience. These are intelligent dogs that would seem to talk with the owner. When spoken to, the dog would cock its head, pay attention to what is being said and would talk back by making unique grunting and grumbling noises that can not be considered as barks.

Although pretty small, this dog is known to have a big heart as it would never get tired of being affectionate. This dog would thrive more on affection rather than food. Cotons are always ready to accept the petting and the cuddling you can dish out. In return be ready to be showered with kisses as this dog will never tire of following you around and jumping on your lap and licking your face whenever given a chance.

Ancestors of the present day Cotons arrived in Madagascar during the early 15th century when a ship was wrecked by a violent storm. The only survivors were the dogs who managed to reach the shore and settled in the dense forest of Madagascar. The little dogs learned to survive, became wild to protect themselves from predators. These dogs are cunning and enterprising. There was a story about a pack of Cotons who wanted to cross a crocodile infested river. These cunning dogs managed to outwit the reptiles by choosing the narrowest part of the river. Some of the dogs ran to the widest part of the river and lured the reptiles by barking ferociously. When the reptiles reach the spot where the dogs are barking the Cotons sprinted to the narrow passage and cross the river.

Present day Coton de Tulear still have the primitive characteristics of their ancestors. Given the chance, these dogs will still hunt. Unlike other breeds where the leader is a male, a Coton pack has a strong dominant female leader. Because Coton de Tulear is a fairly young breed it is quite easy to see the distinguishing features between a female and a male dog. Males are bigger and more masculine while the females are truly enchanting little ladies.

Coton de Tulears are hardy little dogs that are expected to live 15 to 19 years. A female weigh approximately 8 to 11 pounds and males are about 9 to 13 pounds. A Coton male dog stands 10 to 12 inches tall and the female has an approximate height of 8½ to 10½ inches.

The non-oily cottony white coat is what makes this dog breed distinct from other breeds of similar type. The coat is also where the dog derived its name. The hair that is very soft not unlike a cotton ball grows densely about three inches long. The coat is mainly white with lemon, grey or light brown markings on the dogs ear and body. Coat can also be tri-colored. Coton puppies may be born with an all white coat or with yellow, rust, brown or black spots on the ears, on the head and at times on the dogs body. As the puppy grows older these markings would eventually fade into champagne or grey colored spots

Cotons nose can either be brown or black. Some specimens would have pink noses. Pink nose however is not accepted in the CTCA and FCI standards. The dark, round and widely spaced eyes give a merry, lively and intelligent expression. Eyelid rims are pigmented with the same color as the nose. The thin triangular ears are set high on the dogs head. Ears are pendulous and hang close to the cheeks. Teeth are well aligned and meet in a scissors or pincher bite.

Cotons have strong slightly arched neck and well developed chest that reached below the level of the elbows. Small arched feet have black pads. The tapering tail is usually carried over the back when the dog is excited or in motion.

Coton de Tulear is a very affectionate, sweet tempered and lively dog. This is why these dogs make very good companions. Aside from their cute appearance they are most favored because of their clownish antics. Cotons are people dogs. They have an inordinate tendency to please the human family. These dogs are dubbed as boisterous happy little clowns as aside from their endearing stuffed toy look, these dogs would clown around by walking on its hind legs every time the dog is aware that he is being watched. Cotons are companion dogs and they get very attached to the master enough to suffer separation anxiety.

Coton puppies are a bit shy and would be cautious of new surrounding and new people. However, this attitude can be corrected with early socialization. Cottons are intelligent dogs and they can be trained easily. However they would respond better to praises rather than to reprimands. An owner need to be firm with this dog as Cotons are known to have a mind of their own and they can be very obstinate.

Being people dogs, Cotons gets along well with children. These dogs would do well in apartments and condos as they are fairly active indoors and would not really require a yard to play on. However, romping with the kids in the park or jogging along with the master will provide additional exercise for the dog.

Cotons do not shed thus they would be a good choice for people with allergies. The long soft non-oily hair however would need to be carefully maintained to avoid matting. It is recommended that a pin brush will be used to groom the dog. This is to prevent damage to the coat. If daily brushing is not possible 3 to 4 times a week will do as long as the hair is brushed thoroughly to avoid matting.

Nails must be kept short but take care not to cut the quick as it would bleed profusely. Excess hair between the foot pads must be trimmed. Use a blunt tip scissors. Ears must be checked weekly. Excess hair inside the ears must also be removed. Teeth must be cleaned two to three times a week using a toothbrush and a dog tooth paste. Bathing should be done twice or three times a year or as deemed necessary by the owner.

The Island of Madagascar is the country of origin of the Coton de Tulear. The dog is also known as the Royal Dog of Madagascar and it was given the honor to be Madagascars national dog. Cotons were also featured in Madagascar stamps.

A Bichon and Maltese type of dogs were kept by Spanish and Portuguese sailors on their ship mainly to control mice and rat infestation. These adorable little dogs became the companions of the ladies during the long voyage at sea. These ships sailed to the West Indies, to Cape of Good Hope and to Mozambique Channel. It was said that around the 15th century one of these ships was wrecked by a violent storm. No sailors survived but the little dogs were able to swim ashore.

The shipwreck happened near Tulear, a sea port city in Madagascar. The sea port is presently named Toliara. The little white dogs settled in the forest and foraged for food to survive. The Malagasy were fascinated by the dogs appearance and when they learned about clownish antics they offered the dog to the King. Soon enough, the dogs became the favorite of the nobles. For about a hundred years only the royalty were allowed to own Cotons. The dog was given as gifts to visiting French dignitaries and from then on the dog gained popularity in France and in Europe.

A small breed of dog believed to have originated from Madagascar started to generate attention in Europe during the 1950s. At that time, Madagascar was a colony of France. The Societe Canine de Madagascar tried to get the breed recognized by FCI during the late 1960s but Coton de Tulear was accepted by FCI into their registry only in 1970. FCI is the oldest registry for the breed. Cotons first set foot in American soil in 1974 when Dr. Robert J. Russell coming back from Madagascar brought two Cotons to the United States. Dr. Jay and his father Lew established Oakshade, the kennel where the Contons were first bred in America. The Coton de Tulear is enjoying tremendous popularity in USA. The dog was favored for its appearance as well as for its outstanding trait of being an excellent companion.