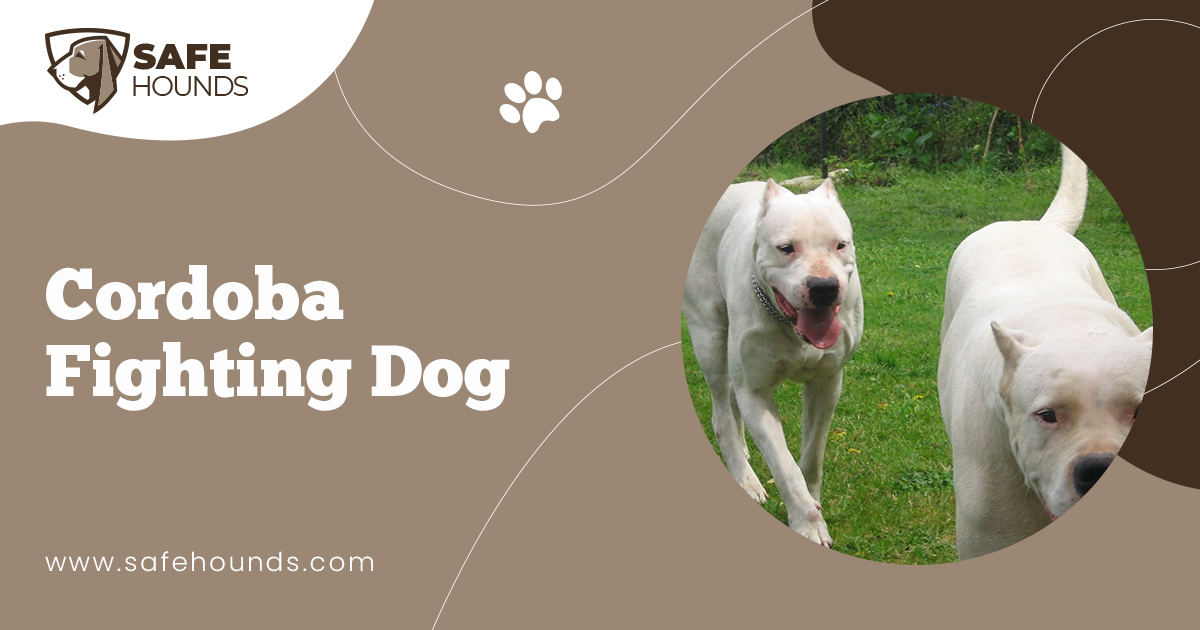 The Cordoba Fighting Dog is a highly skilled and dexterous breed of fighting dog. This breed was developed in Cordoba, the second largest city in Argentina, hence the name. After bear baiting was banned, dog men have turned their attention to dog fighting. Breeders have developed a dog breed in response to the demand for a breed that will be used in dog fighting. The Bull Terrier, the Spanish Mastiff and the Old English Bulldog became the foundation for the creation of a breed that is to become the Cordoba Fighting Dog. The fighting dog that was developed is a large breed, usually measuring 25 inches at the withers with a predominantly white coat although dogs with variedly colored coats are also seen.

The Cordoba Fighting Dog is first and foremost a fighting dog. The dog is noted for its vicious and very aggressive temperament. With its athletic and muscular body, with the very strong jaws, it is apparent that the dog is a mean fighter. The Cordoba Fighting Dog is occasionally hunted but the human hunter has to make sure that the dog is not hunted in packs because this breed is extremely dog aggressive. If hunted in packs the dogs would often abandon hunting in favor of fighting often causing other dogs to be seriously injured if not killed.

The strength and the extremely aggressive temperament is what made this breed highly prized by dog men. During the heydays of dog fighting, the Cordoba Fighting Dog is a highly acclaimed breed. Unfortunately, the aggressive temperament that is the most important asset of the dog is one of the reasons why these dogs became extinct. The Cordoba Fighting Dog only excels in dog fighting. The dog makes a poor hunter. This fearless dog can pit its strength against large game but the dog is noted for its inadequate scenting ability. Other working dogs evolve into wonderful family companions when the original purpose for their development is gone. However this is not true for a Cordova Fighting Dog. These dogs are not suited to be family companions because of their unstable temperaments. Cordoba Fighting Dogs are known to maul even their owners and handlers.

The Cordoba Fighting Dog was specifically developed for combat. Before this breed became totally extinct, it was commonly used by gangs and criminals to guard hoards of contrabands and drugs because of their fearful and intimidating appearance. The Cordoba Fighting Dogs appearance is only seen in photographs as this breed that was created in the 19th century is now extinct. This large breeds appearance is described as a cross between a Mastiff and a Boxer. This dog has a lean compact and well muscled body. The strong shoulders are well muscled and broad. Wide chest provide ample space for heart and lung. The dog has a mediocre nose. Ears are usually cropped. Powerful jaws and strong teeth provide this dog with a vice-like grip. The short coat is predominantly white with dark spots on the head and on the body. Some specimens are seen with fawn, yellow and red coats.

A Cordoba Fighting Dog is a very fierce, very aggressive dog with a high threshold for pain truly the quintessential fighting dog! The dog is strong, vigorous and has immense stamina but it lacks stability. If this breed is still in existence today it is highly probable that this will be one of the banned breeds. These dogs, no matter how well trained will still manifest its aggressive temperament. The dog will never be a good pet. Due to their size and the ferocious temperament the dog will be dangerous to people. A Cordova Fighting Dog is known to attack its owner. Needless to say, the dog will be dangerous home companion especially in a family with children. This breed is also extremely aggressive towards other dogs. A Cordoba Fighting Dog would rather fight than mate. These dogs are not hunted in packs as instead of finding a prey the dogs would fight each other. Because of the unpredictable temperament owners and handlers make sure that the dogs are securely kept in a kennel.

Over breeding is one of the reasons why this breed is now extinct. Inbreeding has resulted to deafness, skin problems and other genetic health concerns. However, if this breed is still around today, it would not need an extensive grooming routine. These dogs are usually kept in kennels. They are valued for their fighting abilities rather that for their appearance thus an owner of this breed can get away with occasional coat brushing.

The bloody and cruel sport of dog fighting became extremely popular in the 19th century when bear baiting was banned. Dogs that were once used to rile the bears were developed to fight each other in a dog fighting pit. These fighting dogs are highly prized by dog men as aside from being an exciting and enjoyable spectacle, dog fights involve huge amounts of bet money. By late 20th century dog fighting was banned in most countries. Dog fighting is illegal in Latin America but this cruel sport has flourished illegally in clandestine locations in Argentina especially after the Cordoba Fighting Dog was created specifically to be a fighting dog. The Cordoba Fighting Dog is a highly aggressive breed that was developed in Cordoba, Argentina by crossbreeding Spanish Fighting mastiff, Bull Terrier and Old English Bulldog.

The Spanish Mastiff is believed to have descended from the Ancient Molossus dogs. These are extremely large dogs used as war dogs, fighting dogs and hunting dogs that hunt wild boar and other large game. The Bull Terrier with its egg-shaped head and Roman muzzle are dominant, strong willed and extremely aggressive breed. This muscular and strongly built breed is noted for its intelligence. The Old English Bulldog is now an extinct breed but the appearance was correctly represented in the 1817 Crib and Rosa painting of Samuel Raven. This breed is particularly noted for a lower jaw that projects in front of the upper jaw giving the dog its legendary vice-like grip. The Old English Bulldog is an athletic dog with a fearless and alert temperament.

With these notable breeds as progenitors, it would not be surprising for the Cordoba Fighting Dog to be a breed with legendary fighting prowess. The white coat coloring is from the Bull Terrier, the fierceness, the aggression and the strength are traits inherited from all the three progenitors. The Cordoba Fighting Dog was a highly valued breed when the dog fighting popularity is at its peak. Dubbed as Cordobas great white gladiator, this breed is the pride of Argentina. This fighting dog has legendary abilities to attack and defeat not only other dogs in the fighting pit but also other large wild animals. This breed that is noted for its high pain tolerance would never turn or back away from a fight even when mortally wounded. This dog will fight to the death.

Unfortunately, the Cordoba Fighting Dog is now an extinct breed. This highly aggressive breed is highly prized as dog fighters but they have little use outside the fighting pit. These dogs do not make good hunters. Although strong and ferocious, they have very poor sense of smell. Moreover, these dogs are not hunted in packs as instead of hunting, the dogs would rather fight. Highly ferocious, a male dog would often kill a female while mating thereby lessening the possibility of new generations. Over breeding to create an outstanding hunting dog has caused health concerns that made new generations of the breed vulnerable. When the cruel sport of dog fighting was banned, the Cordoba Fighting Dog became redundant. Breeders have no more incentive to continue breeding. This legendary breed though has left a legacy. The Cordoba fighting Dog became the foundation stock of a new breed the Dogo Argentino.