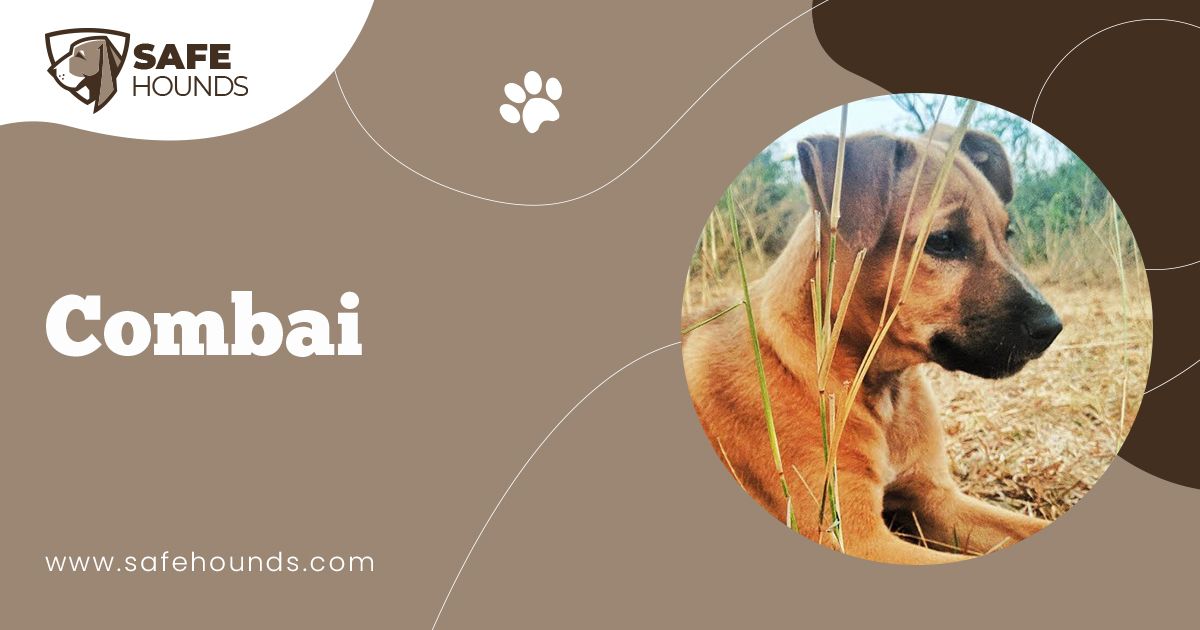 The Combai is a hound type dog that originated from South India. The breed was named after the town Kombai. The Combai and the Rajapalayam, another Indian dog breed is prevalent in Tamil Nadu. The Combai is often mistaken as the Rapalayam hound but compared to the Rajapalayam, the Combai is a shorter dog with a heavier stature. This breed usually has a brown or red coat and a darker colored line of hair along the back. Similar to a Rhodesian Ridgeback, the Combai sports a ridge of fur on its back that grows in the opposite direction to the growth of hair on the rest of the coat. Hundreds of years of natural selection have made this breed hardy. The dog has an easy to maintain coat that is more immune to external parasite infestation, to infections caused by yeast and fungi and to the common canine skin problems. Man had intervened in the development of some breeds to attain desired appearance and traits. Unfortunately, this has caused health concerns for the breed. The Combai, being developed through natural selection is less prone to canine diseases.

This breed has a savage temper that is comparable to the temperament of a Bull Terrier. The dog also boasts powerful jaws. During the ancient times, these dogs were originally used to guard cattle and homesteads from the attacks of wild animals like lions and leopards as it has the ferociousness of a Rottweiler. Being a hunter and a guard dog, the Combai is expected to have an aggressive and vicious temperament. This dog though has the reliability, the loyalty and the obedience of a German Shepherd Dog. This sensitive and intelligent breed would make a wonderful addition to the family. Unfortunately, these dogs are hard to come by. These dogs that have hunted since the 9th century when India is still under the rule of the Marava Kings, the dogs that have fought with the Marudhu brothers in a revolt against the British conquerors now exist in very small numbers in Tamil Nadu.

The Combai is a medium sized dog that has the appearance of a Dingo. This hardy breed is a noted hunter of deer, wild boar and bison as it is well equipped with an athletic muscular body, strong jaws and powerful legs. The dog has a moderately sized head that is proportionate to the rather short but well developed compact body. The dog has a slightly long tapering muzzle, a black mouth and pendent ears. The long and muscular neck sits on muscular shoulders. The Combai is a short coated breed. This breed normally has a rich red or brown colored coat and a black mask. The Combai is a rare breed. This breed is commonly seen in Tamil Nadu but relatively unknown even in other parts of India. As such the dog is often mistaken as the Rajapalayam. The ridge of fur along the back of a Combai distinguishes the dog from other Indian breeds. High set moderately long tail is carried erect.

Both the Rapalayam and the Combai are hunters. The Combai though is acclaimed to be a better hunter because of its savage temperament. These dogs fight lions and leopards thus it would not be surprising if these dogs will manifest aggressive behavior against other dogs and against humans. As mentioned, a Combais vicious temperament is similar to that of a Bull Terrier. In recent years, these dogs are commonly utilized as guard dogs. Very protective of its family, the dog will not hesitate to give its own life to save its people from danger. These are intelligent dogs. Although noted for their ferocious temperament they are eager to impress their master. A Combai is an easy breed to train especially if the master has established its position as the pack leader of the dog. A Combai will not do well in an apartment as this is a very energetic breed. The dog will thrive in a home with a large yard where the dog can satisfy its exercise requirements.

The Combai is a short coated breed. A potential owner opting to have this dog for a pet will be saved from the tedious grooming routine. Brushing the coat occasionally would be enough to maintain its good condition. Frequent bathing will not be necessary. The dog has pendent ears. This type of ears is prone to infection thus ears must be cleaned regularly.

The Combai Dog originated from India. These dogs are also known as Indian Bear Hound, Indian Beardog and Kombai. It was believed that these red or brown coated and black masked dogs have evolved from wolves just like the majority of ancient dogs. These dogs that were used to hunt boar, deer and bison have a long rich and proud history. The Combi dogs existence can be traced back to the 15th century. However, breed enthusiasts and natives of the southern parts of India believed that the breed has existed as far back as the 9th century when south India is under the influence of the Marava Kings. This theory though was not supported by documents thus it was not scientifically proven. Combai dogs are considered to be ancient treasures. These dogs have been used by the army of the Marudhu brothers. The Marudhu brothers, widely known as Marudhu Pandias headed the revolt against the British subjugation of the Kalaiar Koil of the Sivkasi Kingdom at the beginning of the 19th century.

The Combai is an excellent hunting breed. However, these dogs are not given much importance in India. The dogs are treated in the same manner other working animals are treated. Because no special attention was given to the indigenous dogs, the Combai is one of the native Indian breeds that have almost gone to extinction. Dog breeding became fashionable for the Indian upper class when foreign breeds were introduced with the coming of the British. However formal breeding programs were not done for the Combai breed. Combai owners are usually rural hunters that did not give much attention on the selective breeding of their dogs. The Combai were freely interbred with other dogs in the villages resulting to diverse morphological features. Other Indian dog breeds like the Chippiparai and the Rajapalaym have distinct morphological features. For instance the Rajapalym has a pure white coat and the Chippiparai is noted for its very lean body and for being a one master dog. Because of the mixed breeding, the Combai, aside from the ridge back does not have distinct traits that will differentiate it from mongrels.

Throughout the history of this ancient breed it has been used to track and to hunt. Aside from its excellent scenting ability the Combai also has the strength and the skill to work on any type of terrain even under difficult climatic conditions. The Combai makes an ideal home companion as well. The Combai is considered to be a rare breed. Years ago these dogs existed in large numbers in Southern India but because hunting has declined due to wildlife preservation programs breed population has decreased as well. While other countries have established programs to restore their indigenous canine breeds, India seemed to have made no serious attempts to preserve Indian canine breeds until in 1981 when a breeding unit was established in Chennai to breed the Rampur Hound, the Rajapalayam and the Combia. Presently finding purebred Combai would be difficult as the dogs are only found in some special kennels and in some areas in Tamil Nadu.