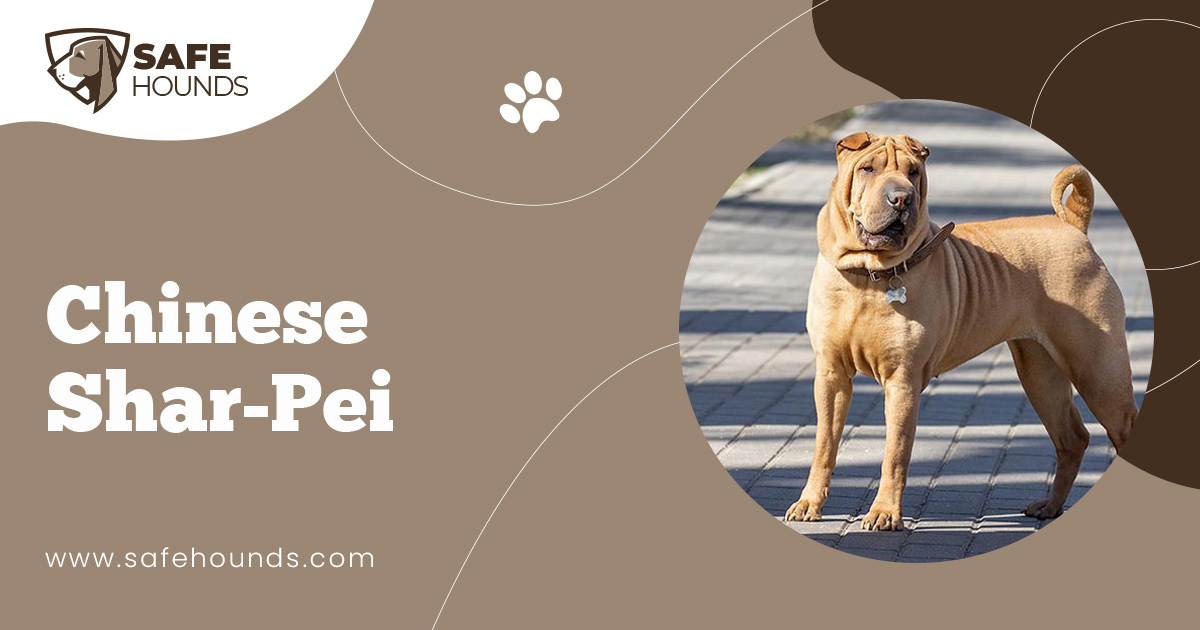 When a Shar-Pei is born, they are a bundle of wrinkles. The adult dog only has wrinkles on their backs, necks, and back legs. They are not large dogs they are considered medium. Their tail will curl up over their back. There are three different coats in this breed. The horse-coat, brush-coat, and the rare bear-coat varieties with the last not being recognized by the American Kennel Club. The bear-coat is what many consider a throw-back to the Chow-Chow. The horse coat is the rougher of the three and the brush-coat is smooth and longer. They are all colors and sables and a parti colored, which is not recognized again by the American Kennel Club.

Their ears droop forward and they have a curled tail. They are also like the Chow with the blue-black tongues. They have a broad wide head. They lose there wrinkles as they get older. Long ago, they were used as fighting dogs. The wrinkles helped them to get away when they were attacked as the wrinkles made it easier for them to slide through their attackers grip.

They range from 18-20 inches in height and about 35-45 pounds full grown. The colors are usually black, red, chocolate, cream, or fawn. They live about 8-10 years.

Many people have said their face, especially the muzzle reminds them of a hippopotamus. They have several colors they can be including red, fawn, chocolate, cream, and black. The red and cream are the most popular of the breed.

They have the curled tail giving them an unusual look. They have small ears, which emphasize the large muzzle even more. The males are a bit larger than the bitch, but they are all about the same length.

They look like they are frowning but they are very friendly and they may duck when you go to pet them if your coming from above because their eyes are hooded with fur. Always make sure you come from the front so they can see you.

Their feet are small and close together and they have strong and flexible pasterns for shock absorbers! This is another reason to keep toenails clipped as they will get in the way if they are too long.

The fur is somewhat prickly with the horse-coat and some humans have gotten a rash when it has touched them. The brush-coat is longer than the horse but still as harsh and when he is alerted to something he does not like, he can raise it about an inch by his hackles. If you see one with it raised, it would be best to stay at arms length until you know what is going on. You may have startled him.

If you are buying a Shar-Pei to show in the ring, remember they do not accept bear-coat and a parti-colored coat. Check your dogs appearance before you think of entering them.

Your Shar-Pei will be the clown of the family. They love to play and will never tire until you say you have had enough. They will get along with other dogs and cats as long as they are together from puppyhood.

The Shar-Pei is a dominant breed so you must take the upper hand with them and let them know you are the boss. If you let them walk all over you, then he will not listen to a thing you say. Let them know you mean business when disciplining them. Once he knows this, he will know his place in the family and be a devoted companion.

They are loyal to your family, but they will be a great watch dog. If someone comes too close, they will stand like a statue until brought down by you. They will let no harm come to anyone in their family. On the other hand, you do not want an aggressive dog either, so let them know there limits.

They need minimal care but regular brushing with a bristle brush will help keep the loose fur from getting all over when they shed their winter coat. You will want to make sure that if you live in a city that uses a lot of salt on their roads that you put Vaseline on their pads. The salt can burn the pads on your Shar-Pei.

They are very easy to house train, so much so, that they almost train themselves. They do not like being in a dirty environment.

They have tiny ears so make sure you clean them weekly because bacteria and other bugs like ear mites will make a home there because they do not get much air to them. Their toenails grow quickly, so keep them trimmed.

Do not bathe them too much because it will take the natural oils off the coat and dry them out. Monthly or bi-monthly baths would be good enough if your dog stays indoors a lot. Some vets say to only bathe them if they smell. The Chinese Shar-Pei is not fond of water, so bathing can be trying.

No one is quite sure, where the Shar-Pei came from and many think they are a descendent of the Chow-Chow, but the only thing that links them is the blue-black tongue. Many breeders have said they have been around for some 2,000 years. DNA tests that have been performed state the Chinese Shar-Pei are the most ancient of the dog breeds.

Pottery that has been discovered from centuries ago in 206BC, show what is believed to be the Shar-pei or at least ancestors of the breed. During that time, they were mainly bred for protection and hunting. After awhile they were bred for fighting. The wrinkly coat and the harshness of it made it easy for them to escape their enemy.

It was said during the Communist Revolution a Hong Kong business man named Matgo Law, rescued some of the dogs, and sent an appeal to all Americans through a dog magazine to help save the breed. Ever since, the breed has grown in popularity even though at that time they were very expensive to purchase. These days the Shar-Pei are around the same price as any other breed.

At one time, there were so few they were in the Guinness book of world records for the rarest dog in the world. Now, they have come back and they are growing by leaps and bounds. Because of their loving devotion to their family, they are bred for companionship and no longer for fighting.

There was not much information available on the Shar-Pei and what anyone learned was from other breeders trading information on their own dogs. Then in 1980, a stud book finally surfaced which helped a lot with the breeding ancestry.

In 1988, the Shar-Pei became a member of the American Kennel Club and it was recognized in the non-sporting group in October of 1991. The breed has gotten so popular that 6600 litters have been registered and it has gotten its place at number 25 in the 137 breeds registered.