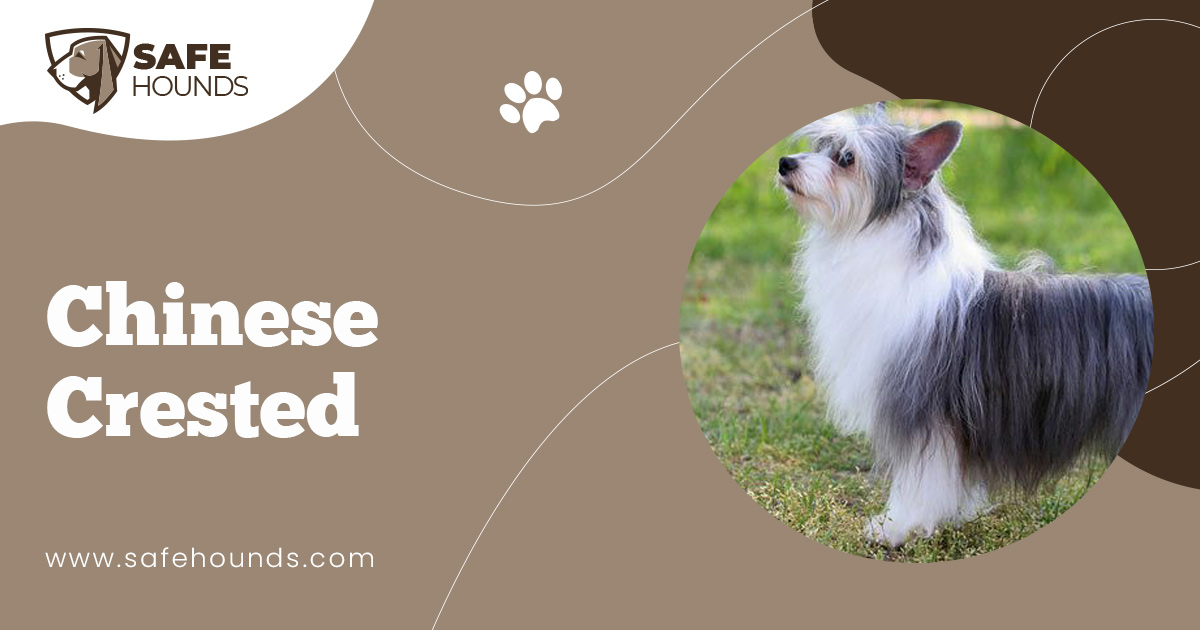 This dog is the snobbish of the breed, she will walk around graceful with her head held high as if to say she is all that. They make a great companion and are very loving and friendly. The Chinese crested is a member of the toy group and they are longer than they are tall. Their tiny little feet look like rabbits feet. They have larger erect ears and almond shaped eyes. The Crest is the silky soft hair on the head. They have hair around their feet which some refer to as socks. The body is hairless which is delicate and velvety. The powder puffs have a double coat that is long and silky soft. Their hair is mainly straight and of moderate length.

Many people when they first see the hairless and the powder puff think they are two different breeds when actually theyre one and the same. The hairless skin feels much like a humans, very soft. They only have hair on their head, paws, and tail. While the powder puff has a dense coat all over.

Some say a true hairless does not even have much hair on their head, tail, or paws. When you look at the skin on a hairless, the colors can vary from flesh colored to black.

The hairless breed usually does not have a full set of teeth.

The fur on a powder puff is grown out and groomed around their face in a style that somewhat resembles a terriers but they are usually shaved around the face. These pets are good for allergy sufferers because of their coat type.

Their skull is rounded and their cheeks are long, lean, and flat and go out into the muzzle. They hardly have any wrinkles at all. Their eyes are so dirty they appear black with hardly any of the white showing. Eyes are almost an almond shape and set far apart. Their ears are large and straight without any fringe except with the powder puff.

They have strong jaws with a perfect bite and upper teeth should overlap the lower. Mission of long and slender legs and elbows are held close to the body with their toes neither turned in or out. Missing teeth are not considered a flaw if you are going to have your dog as a show dog.

The Chinese Crested are very loveable dogs, which tend to stick to one person. If one member of the family shows them more affection and they know they will be secure then they will latch on to that person. They have been said to be singers when they bark and they have a beautiful smile when they show their teeth. It actually looks like they are smiling.

They are very energetic and love to play. They get along with children very well. This is one breed that you get that will be a lap dog. Therefore, if you enjoy your dog lying on your lap then this is the dog for you.

If you or any family members have allergies then this is the dog for you. These dogs only have to have a lotion or a bit of oil massaged into their skin to keep it soft and smooth. The Powder Puff requires you to brush it daily so they require a bit more attention than the hairless ones do. Neither one of these dogs will emit a doggy odor.

The hairless also require a sunscreen if they are to be outside for extended periods of time, because they will sunburn. The Hairless of course do not shed and the powder Puff will not shed a lot if brushed daily.

If you are a Chinese crested dog owner then you know how strangers stare at your dog. Some admire and others think they are ugly. No matter what you love yours and so did the people in China.

This is where it is said they originated from back in the 13th century. Many explorers and seamen reported that they saw hairless dogs in port where they pulled in, especially in Africa and Asia in the 1700s and 1800s. They figured they were kept to get rid of the vermin.

The breed was brought to North America and was known as Chinese crested. The women who worked together for forty years to promote the Chinese hairless were Ida Garrett and Debra Woods. Debra started a registration service and then established the American hairless Dog Club in 1950.

The records these two women kept were used for many years after their deaths to help with the pedigrees for many offspring. Another woman who became involved with the Chinese crested was Gypsy Rose Lee. Her sister rescued one and gave it to her, she loved the dog so much she became a breeder. Today, you may even find a dog you own has a pedigree that goes back in history.

The Hairless dogs have been loved and cherished all over the world and many breeders are becoming more involved with this popular breed. Many people are just curious and get them for a show-off until they have it for a while, then they are in love with it. They would not get rid of their Chinese hairless for all the money in the world.