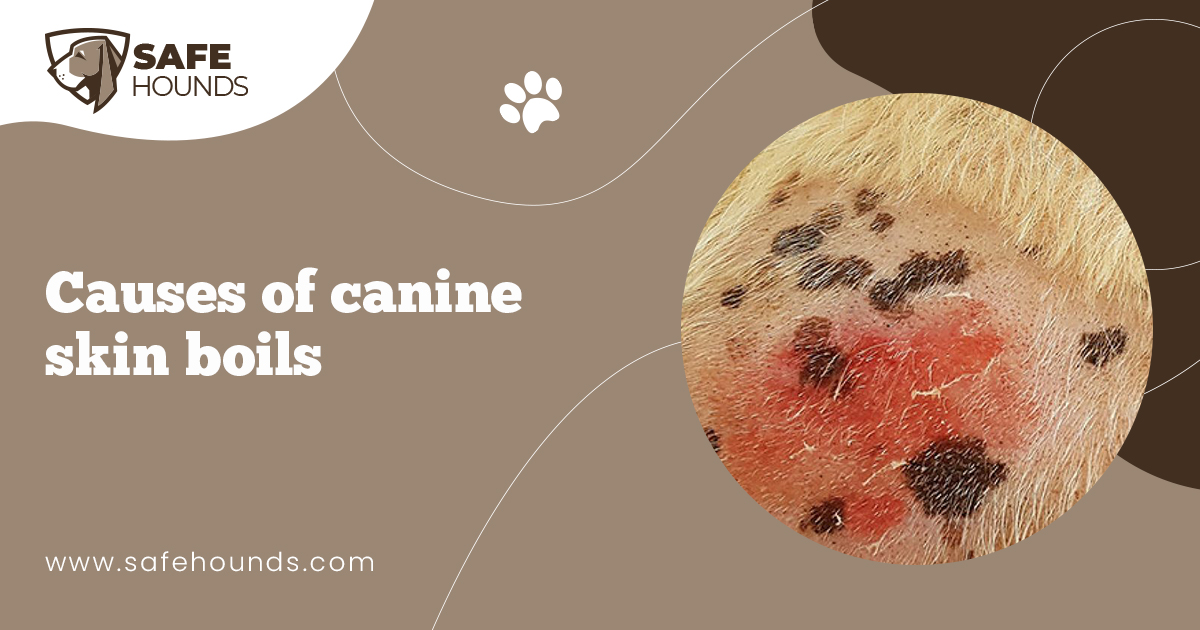 Boils can appear for a variety of reasons among them are allergies, bacterial infections, diabetes, immunosuppressant disorders, nutritional deficiencies, sebaceous cysts and poor hygiene.

Exposure to food and environmental allergens and irritants increase the risk of boils developing.

Bacterial infections are the underlying cause of boils. The reason for the bacterial growth are many. Some of which are outlined here.

Due to the effect diabetes has on a dogs hormones, it can increase secretion from the oil glands. This in turn may increase

Pet Peoples Place, describe how Demodex is a tiny parasitic mite, commonly present in the the hair follicles of both dogs and humans. They do not normally cause any harm.

If, however, the dogs immune system is compromised, the parasite may strengthen and become a clinical infestation, causing small boils to appear on the surface of the skin.

Boils caused by this mite commonly appear on dogs face, forelimbs and the muzzle.

A couple of boils are not in themselves an indication of Demodex mites. Recurring boils, pustules and skin wrinkling, however, may be a sign.

A veterinarian should be consulted if Demodex mites are suspected.

The food a dog eats can be a contributing factor to skin boils. Poor quality dog food with excessive fats and oils, increase the amount of secretion produced by the oil glands. This in turn can cause boils to form.

If a dogs immune system is not fully functional, it cannot effectively fight bacterial infections. This increases the likelihood of boils forming.

This can contribute to a weakened immune system, which in turn can cause boils.

While not a boil, a cyst can develop into a boil given bacterial or fungal growth.

This is the most common cause of skin boils in dogs.

A filthy dog, one which is not kempt or brushed regularly or one which does not receive an occasional bath, has higher risk of bacterial growth on its skin. With this, the risk of skin conditions, like boils, increase.

How do boils develop?

At their root, boils are localised skin infections. They start deep in the skin, at the hair follicle or oil gland. In the beginning they will form a small pus-filled outgrowth.

This eventually develops into a hard and very tender lump, which is quite painful for the dog.

Once the lump has swollen to its maximum size, the tenderness will disappear and it will soften. A head will form and the contained pus will spurt and drain.

While painful during the growth stages, they can easily be treated at home. With treatment, they will normally disappear as they are drained.

On Health says that the boil itself is not contagious. However, the bacteria that is causing the boil is. Until healed, it bacteria can spread to other parts of the dogs body, where new boils may form.

Therefore, make sure you wash and rinse before and after contact with a boil.

Where do boils appear?

Boils mostly appear on the abdomen, underneath the limbs and on the buttocks.

To identify a skin boil, look for:

Treating a boil can be done at home.

When treating it, the lump will disappear immediately and is usually completely healed within a week.

If the pus is not drained, healing may take longer and the help of a veterinarian may be helpful.

After treatment, theres a tendency for the dog to lick the infected area. In such a case, an Elizabethan collar can be used to prevent this and a potential secondly infection.

To treat a boils at home a warm compress is often used, says Cuteness.

You may consider clipping the hair to ease access to the boil before proceeding.

Dip a clean wash cloth in hot water and apply it to the boil. This will lessen the pain and draw the pus inside closer to the surface of the skin.

Apply it for about 15 minutes, several times a day. As the pus is drawn out, it will slowly drain.

If the boil erupts, you see foreign objects inside, it becomes hot and red or your dog gets a fever, do contact a veterinarian.

Some advice against lancing or squeezing the boil yourself, as this risk driving the infection deeper into the skin.

When a boil is treated by a veterinarian, it will normally be lanced and antibiotics may be prescribed to avoid further infection.

Carbuncles are a cluster of boils. It is formed when nearby boils are connected.

They are normally caused by Staphylococcus aureus – staph, entering the skin through the hair follicles says WebMD. As the bacteria enter, small scrapes and punctures occur, which opens the dog up for infection.

Carbuncles often require treatment by a vet and are likely to leave a scar.

A dog with furunculosis is prone to relapses throughout its life.

What is the different between a cyst and a boil?

The NHS writes that cysts are formed when keratin producing cells move deeper into the skin, instead of up to the surface, as they normally would do. Once they move deeper, they can multiply and begin to form a sac. The keratin produced is then secreted into the sac, adding a thick, yellow to it.

The sac is placed just under the skin.

It is generally harmless and sometimes disappear without treatment.

This is different a boil, which will form an outgrowth and is caused by a bacterial infection on the skin.

Sometimes a cyst can develop and become a boil.

What is the difference between boils and abscess?

Dog abscess, like boils, is caused by a bacterial infection. Skin abscess may easily be confused with a boil.

Abscesses are generally larger and deeper than boils. The affected area is typically red, swollen and painful.

While a boil can be up to 2 cm (the size of a penny), abscess covers a larger area and is raised. Typically 1 – 3 cm, but can grow to be much larger writes MSD Manuals.

Also known as a vesicle, is a elevation marked out on the outer layer of the skin.

It is filled with a clear water-like fluid, called serum.

Also known as impetigo, is a skin infection caused by bacteria.

It is recognised the presence of papule or pustules on the skin. They are often raised a bit, red in color and contain pus. In addition circular crusts, dry and flaky skin, hair loss and itching may exist.

Some say that it looks similar to pimples and hives.

To treat it, antibiotics is generally prescribed by a veterinary. In cases, where it recurs, a skin culture is taken and the type of antibiotic may be changed.

Apart from parasites are there any other causes of skin disease in dogs?