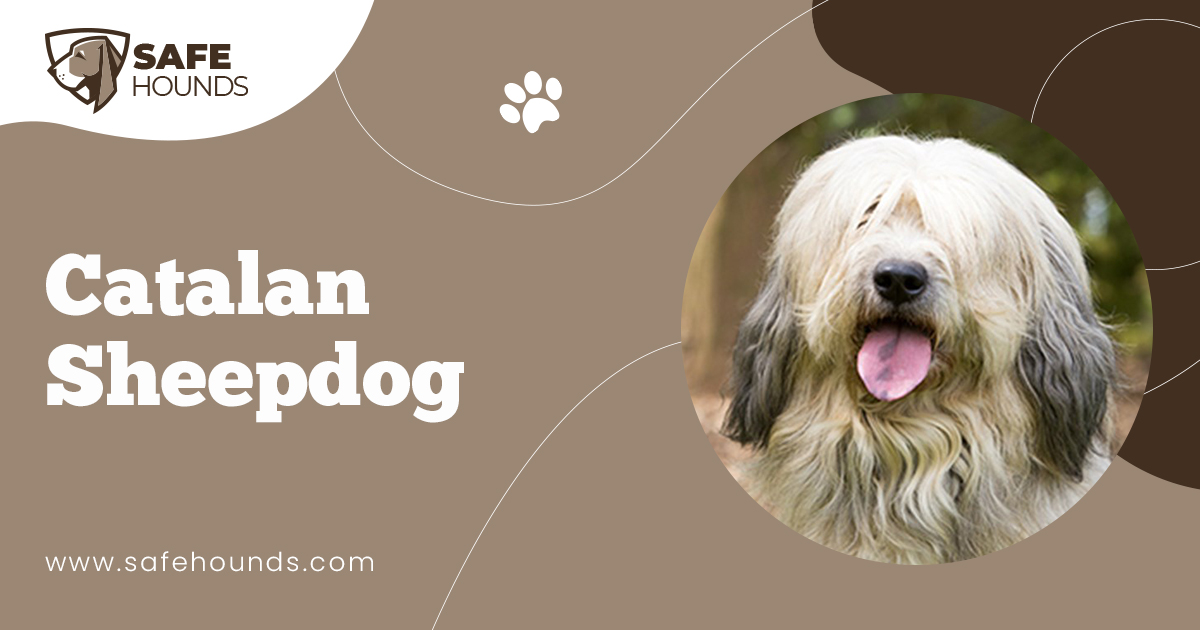 Perro de Pastor Catalan is another name for the Catalan sheepdog that was bred in Europe specifically in Catalonia, Germany Finland and Sweden. This is a high spirited and cheerful dog that does the doggy dance very well, an intelligent and agile breed that excels in dog sports. No wonder this breed was chosen to be the mascot of the 1992 Olympic Games.

However, driving and tending the flock is the true calling of a Catalan Sheepdog. These dogs have a natural instinct of caring for the flock. A Catalan Sheepdog would amiably perform the commands of the shepherd but in most instances the dog will act on its own, make its own decisions concerning the monitoring of the flock. This hardworking breed has been the able and irreplaceable supporter of shepherds for hundreds of years, vigilant and courageous and well able to protect the flock entrusted to its care. The Catalan sheepdog is a hardy breed. It can survive on small rations of food and work long hours. This breed is very resistant to hot or cold weather conditions, an all weather dog actually!

This breed makes a reliable guard dog. These are watchful and protective dogs by nature. A Catalan Sheepdog would always warn the household of the presence of strangers. They may be friendly with the family but they are wary of strangers. These dogs would even seem to be unsociable. This courageous dog can be relied on to defend the family and the property at all cost. Today, the hardworking Catalan Sheepdog is still utilized as sheep herders, the purpose for which this breed was originally developed for. This breed however, has a well balanced temperament, forms a strong attachment with the family and known to be very loyal. These qualities endear this breed to the family. From staying in the pasture with the flock, this breed has found its way into the hearts and homes of dog lovers.

The Catalan Sheepdog is an intelligent and active dog with a noble expression. Thus breed has an adorable appearance because of the long beautiful hair that can either be flat or slightly wavy. Long hair on the dogs head forms a moustache, a beard and tufted eyebrows. The ears, the tail and all the extremities are well covered with long hair. This breed of herding dog has a coat that is quite rough to the touch. The undercoat grows profusely on the posterior part of the body. The Catalan sheepdog has a unique way of shedding. Unlike other dogs, this breed shed in two parts. The first half of the body would molt first so that the dogs body would appear to be divided into two halves with different coats. Coat would be uniform again when the hind part has done shedding. At a distance the Catalan Sheepdog may seem to have a uni-colored coat. On closer inspection it will be noticed that the color is a mixture of different shades of fawn, grey and sable.

The Catalan Sheepdog is a well proportioned, medium sized breed with a rectangular body. Strong head that has a wide base does not show heaviness and is proportionate to the rest of the body. Straight muzzle appears like a truncated pyramid. Straight nose must be black. Dark Amber colored eyes are wide open and display an intelligent and alert expression. Black pigmented eyelids enhance the appearance of the expressive eyes. Triangular ears with pointed tips are set on high and hang close to the head. Long hairs that cover the ears form mobile fringes.

The strong well muscled body of this dog gives the impression of power, strength and agility. The neck is rather short but it is well muscled. The dog has a straight topline, a robust and slightly sloping croup and a well developed chest that reaches the level of the elbows. The curbed ribs allow good thoracic capacity. The low set tail is long and hangs down with the lower part forming a hook when the dog is at rest and will be raised but never rolled over the back when the dog is on the move.

The Catalan sheepdog is a hardworking breed. It enjoys being given a task to do. Primarily developed to herd and monitor sheep in Catalonia, this dogs can be depended upon to guard the sheep even without instructions from the farmer. The dog is courageous. This breed was utilized as guard dogs and messengers during the Spanish Civil War. This breed is known to have a pleasant well balanced character. If these dogs are not with the flock they can be seen inside the home, being the loyal and devoted companion of the family and an energetic but gentle playmate of the children. This is an affectionate and friendly breed, affectionate with the human family and friendly with dogs and other pets most especially if the dog was socialized from an early age. The friendly temperament though does not extend to strangers. This dog is naturally watchful and protective.

A Catalan Sheepdog forms a strong attachment with the family. This breed would always want to be where the master is. Highly adaptable, this dog can live outdoors with the flock as they can tolerate difficult weather. The Catalan Sheepdog is noted for its calm personality. This breed would do well in an apartment given that they are moderately active indoors. This is a working breed though. The dogs may be calm inside the house but they would still need to expend their excess energies. If these dogs are kept solely as home companions, owners must at least replicate the vigorous activities the dog is accustomed to. Long walks in the park or a couple of hours of playtime with the children would take care of the exercise requirement of the breed. The Catalan Sheepdog is a good natured loving dog but consistent training will still be necessary to develop the dog into a wonderful companion. Training will be a breeze as these intelligent dogs are attentive and receptive of the commands.

The long rough coat would not need extensive grooming but regular brushing would still be necessary. A comb or a firm bristled brush used three to four times a week would remove dead loose hair as well as prevent the formation of tangles. The dog may be bathed only when necessary so as not to remove the waterproofing of the coat.

The Catalan Sheepdog is an extremely ancient breed of dog whose origin dates back to the period of Roman Empire expansion. When the Roman conquerors arrived in the Iberian Peninsula around 200 to 100 B.C. they brought with them two types of dogs. One breed was used to defend and protect the Roman quarters, to tend their flocks of sheep as well as to help in attacking the enemies. The other, a dog with a lighter build was used to herd cattle. These dogs that were speculated to be the ancestors of the Italian Bergamasco were mated with the native Catalan dogs. Presumably, the crossings resulted to the foundation of various breeds of dogs found these days in the different parts of Europe. Aside from the Catalan Sheepdogs, the other breeds are Portugals Ca de Serra dAires, the Briard of France, the Petit Berger of the Pyrenees, the Nizzins of Poland and Great Britains Bearded Collie and Old English sheepdog.

For centuries, the Catalan Sheepdog has remained a versatile working dog. This breed has gained enormous popularity in Spain not only because of its being a prized herder of livestock but also because of its courage and good natured personality. The dog has become a much loved home companion. The dog was also utilized as a messenger and sentry during the Spanish Civil War. Spanish literatures have described the excellent herding abilities of this breed as well as the courage that makes this breed an outstanding guard dog.

After the 2nd World War, the dogs population dramatically declined. Some specimens were destroyed, others were rarely bred. Demographic movement is considered to be the major cause of population decline. During the 1950s and 1960s, a lot of farms were closed when people from the countryside moved into towns. Demand for the breed dwindled, the dogs fell to disuse. In 1970 a group of breeders worked together to regenerate the breed. Remaining specimens were found and bought from the shepherds and intensive breeding was begun. Today the breed is still considered to be rare but thanks to the dedicated breeders, the population is slowly but surely growing.