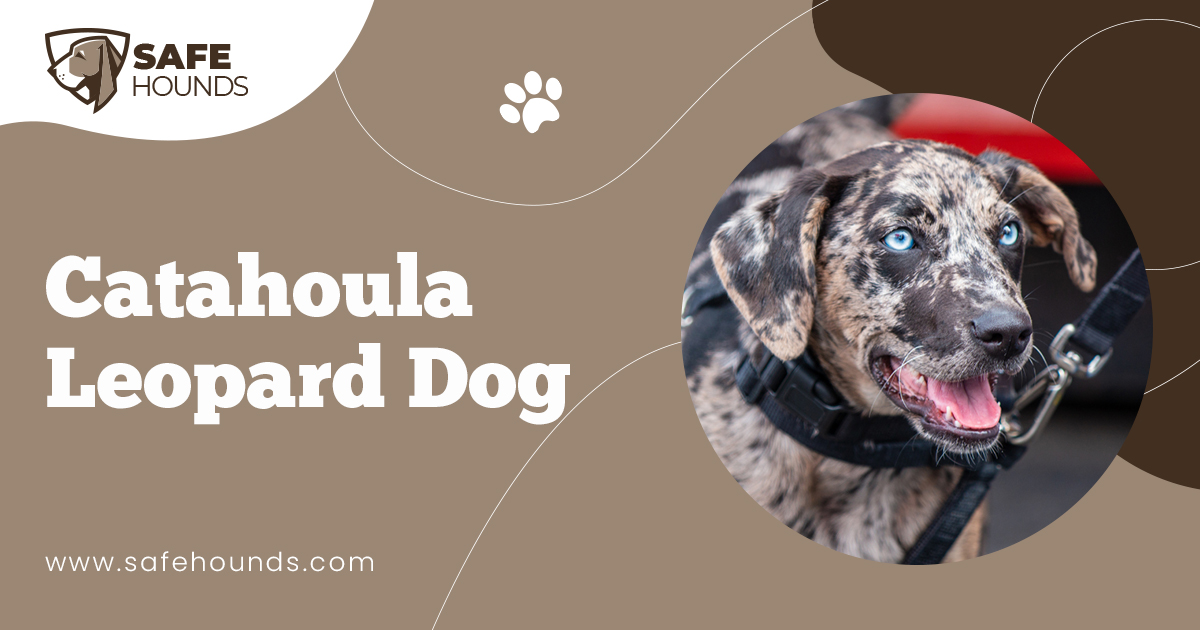 The Catahoula Leopard Dog is an active breed and is usually considered the most versatile of the working breed dogs. This breed is quite intelligent and is able to adapt to various situations. They are very capable at performing various tasks. Some of these include herding cattle, hunting various species of game, drug detection, and search and rescue.

Catahoula Leopard Dogs are true working dogs so they are not bred for uniformity of appearance. However, they do have some common characteristics that can help to identify them.

They can be many different colors and are almost always spotted. Because of the various colors available, they are difficult to identify just from their coats. Usually, they have merle coats, whether black and white, black and tan, or multiple shades of black and gray, giving them a blue coloring, similar to the appropriately named Blue Tick Coon Hound and Australian Blue Heeler.

The coat is usually short and thick. It is not prone to shedding and does not require much grooming.

Catahoulas have heads that are broad and flat with muzzles that are medium length. Their ears hang close to their cheeks. Catahoulas have light blue or golden brown eye color. They have very vivid shades of color.

Fully grown Catahoula Leopard Dogs are 22 – 26 inches in height for the males and 20 – 24 inches for adult females. Adult males can weigh up to 80 lbs and adult females generally weight between 50-70 lbs.

The Catahoula Leopard Dog is a stocky animal with a broad and flat skull. They have webbed feet and are very sturdy creatures. Catahoulas have a powerful and poised look.

The Catahoula Leopard Dog can be described as territorial, protective, and also independent. They are very loving pets toward their owner and family. Usually, they are reserved around strangers. Around the age of two, they usually mature. As a puppy, you really should not notice the shyness around strangers but as the dog gets older, it will become more noticeable. If the dog is timid on a leash, this is more of a sign of intolerance for strangers and not a sign of cowardness. The Catahoula does better with a dominant owner who will give the dog needed leadership and direction..

The Catahoula Leopard Dog has minimal grooming needs. It is recommended they have a bath a few times a year. The exception to that is if they become unusually filthy. They should have a good brushing once each week. It is important the nails of the Catahoula are trimmed on a regular basis and the teeth should be kept clean. When the Catahoula become stressed or nervous, they usually begin shedding more, especially if you pet them. The Catahoula is an average to light shedder.

Catahoulas need an extensive amount of exercise. They should be given a minimum of an hour run each day. This could be treeing, herding, or any other activity involving running.

The exact origin of the Catahoula Leopard Dog is not completely known for sure. The name Catahoula comes from an Indian word meaning clear water. It is reported that the breed originated from Nordic Wolfhound that was introduced 300 – 500 years before the Spanish arrived. According to reports, the state of Louisiana was the point of origin, specifically the area around Catahoula, which is a parish in the northeastern part of Louisiana. The breed was designated as the state dog of Louisiana in 1979. It was named after Catahoula parish and also after the spots on its coat.

At one point in its history, the Catalouha Leopard dog was used to round up cattle and feral pigs, livestock that had escaped from their owners and were living in the woods or swamp. This involved quite a team effort and much coordination and organization. An ideal dog team consisted of three dogs working closely together. Without cooperation, the pig would be able to kill all three dogs. Each dog had to be aware of what the other two dogs were doing while also being aware of the pig. Hunters would also use the Catahoula Leopard Dog to hunt tree raccoons. Primarily this breed was used to help with the difficult task of helping to round up unruly cattle and hogs.

It has been speculated that the Catahoula Leopard Dog descended from the mastiffs and greyhounds that Hernando de Soto brought into Louisiana in the 16th century. These dogs were also called war dogs and reportedly interbred with red wolves that were local to the area at that time. In the 18th century, the French began to move into Louisiana and they brought the Beauceron dog. These dogs mixed with the interbred dogs that were already in the area. This produced the breed as it is known today.