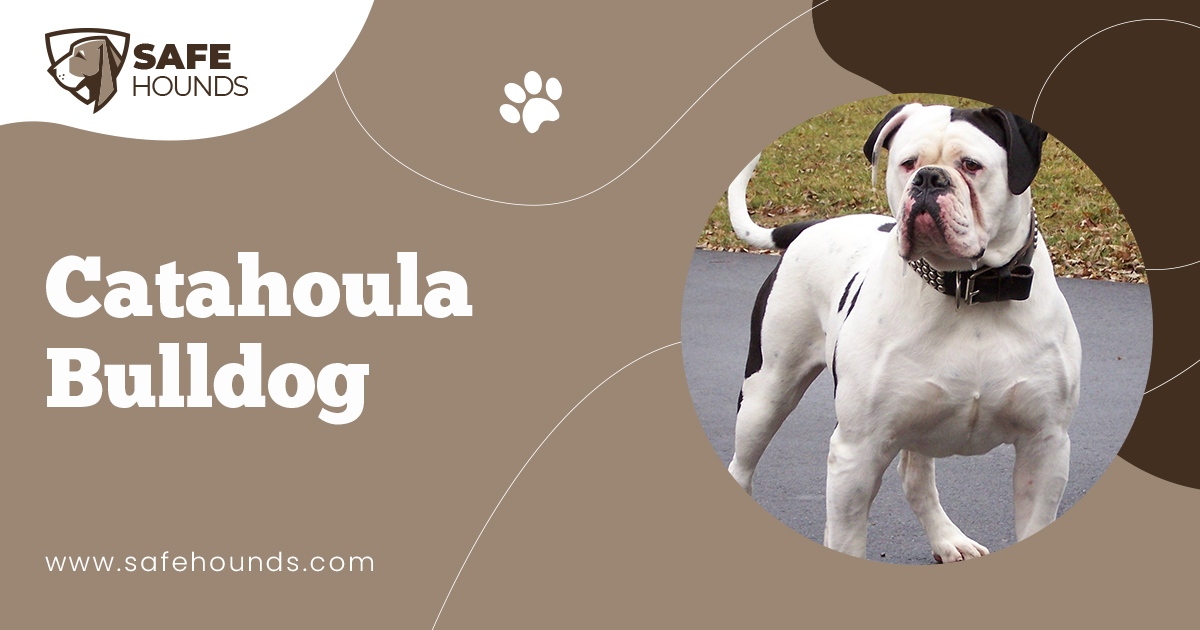 The Catahoula Bulldogs have gained popularity not only for their outstanding hunting traits. These dogs are noted for their striking appearance as well. A Catahoula Bulldogs rainbow colored coat has to be seen to be fully appreciated. No description can give justice to the aesthetic appearance of this breed. This breeds smooth pure white or merle colored coat is made impressive by the large and small multicolored markings. Eye color is another astounding physical trait of the Catahoula Bulldog. The marbled or cracked glass eyes enhance the appearance of this dog.

These extraordinary dogs have existed for over a hundred years. Breeders have successfully created an outstanding breed of hunting dog that catches hogs, tree game and hunts black bear. The Catahoula Bulldog is noted for its intelligent and laid back but alert temperament. The dog makes a dependable guard and watchdog as well as a suitable family companion. This breed does not have genetic problems. Ailments suffered by these dogs are common to other breeds. This fairly healthy dog has a life expectancy of 13 to 15 years.

A Catahoula Bulldog is not a purebred dog. Being a hybrid, the appearance of the dog may vary. A first generation Catahoula Bulldog is 50% Catahoula Leopard Dog and 50% American Bulldog. Succeeding generations though would have varied percentage of parent genes thus it is expected that this breeds appearance would slightly vary. Generally, a Catahoula Bulldog is a medium to large sized dog that measures from 24 to 26 inches at the shoulders and weighs from 75 to 100 pounds. This breed has inherited the American Bulldogs athletic and powerful build as well as the tight skin that is covered with very short smooth coat. Normally, a Catahoula Bulldog has no undercoat but dogs that are exposed to colder climates are noted to grow undercoats. The genes contributed by the Catahoula Leopard Dog gave this breed a variety of striking coat colors. The Catahoula Bulldog has aesthetic good looks because of their rainbow coat coloring. The dog can have a pure white or a merle coat. The coats impressive appearance is enhanced by large and small patches and blotches of gray, tan and black. A Catahoula Bulldog whose predominantly white coat is patched with chocolate, red, yellow and black would truly be an impressive and attractive dog especially if it has differently colored cracked glass eyes. The marbled or the cracked glass eye is a trademark of this breed. Eye colors vary from gold, brown, ice blue and emerald green. Heterochromia is common for this breed. A Catahoula Bulldog can have differently colored eyes. This dog can have rose or button type ears. Some specimens are cropped to give the dog a regal look. This breed can have a long or a naturally bobtail.

The Catahoula Bulldog is an outstanding working dog. This dog guards and hunts. A Catahoula Bulldog also makes wonderful household pets because of the loyalty, affection and devotion they have to their human family. The Catahoula Bulldog is a loving and gentle with the children. This fun loving breed would love playing with the kids and with other dogs as well. This is a hunting breed but it does not show a dominant temperament towards other dogs. The Catahoula Bulldog has a laid back temperament but this calm dog has a well developed protective instinct. The dog will instantly turn on the alert mode if there is a need to protect the family. This breed adapts well to obedience training as apart from being intelligent, the dog also has the eagerness to please attitude. Of course it would be necessary for the owner to be patient and to show strong leadership position. As mentioned, the Catahoula Bulldog has a laid back temperament. This dog can adapt to living in an apartment as long as the high exercise requirements are met. A home with a large yard though would be more suitable. With a large space, the dog can take care of its own exercise requirement. The owner need not take the dog on long walks everyday.

The short smooth coat of the Catahoula Bulldog needs very minimal care. If you have this breed for a pet you wont need the services of professional groomers as occasional brushing would be enough to maintain the good condition of the coat. The hair though should be thoroughly brushed making sure that dead hairs are removed. Grooming would only take a few minutes but the diet and the exercise needs of the Catahoula Bulldog must also be given consideration. This is a working breed. As such it would have high exercise requirements. The dog must be regularly provided with opportunities to let off steam. Well balanced diet is also necessary to maintain the physical health of the dog.

All breeds of dogs are valued for a particular purpose. Having been viewed as mans best friends for thousand of years, most dogs are kept as pets/family companions. Dogs though perform a lot of varied roles. Dogs are developed for hunting, for guarding and for herding. These days, dogs are commonly trained to be guide dogs for the handicapped, as search and rescue dogs and as bomb and narcotics sniffing dogs. It has been a common practice to breed two different breeds to produce a dog type with the desirable traits of both parents. The Catahoula Bulldog is a result of such crossbreeding. The Catahoula Bulldog is in fact a Louisiana Catahoula Leopard Dog and an American Bulldog hybrid.

The Catahoula Bulldog is an old American hybrid. This dog has been in existence in the southern regions of United States for over a hundred years. Some hybrids are developed accidentally. Accidental mating between two purebreds can result to a dog type that will have the traits of the parent dogs. The Catahoula Bulldog however, was specifically developed by breeders for two reasons. One is to create a dog that would have excellent abilities to be a catch dog. The other purpose for creating this hybrid is to develop a bear dog that will be utilized to hunt the North American Black bear.

Catahoula is an Indian word that means clear water. The name was given to the Catahoula Leopard Dog because of the breeds striking and impressive pale blue glass eyes. This breed that was speculated to have developed from the war dogs of Hernando Sotto is also known as Catahoula Hog Dog. These dogs were originally used to herd cattle and to lure hogs into the pen. These dogs are also used in hunting hogs. However, because the Catahoula Leopard Dog is neither big enough nor tough to catch hogs, hunters need to bring along catch dogs. Breeders have then thought of introducing the American Bulldog as it has the reputation of being an outstanding catch dog. The American Bulldog is already noted for being an excellent bear hunter. The dogs aggressiveness coupled with the massive size and the powerful jaws would produce an outstanding breed if combined with the speed, endurance and intelligence of the Catahoula Leopard Dog.