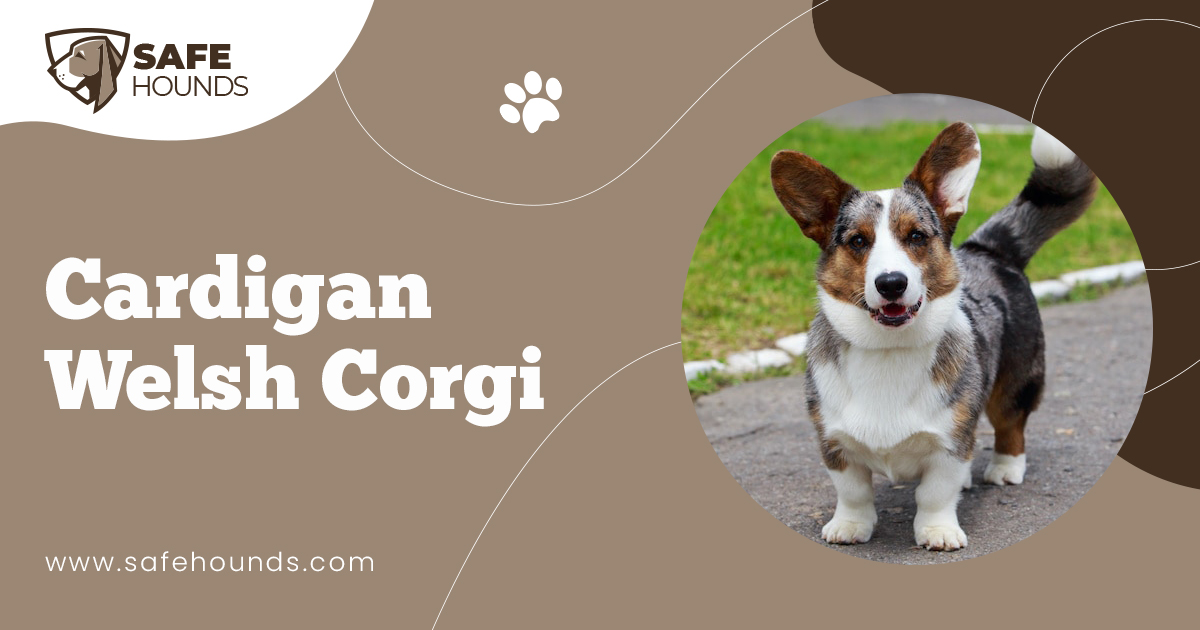 Cardigan Welsh corgi is one of the worlds oldest herding breeds around. This breed originates from Wales and is one of the two separate dog breeds of the Welsh corgi. The other breed called Pembroke has shorter ears and their tail is often docked. This is the other kind of Welsh Corgi breed.

People know the breed by Cardigan Welsh corgi. The breed also has other nicknames such as Cardigan, CWC, and Cardi. Therefore, if you hear any of these names you will know what breed they are referring to.

The appearance of the dogs coat has two different coats on the breed. The first coat is a harsh medium length outer coat with a soft dense inner coat. The coat can ruff in some spots such as on the back hind legs and on the underside of the tail. The color of the coat is colors like brindle, blue merle, black, black &amp, tan, black &amp, brindle, sable, and red, often with white markings. This breed is known to have white on the chest, neck, legs, muzzle, underneath their body, and sometimes on the tip of the tail.

Many Cardigan Welsh corgis have lost their life by defending their home. They also have a tendency at nipping at peoples heals because of their herding ability. The dog can be trained not to do this when they are not being used to herd animals. The Cardigan Welsh corgi can also be a barker. Their bark is loud and will alarm anyone of someone coming to your house. They are very good for guard dogs since they will bark and warn their family when strangers approach. They may be small but their bark is much bigger.

The Cardigan Welsh corgi does need some exercise as they can gain weight very easily. You do not need a big yard for them to play in, but enough to give them some kind of exercise. This breed makes a good pet for small houses and apartments. This breed is a very active dog and tends to have a lot of energy.

The grooming of the Cardigan Welsh corgi is pretty simple. They only shed two times a year. To brush them, just take a wire bristle brush and brush them. In addition, you will only need to bathe them when they are very dirty. They do not need baths on a regular basis. The Cardigan Welsh corgi may shed at times, but it will not likely be much though since they only shed two times a year.

Due to the fact that the back on a Cardigan Welsh corgi is fragile, you must know how to properly handle the dog. When picking up the dog, place your hands behind the front legs and the other on the hindquarters to give it the right support. Also, make sure your Cardigan does not jump off furniture or other high places.

The Teckle family of dogs produced the Dachshunds and it is said that the Cardigans also came from that family as well. The Cardigans are the longest living and the oldest herding breeds around as of today. It is believed the Cardigan Welsh Corgi has been extinct in Wales for over 3,000 years now. The Cardigans originate mainly from Wales and as of today, they are mainly used for companionship.

Many years ago, the breed consisted only of brindle and red colors as this was done with crossbreeding with collies. As time went on the colors of the Cardigans grew to the colors of tricolor and blue merle. There are also a few other colors that appear as of today in the Cardigans.

Corgi is a phrase that can be translated to mean dwarf dog in the Welsh language. In older times, this breed used to be called yard long dogs. Now with today, the name comes from the fact that the breed originated from Cardiganshire, Wales.

The Cardigans were normally just for watching over the farm, but they started taking on traits of cattle driving, herding sheep, and many more. Still to this day, not only are they a great pet to have as a friend, but also are still highly rated for their herding, working, and their skills to guard. When herding farm animals they did it by nipping at their heels and barking. This drove the animals the way they wanted them to go. The reason they are such good herders is because of them being so small and low to the ground, which gave them a quick chance to roll over when a cow or any other animal would kick at them while herding. The habit of herding still comes in effect when Cardigans are playing with each other and they might act like that with people if not trained properly.