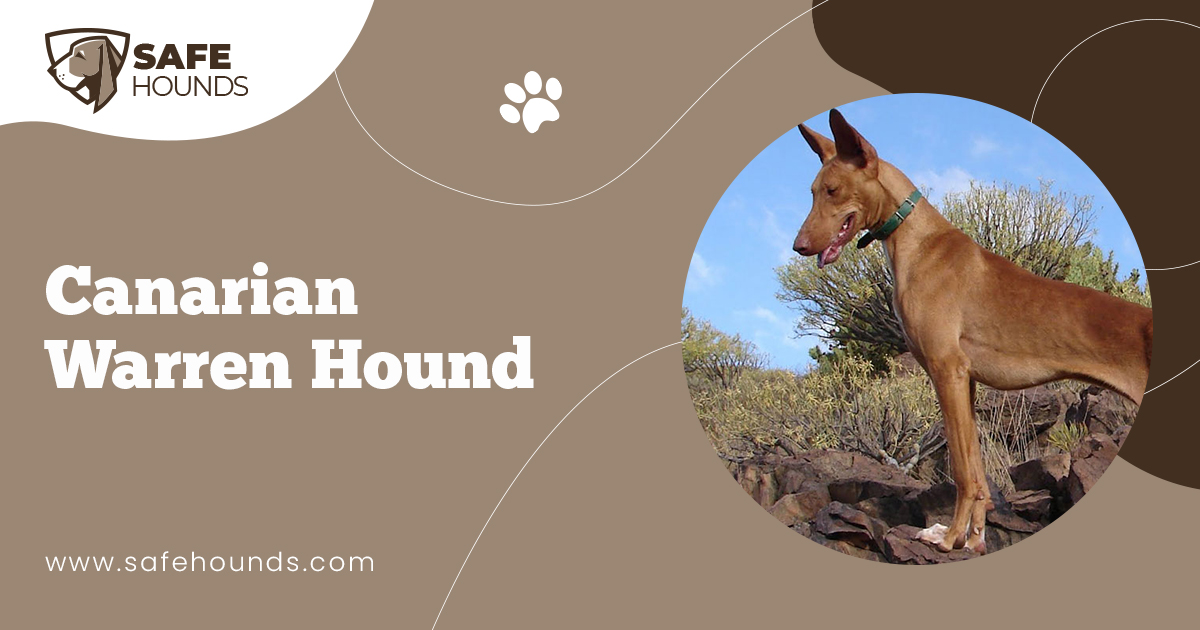 The Canarian Warren Hound was named after its place of origin, the Canary Islands. This ancient breed is also known as Canary Island Hound and Podenco Canario. Believed to be introduced by Mediterranean traders to the Canary regions, this breed was most valued because of their excellent hunting abilities. The Podenco Canario is a passionate and tireless hunter. This dog will hunt form dawn till dusk and would still show great stamina long after the human hunter had called it a day. This is a versatile breed. Hunters would never go wrong by choosing a Canarian Warren Hound as a hunting companion. This breed is a sight hound and a scent hound that uses its ultrasensitive sense of hearing to track a prey. Rabbits and ferrets hidden in natural crevices, in wall cracks, under thorny bushes, under piles of stones will surely be detected by the dog.

The Canarian Warren Hound is a medium sized dog with longish body. Slender but muscular, this hardy light footed dog that moves at an extended energetic trot has the capability to run all day. This breed was originally developed to hunt. For centuries, this breed had honed its hunting instincts. The Podenco Canario is a dog that is full of character. This is an intelligent breed that thrives on companionship. The ancient breed that was valued for its hunting prowess has found another occupation in recent years that of being a wonderful, loyal and obedient home companion. This affectionate and obedient breed is known to have an outgoing and curious nature. The Podenco Canario would always look up to its master for commands and guidance. This intelligent breed is for ever curious and eager to learn thus obedience training will be a breeze. Easy to train, the dog learns impressive tricks.

These dogs are not fussy eaters. This quiet breed is an ideal companion as it does not bark without a reason. Moreover, these dogs are not predisposed to major health concerns. However, the Canarian Warren Hound is considered to be rare outside of Spain. If you have decided on this breed not only would you have to pay a high price for a puppy but you also have to be patient as you will be placed on a long waiting list.

The Canarian Warren Hound is a medium sized dog whose long slender body gives the dog an emaciated appearance. This breed has a well developed skeleton. Due to the absence of fat layers, it is possible to see the spinal column and the rib cage. The hip bones are also very noticeable. Actually the dog is lean and it even has well developed musculature. A Podenco Canario has an elongated truncated cone shaped head that is perfectly proportionate to the slightly longer than tall body. The large prominent muzzle takes the shape of a blunt cone. The large nose has moderately opened nostrils. The flesh color of the nose is in harmony with the coat color. Lips are fine and tight. Lip color is also in harmony with the coat. Small almond shaped eyes of dark amber color have a gentle and noble expression. The rather big pricked ears are thick at the base and ends in a point. The straight rounded neck is well muscled.

A Podenco Canarios body is strong and has well developed musculature. The loin is elongated. The chest is well developed although not so deep to reach the level of the elbows. The tail is usually white, low set and slightly tapers to the tip. The tail may be hanging or raised sickle fashion. The firm skin that covers the body without forming folds is covered with short, smooth and dense hair. Preferred colors are white and red. Coat color can vary from orange to dark mahogany.

The Canarian Warren Hound makes wonderful pets because of its affectionate and friendly nature. The dog may be high strung and nervy at times but a well socialized dog, one that is raised with the children from puppyhood would be tolerant even with small children. Because of its social nature, the dog makes friends easily with other dogs and smaller pets. Unfortunately for apartment dwellers, this breed will require large spaces to run and play. This breed has extensive exercise requirements. A prospective owner that does not ample time to spare caring for the dog would best choose another breed. A Podenco Canario that is not given its required amount of exercise will be very difficult to handle. Yes, the dog is not a barker but it is a good digger! The dog has a high prey drive and an interesting smell or sound on the other side of the fence will make the dog dig. A bored Podenco Canario can make a tunnel under a fence in a matter of minutes. This breed will also manifest destructive chewing behavior.

The Canarian Warren Hound is a very clean dog that practically would not require grooming. The dog is an average shedder and the short coat would be very easy to groom. Occasionally brushing the coat with a firm bristled brush and wiping the coat with a chamois cloth would ensure the good condition of the coat. As mentioned before, these dogs are inquisitive and would enjoy to be allowed to run unleashed but not in cold weather. This dog is accustomed to working or playing outside in the summer months. But due to the short hair it can not tolerate cold weather.

The Chien de Garenne des Canaries or the breed of dog that is most commonly known as the Canarian Warren Hound is believed to be the direct descendant of the Egyptian dogs. This breed is considered to be one of the most ancient breeds in existence. This breed is about 7000 years old but it is believed to have been in the Canary region for less than 500 years. Ancestors of this breed were originally found in the Iberian coasts. These scent hounds are believed to have been brought to the Canary Islands by the Egyptians themselves or by the Greeks, the Carthaginians and by the ubiquitous Phoenician traders during the 1st millennium BC. Remains of these dogs as well as numerous statues, engravings and bas reliefs were found in the tomb of pharaohs. Proofs of the dogs ancient history are now found in the British and Louvre museums. In the Canary Islands where the breed originated, the dogs are usually called Podenco Canario. Large numbers of these dogs are in existence in the Gran Canary Islands as well as in the Isle of Tenerife. However, the breed is very rare in other parts of the world.

All through the history of this ancient breed, the Canarian Warren Hound was most valued for its excellent hunting abilities and for tracking hare and ferrets. This breed has a rather unusual hunting technique. These hounds usually hunt in packs. Using their excellent sight, their heightened hearing and scenting abilities, the dogs would run in packs and track down the prey. What is most unusual is that the dogs would not bark while tracking and neither would they go for the kill once the prey is found. The dogs would point at the prey and wait for the hunters signal to retrieve the game.

The war years have proven to be an extremely difficult times for any breed. The Canarian Warren Hound is no exception. This breed was on the road to extinction after the Second World War. Several breed enthusiasts have collected stocks from the remaining specimens that can be used as foundation stocks for the revival of the breed. The hard work paid off. The breeders were successful in repopulating this breed of hounds that calls the Canary Islands home. Presently, this breed has gained a stable population and although quite rare outside Spain, the Canarian Warren Hound, also known as the Podenco Canaria and Canary Island Hound was officially recognized by the United Kennel Club in July 1, 2006 and was registered as primitive breed by FCI under the dog section.