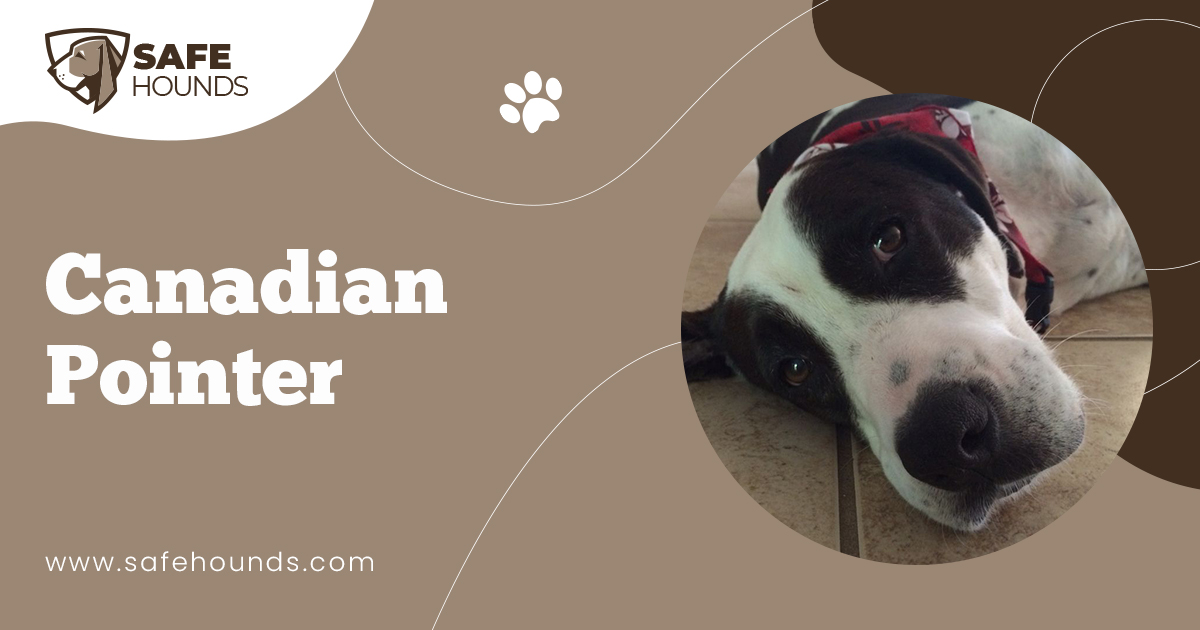 The Canadian Pointer, a breed of gundog that hails from the United States also answers to the name Adirondak Pointing Dog. Pointers are breeds of dogs with innate abilities to point. A pointer would stop on its tracks and assume the pointing stance by raising the tail and a foreleg and direct the hunter to the location of the game by aiming the muzzle towards the game. A pointing breed would typically exhibit its pointing instinct at the age of two months. The Canadian Pointer was developed from English Pointers, Portuguese Pointers and from Labrador Retrievers during the late 19th century. The Canadian Pointer belongs to the HPR breeds of dogs as aside from pointing, the dog also hunts and retrieves. This breed hunts rabbits, foxes and other upland game. This versatile hunter makes a wonderful home companion as well. A Canadian Pointer is an intelligent breed noted to have the canine eagerness to please atitude. Forming a strong bond with its people, the dog would always want to impress. This is a highly excitable breed. The dog has the inclination to jump on its favorite person. This can be dangerous as the dog can inadvertently hurt small children. This unwanted behavior can be eliminated with appropriate obedience training. Training would never be difficult for this breed as it has an obedient personality. It would be quite easy to train this dog little tricks as it would always be eager to learn. However, a Canadian Pointer is sensitive to criticism. An owner must establish trust and respect. The Canadian Pointer is one of the breeds that would respond well to training methods using positive reinforcement.

The Canadian Pointer is an excellent hunter but the dog has other talents as well. This is a loyal and affectionate breed. The dog makes a wonderful companion and family pet. This breed has a sweet and gentle temperament. Because of its lively and playful personality it gets along famously with the children. The dog has a well developed protective instinct. This territorial breed is also a barker. The dog will alert the family to the presence of intruders by barking. Socialization is necessary for this breed because of its high prey drive. A Canadian Pointer will tolerate other dog but it will be dangerous to smaller pets. The dog must always be leashed when taken to public places. This breed has a lot of go power. The high exercise requirement of this breed makes in unsuitable for apartment living. The dog would need a large yard to roam and to play. A Canadian Pointer that is not provided with the chance to let off steam would be a destructive dog. The dog will gnaw and destroy property, will dig tunnels and will annoy neighbors with its incessant barking.

The Canadian Pointer is a very easy breed to groom. Brushing the short coat with a firm bristled brush would be sufficient to maintain its good condition. Frequent bathing is not necessary. A damp washcloth will remove the dirt that clings to the coat. A chamois cloth rubbed on the dogs coat will bring out the sheen. This breed is an average shedder. Because the dog retrieves it would be prone to ear infection. Ears must be checked and cleaned after the dog is hunted.

The Canadian Pointer is a breed that calls United States home. Despite the name, this bred of gundog was developed in the northeastern part of the United States particularly in Maine and in the Adirondak Mountain ranges in the northeastern part of New York. This breed is believed to have been developed in the late 1880s. Similar to the history of other dog breeds, the history of Pointers is debatable as well. Records of pointing breeds in England date back as far as 1650. These breeds of gundogs are believed to have been brought to England from the European mainland in the 16th and 17th centuries. Pointers are compact athletic dogs noted for their high drive to hunt.

Pointers were brought to the United States in the later years of 1800s. Back then the Setter, another type of gundog that hunts quails, pheasants and grouse occupies the number 1 slot in the gundog popularity chart. Pointers were not even allowed to compete with the setters in field trials. Things changed around 1910 when Pointers start to dominate the hunting scene.