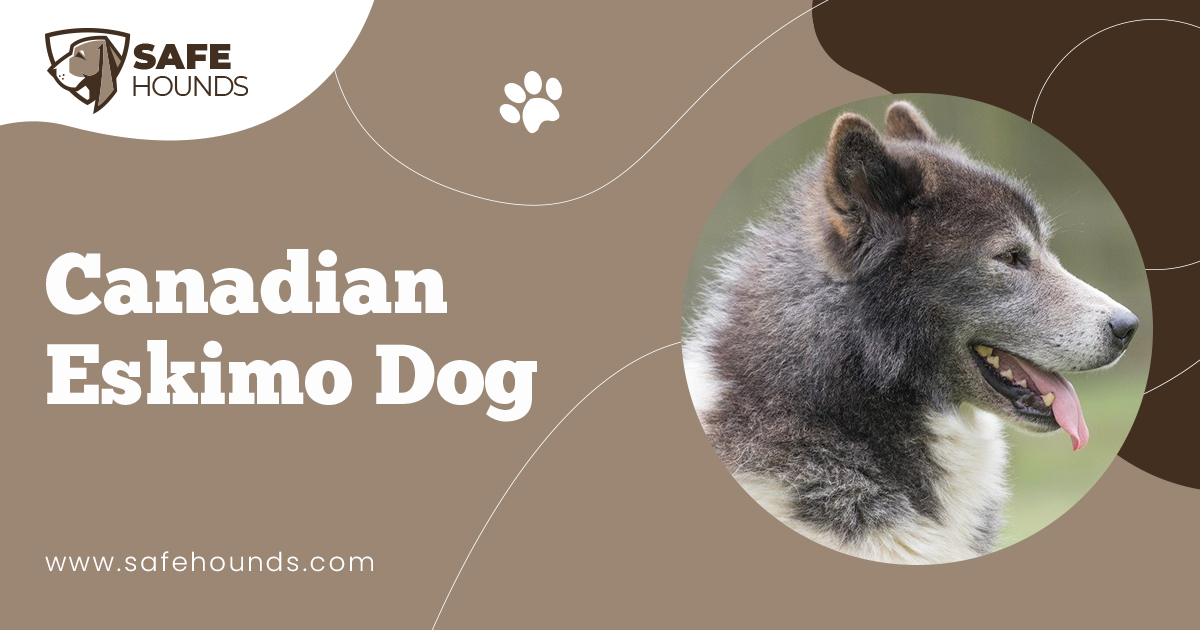 Inuit Husky, Quimmiq these are a couple of the many names given to the Canada Eskimo Dog. This breed is one of the five indigenous dogs of Canada. This Arctic breed is considered to be one of the oldest and the rarest purebred dog of North America. This extraordinary breed has a legendary history. This breed that has been with the Inuit people for over 4000 years has played a big part in the existence and survival of these indigenous people. The Canadian Eskimo Dogs that was then commonly called quimmiq have hunted seals, protected the people from polar bears and from other predators, have served as draft and sled dogs and have become the loyal companions of the Inuit. These dogs were one of the Arctic breeds chosen for expeditions. Sir Robert Peary, the famous Arctic explorer believed that the North Pole would still be unexplored if not for the Canadian Eskimo Dog. This is a breed of exceptional strength. These dogs have the abilities to survive even in the most harsh and bleak environment. The dog is noted for its phenomenal memory. The dog can find its way home even amidst a blinding snow storm. Add to this is the fact that these dogs can pull sleds for days on end with very little nourishment. The Inuit trains puppies to pull sleds as soon as they can walk. These sled pullers have sharp hunting skills as well. A Canadian Eskimo Dog can track a seal breathing hole even from a distance. This breed is an enthusiastic bear hunter. A sled handler would often call out nennook! (the Inuit name for bear) to encourage the dogs to pull the sled faster. A Canadian Eskimo Dog is a sturdy spitz type dog that is well equipped with a completely weatherproof coat that allows them to survive in the harsh Arctic climate. The hunting and the sled pulling abilities of this breed were established. The breed almost came to extinction. Breed enthusiasts and the Canadian government have made measures to save the breed from being lost to the world but breed population is still worryingly low.

A Canadian Eskimo Dog has an imposing appearance. The powerful physique as well as the typical spitz lush coat and bushy tail gave this breed of sled pullers its majestic appearance. Elegant the appearance may be but it can never be denied that this dog exudes immense strength and speed. The Canadian Eskimo Dogs large broad wedge shaped head is proportionate to the powerfully built athletic body. Medium length muzzle is tapered. Short thick triangular ears have slightly rounded tips. Ears that are densely coated with hair are turned forward and carried erect. Widely spaced and obliquely set eyes generally have dark irises but never blue. Some individuals can be hazel or yellow eyed. This breed has powerful jaws, close fitting lips and complete dentition that meet in a scissor bite. The neck is short but very muscular. The dog has broad muscular shoulders. Well developed forelegs are straight. A Canadian Eskimo Dog has a level well muscled back, deep wide chest, well developed loin and moderately sprung ribs. Hindquarters with good turn of stifle are not higher than the withers. Large almost round feet are well arched and thickly padded. The Canadian Eskimo Dog has a heavily feathered tail that is set moderately high and carried over the back. This breed has very thick and dense double coat. Stiff guard hairs are 8 to 15 cm in length. Undercoat is soft. Males have longer and thicker hair on the neck that forms an impressive mane and gives the dog additional height and bigger form than it actually is. Hair of female dogs is shorter. Canadian Eskimo Dogs can have any coat color. Pure white coated dogs as well as liver and black coated are most common. Dogs with solid coat colors can sport white marking on the face that forms a mask.

A Canadian Eskimo Dog is a loyal and affectionate breed that bonds strongly with its people. After the introduction of snowmobiles more and more Canadian Eskimo Dogs have become companions and recreational teams that provide transport for tourists. This is an alert and intelligent breed that enjoys the attention of people. This breed responds to training easily especially if the master manifests the leader of the pack attitude. It must be remembered that this is a pack oriented breed. The dog will tolerate other dogs but it can be dangerous to smaller pets. A Canadian Eskimo Dog has a strong prey drive as when they are pulling sleds they are expected to hunt for their own food. This breed is not for apartment living. Accustomed to staying in the open even in freezing temperature, this dog will be destructive if cooped indoors. Being a working dog it is expected that this breed would have high exercise requirements that cannot be met even if the dog is walked daily. Because of the dogs enormous amount of energy it would be best if a large yard will be made available for the dog. This dog would not be a suitable choice for a family with small children as this dog exhibits a strong instinctive reaction to play, food and to fighting.

The lush hair gives a Canadian Eskimo Dog its impressive appearance. The hair though would not need extensive grooming. Brushing the hair once a week would be enough to maintain its good condition and to stimulate new hair growth. This breed generally sheds once a year but dogs that are kept as home companions and live in temperature controlled homes are known to blow the coat in spring and in fall. During shedding season, the dog would need to be brushed everyday. Brushing will help distribute the natural oils that waterproof the coat.

The Canada Arctic regions have been the home of the Canadian Eskimo Dogs for at least 4000 years. These powerfully built dogs with the wolf-like appearance have migrated with the Thule civilization between 900 and 1110 AD to the coastal and archipelago areas which are now Greenland and Arctic Canada. The dogs that crossed the Bering Strait with the Thule Inuit have become vital to the survival of these indigenous people of the Arctic regions. The dog that was called quimmiq which simply means dog in the Inuktitut language of the Inuit is a multipurpose working dog. The dog is equipped with a thick double coat that allows it to survive the harsh climate of the Arctic. The quimmiq were used as a means of transportation and as draft dogs. The strong dogs can pull loads twice their weight. The dogs are capable hunters that hunt polar bears and seals. A quimmiq can easily locate seal breathing holes. These dogs have protected the Inuit people from polar bear and musk ox attacks. These dogs need very little nourishment to survive thus it does not deprive its people of the very necessary food. Without these dogs, the Inuit could have not survived as there were many instances when the dogs have served as emergency food supply.

As mentioned these dogs have migrated with the Thule civilization. This theory was supported by archeological findings in that era. Harness parts and sled runners found by archeologists indicate that the quimmiq were utilized as sled dogs. However, it was speculated that these dogs have a more ancient origin. It was speculated that the Canadian Eskimo Dogs were utilized as hunting partners by the people in the paleoinuit culture of 4000 BC.

The Canadian Eskimo Dog has stood both at the North and the South Pole. In the late 19th and early 20th century these dogs are one of the choice breeds for expedition use. However, breed popularity have waned when inventions and southern influence were introduced to the north. Using snowmobiles became the trend as apart from being faster it would not require much care unlike the traditional team of dog sled pullers. In 1950 it was estimated that about 2000 dogs are in existence. Breed population drastically decreased when dogs died from canine diseases brought by foreign breed that the Canadian Eskimo Dogs were not exposed to. Crossbreeding has further deteriorated the number of purebreds. In the 70s the Canadian Eskimo Dog is already on the brink of extinction. In 1972 a program to save the breed was initiated by William Carpenter and John MaGrath. The Eskimo Dog Research Foundation was supported by CKC and mainly funded by the Canadian Government. About 200 dogs were found from the remote Inuit camps and from these remaining specimens, dogs were selected be used as foundation for the reconstruction of the breed.