Can human laxatives be used on my dog? 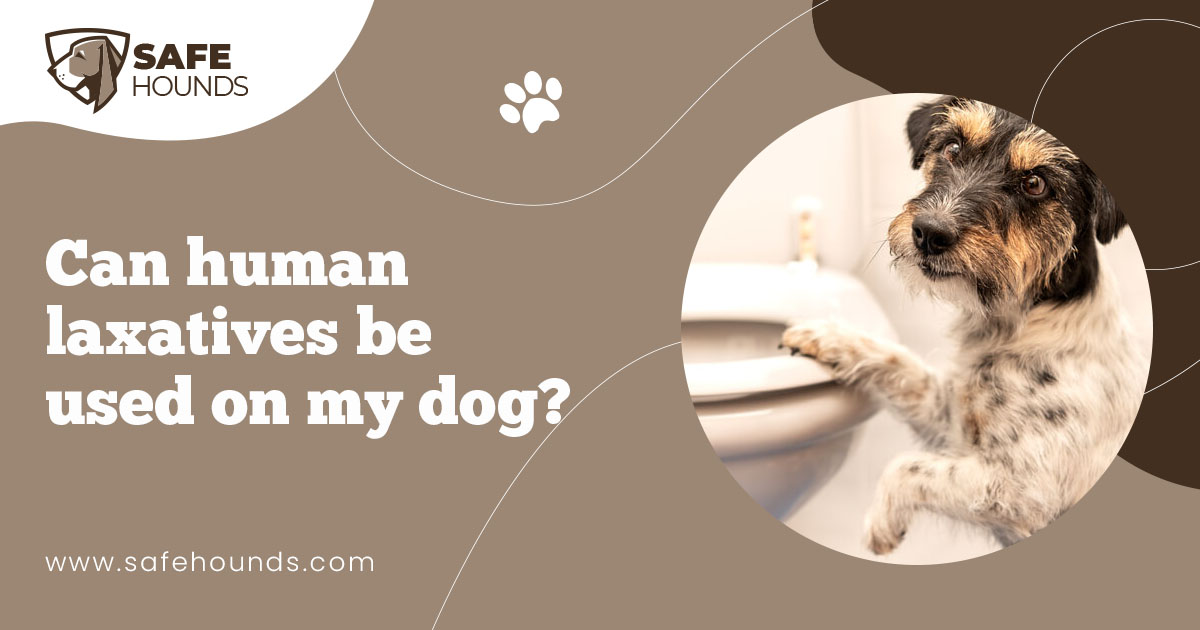 The health of the pet is of prime importance to a dog. But in spite of the precautions made by a dog owner to ensure the health of the pet, dogs still get sick. The cost of veterinary care would be an additional burden for a pet parent that is on a tight budget. Thus pet owners would delve into the medicine cabinet for human medications when the dog gets sick. In a pinch, owners would give the pet human medications. Would it be alright to give the dog the Milk of Magnesia or the mineral oil, or the Senakot you use whenever you are constipated?

Constipation, similar to diarrhea is a common ailment. Constipation is not a serious or life threatening concern thus it is common for constipated people to self medicate. There are many over the counter medications for constipation. It would be an easy matter to run to the nearest drug store and the painful bowel movement will be over in a flash. This is the reason why pet parents would commonly reach for the ever reliable bottle of laxative when the pet is noticed to be constipated. Human laxatives though are specifically formulated for humans. Dogs, in spite of some human-like behavior, are still animals. Thus it would not be a good idea to medicate the pet with human laxatives without consulting a vet.

Dogs, like humans get constipated one time or another. Dogs commonly go to the bathroom once or twice a day. A constipated dog is unable to pass any stool. The need to take the dog several times with no results would certainly be a hassle especially for a busy pet owner. However, consider the discomfort and the pain the constipated pet is going through. The inability of the pet to pass stool in one day is not really a big concern. The dogs system can usually solve the problem. Constipation will be a big concern if the dog is unable to poop for several days. A dog that cannot defecate will appear to be very uncomfortable. A constipated dog will be in pain thus decreased activity, lethargy, loss of appetite, walking difficulty and constant whining will be noticed.

As with any other health concerns, early treatment for constipation is necessary not only to ease the pain the pet is suffering from but also to prevent the development of other concerns. Left untreated, constipation can develop to indigestion, bad odor resulting from flatulence, bad breath, skin problems and worse to bloating and bowel cancer. Knowing what causes constipation is as important as the treatment. The inability to defecate is commonly caused by the pets diet. Dogs are commonly fed dry dog foods. This type of dog food has to be moist when it passes through the digestive tract. Constipation will occur if the dog does not drink enough water.

It has been the habit of dog owners to give human medication to the pet. There is a notion that what is good for the master must be good for the pet as well. However, it must be realized that human medications were formulated for humans thus no dosage was specified for animals. Human laxatives may enable the dog to pass stool but dogs that have drug allergies or health conditions could have a bad reaction to the medication. Moreover, a medication that is not prescribed by a vet may not be the appropriate cure for the health concern. Remember, constipation can also be cause by intestinal blockage. No amount of human laxative can deal with this problem.

Nothing beats seeking veterinary advice especially if the problem has persisted for days. Some human laxatives can be given to the pet but make sure that they are recommended by the vet.