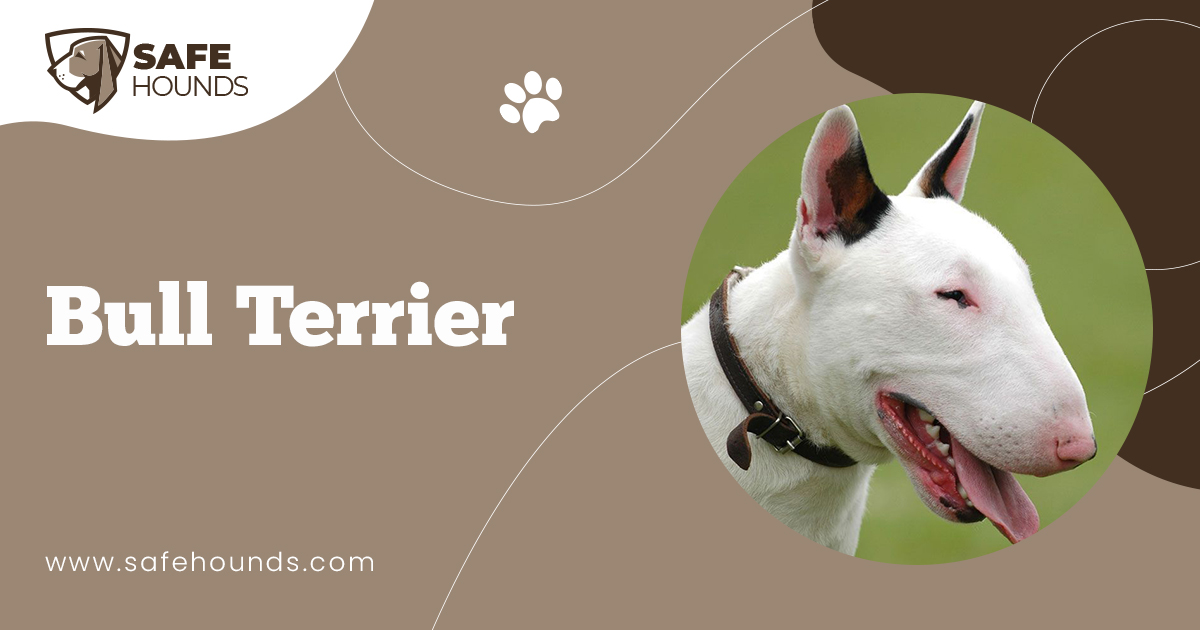 You may recognize the Budweisers commercial with Spuds Mackenzie who was a Bull terrier. When the Bull terrier was first introduced, they were bred for fighting. Now, they are a sweet companion to many families. Bull terriers are so playful and become extremely attached to their owner. Some people have compared their playfulness to that of a 3-year-old child. They continue to be active to the age of 5 to 6 years, because they always have to be doing something. They are not a breed to lie around and rest. If their activities are restricted then just like a three year old they will get into stuff. Usually they get into the garbage or choose to rip up pillows. You will come home to a home that is destroyed, if they do not have enough to keep them entertained while you are gone.

Because of their great attachment to the family, they make excellent guard dogs however, you have to watch them so they do not become overly possessive and jealous. If children are rough-housing, the bull terrier thinks they should interfere and they may start nipping or biting. This is where the discipline needs to be firm and constantly shown or this will keep up.

The Bull terrier comes in two colors that are solid white or colored. Their head has been said to look like an egg being very distinctive with very powerful jaws. Their face looks more threatening than they are.

Bull terriers are very muscular and have a head that some say looks close to that of an egg because it is so oval. They have triangular eyes that are very small and dark. Their coats come in solid white, white with markings, and brindle. Red, black brindle and fawn are also colors allowed in the American Kennel Club. The solid white ones are the favorite of the breeder sales with black running a close second.

The average height of the Bull Terrier is 16 to 22 inches and the weight is 35 to 60 pounds. However, they can be any size or weight because there is no set standard in place. Their eyes are set close and up high on the head. The eyes should have the sunken look and be as dark as possible. Their ears should be held very stiff and should be pointing upwards. Their noses are always black and have a downward tilt to it. They should be very muscular and have a taper from neck to tail without wrinkly skin the skin should be tight. Their legs should also be muscular and have no turning to the inside or the outside at all. They should stand firmly. They should have feet that look like cats, arched up, round, and close together. The Bull terrier tail should be tapered to a point and carried horizontally.

The Bull terriers looks can be deceiving which makes some people a little leery of them. If your family isnt ready for this powerhouse then you should find a different breed. They can be a bit over powering while playing. Their looks are comical while they play with each other.

You must remember the Bull terrier was bred to be a fighter and they are very independent. They were meant to be on their own without any type of guidance or leadership. They want to please their master but only when they think it is convenient for them not you. So, when you discipline them make sure youre the one in control. This isnt an option, it is required if you do not want this dog walking all over you. Spanking your Bull terrier wont faze them a bit, because they know no pain since they were bred to be fighters to the death. If you tell them that they are a bad dog, then the ears go back and they beg to be forgiven, but go right back to whatever they did a few minutes earlier.

Since they have short coats they do not need much care. Just a bath now and then and their coat brushed when needed. Brushing is more for the massaging than for care with the shorter coat and they do not shed much.

Because of their bulldog ancestry, they have a tendency to become overheated. They need to be watched in the summer for overheating. If they start to gasp for air and wheeze then find the nearest water and soak her to lower their body temperature.

Taking care of their nails is a must, to keep them down and not to injure their pads. Clean their ears with a mild cleaner monthly, watch their teeth for tartar, and give them chew bones to stop any build up.

It is believed the Bull Terrier came into existence with the crossbreeding of the English White Terrier, the Bulldog, and the Dalmatian. Some people think that later down the road the breed was also mixed in with a Spanish Pointer, Foxhound, and the Greyhound. It is also believed that at one time the breed was also mixed with the collie to get that long gated head. These dogs were created for the pure joy of dog fighting. They needed a small dog that could easily be hid in their coats when and if the police showed up. They needed to be swift and light weight because they had to last a very long time during a fight to the death against other dogs. The betting on the fights were the sporting enthusiasts of the 19th century.

When ear cropping was banned, this set the breed back several years and required the breeder to redesign the ear. The person credited with the development of the tulip ear is Harry Monk. The United States didnt accept this change and it wasnt until 1956 before the standard was rewritten calling for an erect ear.

The Bull terrier is mistaken for the Pit Bull and they are different altogether. The Bull Terrier is much smaller. When dogs are bred for a specific job, hence fighting, then they do just that. To stop the breed from doing the fighting then you need to breed to deter away from this characteristic. Now, there are the bull terriers that are bred down and are not as aggressive as they once were. Breeders are very proud of the dogs they produced that are trustworthy and great companions to their owners.

In 1895, the Bull terrier breed was added to the American Kennel Club. In 1987, the breed became more popular with the commercial mascot Spuds MacKenzie for Budweiser. Little did the public know, Spuds was a girl. The Spuds dog really shot the breeds popularity through the roof and breeders were getting calls from people wishing to own one of these adorable dogs.