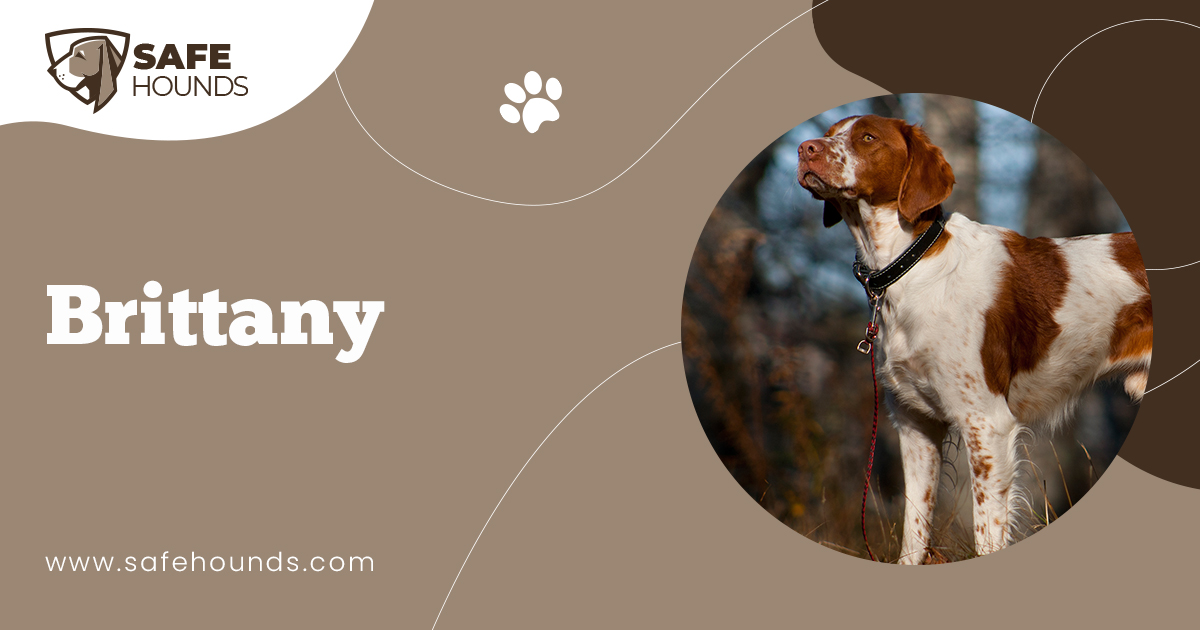 The Brittanys smaller size allows them to get into spaces where the bigger dogs cannot. The Brittany has a lot of energy and is medium sized with a light coat. They are very fast dogs that are very alert and happy to please their master. When a person starts training them for hunting they catch on fast because they are eager to please. He will go through the woods, open fields, through snow or any other type of terrain to bring back your bird for you. They are non-tiring and really love going into the water to get your bird for you.

They also make a great dog just for a pet. They get along with children very well because they are a very gentle breed. The Brittany is an exceptional dog and since hunting has gotten so limited with the land, they can run in small areas, find their game, and hold it until you get there.

They are a smaller breed of dog being only 30-40 pounds for the males and they stand from 17 to 21 inches in height. The females are usually an inch taller and they weigh about 10 pounds less than the males. They have the longer legs, which makes it easy for them to cover ground quickly. They are strong and have a lot of energy and they absolutely love to run. That is why you should have a big yard for them to get their exercise.

Being the smaller of the hunting breeds, they are especially easy to carry in the back of your truck in separate kennels. Their coat is slick and smooth and it is enough to protect it from the briars and burrs in a woody area, but not to thick for them to lodge themselves in it. There are usually two main colors, which are the orange and white, or the liver and white. The other colors are Liver tri-color, Black and white, and Black Tri-color. The AKC in the USA and Canada does not recognize the color black for the Brittany.

Their heavy eyebrow makes him look tired but nothing is farther from the truth. The intelligence of this dog shows in their face. Their nose is another great attribute of the Brittany with their sense of smell. The nose is more or less rounded and usually is black depending on the color of their coats. Their ears hang close to their head and have a slight fringe on the bottom of the fur. Their tails are usually docked to keep it less than 4 inches.

Brittanys are good-tempered dogs and they are great with children if they are raised with them from puppies. Some can be nervous or hyperactive. Some people have said they are so easy to train all you need to do is give them a stern look or a word and they listen fast! You can have other dogs for pets because they get along with many of them. They are very social and like working in-group settings. They are not a breed to buy if you want them for protection. They would walk up to a stranger and wag their tail before they would ever think of biting anyone. You can make them a housedog as long as you give them their daily runs for exercise. If they are kept inside too much and do not get to run, you may come home to a house that looks like a tornado went through it, because they will get back at you and destroy stuff. They suffer from separation anxiety so if you work during the day this is not the breed for you.

There are a few other traits that you may have to deal with that is common for Brittany. They get excited and are very happy to see you, which can cause them to dribble urine from being so anxious. They will also whine excessively if they are stressed. If you have a home life where there is a lot of yelling or screaming then the Brittany is not a good choice because they are sensitive to stress and will become very withdrawn if their family is having problems. This breed needs a calm and soothing environment.

The Brittany is a shedding dog so if you hate hair all over your house, then this breed is a no-no for a housedog or it can be kept outside. They should be brushed everyday and this will help keep the shedding under control.

Avoid giving to many baths as this dries out the skin. If their skin becomes dry then you will have a dog that does not quite a bit of scratching and will be uncomfortable. You want to keep their toenails clipped to prevent foot problems. Brushing their teeth is almost as important as brushing their coat. You should brush their teeth on a regular basis and give rawhide, nylon bones, and biscuits in between to ensure you keep tartar down to a minimum. Take doggie toothpaste, rub on briskly, and then wipe off with cheesecloth. If the tartar is too bad, you should take them to the vet and have it removed. Usually dry dog food and treats will prevent that trip to the vet.

The first Brittany in a show was in 1900. Once everyone found out how good the Brittanys were in the field their popularity grew. They started seeing more and more in the United States during the 1920s. Then the C.K.C. and the A.K.C. recognized the Brittany to their clubs in 1934. They are just referred to as Brittany in the United States and in Canada, they are known as the Brittany Spaniel. The Brittany of France are referred to small-setters being breed with Setters. Breeding the two makes their nose keener and that is the most useful tool on the dog for hunting. They say they resemble them all except for their small tails. Arthur Enaud was the man to bring the Brittany breed back since it was almost extinct. It is now one of the most sought after breeds for hunting.

With the help of man, the Brittany evolved into a distinctive breed by 1904.Senor Juan Pugibet was the man to bring the first Brittanys over to the United States. Then in 1933, Louis A. Thebaud started importing the Brittany to the United States. The breeding of the French Brittany to the American has proven exceptional to the final result. The French Brittany was bred more for close contact as for the American they would run ahead. The pointing standards of the French are more distinct than that of the American. Therefore, the end result would be to breed them together to come up with the ultimate hunting dog and they have done just that. The Brittany will stand, point, and when flushed will run, grab the bird and bring it right back. Then they are ready to go again. The Brittany will walk for a bit and suddenly you will see him take a stance and point, which is a sure sign he has found another one with his keen sense of smell. These have become one of the famous breeds to get if you are an avid bird hunter.