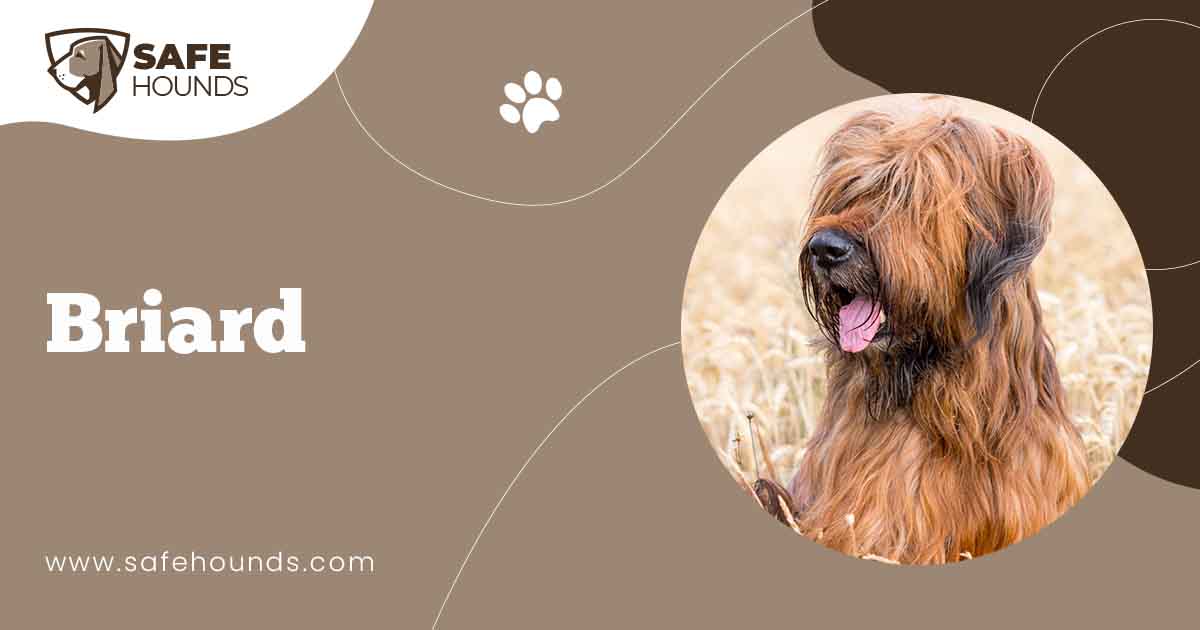 The Briard is a small working class dog. It was designed to protect herds of animals, and herd them up, as would a sheepdog.

In the beginning, the Briard was bred to work herding and guarding sheep, in addition to this task they were left alone to care for the sheep for months at a time without human interaction. This makes the Briard more versatile than the breeds that only herd or only guard. The size of the Briard has quite a bit to do with the job they were expected to perform. The smaller, agile, and swift Briards were mainly used for herding, while the larger, heavier, and stronger breeds were used mainly for guarding the sheep.

The most famous Briard to date is Buck, the dog from the 90s sitcom Married with Children. Others that are somewhat famous are Tramp (from the 60s sitcom My Three Sons), Jasper (from Bachelor Father), Agent K-13 Fang (from the 60s sitcom Get Smart, the inspiration for Inspector Gadget), Stinky (from the sitcom Dharma and Greg), Them (from the Addams Family cartoon that was the inspiration for the sitcom and movies), Reno (from the movie Top Dog), Rosie (from Dennis the Menace, Dennis pet throughout the movie), and Cho Cho (the main character of The Karate Dog).

The Briard is a large muscular herding dog with a coarse, long, slightly wavy double coat. Briards are generally black, gray, or tawny in solid color. The tawny puppy coat turns to a lighter yearling coat. Then the coat deepens in color again to a richer colored adult coat. The hair of an adult coat is six or more inches, giving the coat an attractive, bushy look. The Briard has a shaggy beard, eyebrows, and mustache.

The ears can be cropped or left natural and are usually clipped into a rounded shape so the hair falls back from them into the rest of the coat. The muzzle is square and long and the nose is black. The long tail has a crochet type hook at the tip. The Briards elegant gait is floating and agile, as if it never touches the ground.

Briards stand 22 to 27 inches at the withers. Ear cropping has been common in the breed, but more breeders are leaving the ears in their natural state since ear cropping is becoming illegal in most European countries.

The Briard is a medium sized, rugged, agile dog. It has a harsh coat and double dewclaws mounted low on each rear leg, resembling additional toes. Each double dewclaw should have bone substance and a nail, giving the appearance of a wider rear foot. Bred for centuries to herd, the additional toes on each rear foot give the Briard the ability of pivoting on one foot for quick turns, which are necessary for their work.

The Briard has retained a balance of size and build that is required for both herding and protection of their flocks. They are not too large grow tired during herding yet large enough to fend off predators.

The Briard is a very loyal and protective dog. It is normally called a heart wrapped in fur. Once they have bonded to their family, they will be very protective of it. They are a bit shy or very mistrustful of strangers.

Briards are very intelligent. They are quick to learn but are also quick to take advantage of any lack of determination on the part of the owner. Any uncertainties regarding rules of the home, and the dog now has full reign.

New introductions should be in the dogs time, including furniture or the addition of a new baby into the household. They require proof that the new intrusion is friendly. They must be taught that it is a good thing and not harmful to the dog or the family. They enjoy being reared with children.

Throughout the centuries, the Briard was bred to herd and to protect their flocks. This comes in handy when the dog is a house pet. To domesticated Briards, their family is their flock and all strangers may appear to be predators.

Letting them know that people in general are friendly and not harmful will help them establish a lifelong socialization pattern, which will result in an outgoing and happy dog. This socialization with people will in no way diminish their ability for protecting and guarding their family.

Briards are generally healthy, but some are prone to PRA, Cataracts, and Hip Dysplasia. They can experience bloat and stomach torsion. The condition can come on faster than with most dogs, and, if left untreated, can be fatal. They key to preventing intestinal issues is to feed them small meals twice a day.

The Briard were bred to be working dogs and will become restless if they are not exercised enough. They love to swim or run and make an excellent jogging companion.

Their long coat requires an extensive amount of grooming. The Briards coat is coarse and burly. Dirt and water have trouble clinging to it, and if well groomed it sheds very little. Expect the minimum time required for grooming to be about two hours per week and much longer if you have been remiss. The Briards coat can also become matted without regular attention. You should clean the inside of the ears often along with the removal of excessive hair between the pads of the feet and ears.

If cared for properly, the life span of a Briard is about 10-12 years.

Briards are reportedly dated back to the 8th Century with the Emperor Charlemagne, and in the 18th Century, Napoleon was also reputed to have Briards. Unfortunately, shepherds were not known for their writing skills, so little is available during this time on the history of the Briard. In fact, it is from the United States of America that some of the early documentation comes. In 1789, Thomas Jefferson became one of the first breeders in the USA. Jefferson was a man with an appreciation for the usefulness of dogs. He wrote, they are the finest house and farm dogs I have ever seen, speaking about the Briard.

In France in 1897, the first official standard governing the appearance of the Briard was created by Le Club Francaise du Chien de Berger. The work of the herding dogs is so specialized that the work demands specific qualities of the body, spirit, and attitude. These characteristics were defined in this early French Standard and its revisions in 1908, 1924, 1925.

The Briard was the official dog of the French Army. This explains why they are somewhat rare today. So many Briards were lost in World War I. The main use for the Briard was to carry supplies to the front lines and serve as a sentry dog. Due to its keen hearing, reputed to be the most acute hearing of any breed, it was used by the medical corps to search for wounded soldiers. The reports stress the amazing ability of the Briard to lead the corpsmen to soldiers, which still could be saved. It was said that any man a Briard passed by was beyond survival.

The Briard is not a breed created by purposeful crossbreeding, but rather is the natural descendant of mans first helper, the dog of pre-history. It has evolved through time by due to the qualities needed in his work.

Today the Briard is more elegant than he used to be. Devoted breeders have kept him less shaggy, just the right size, and have retained all of his original characteristics, especially his alertness and his tractable temperament.