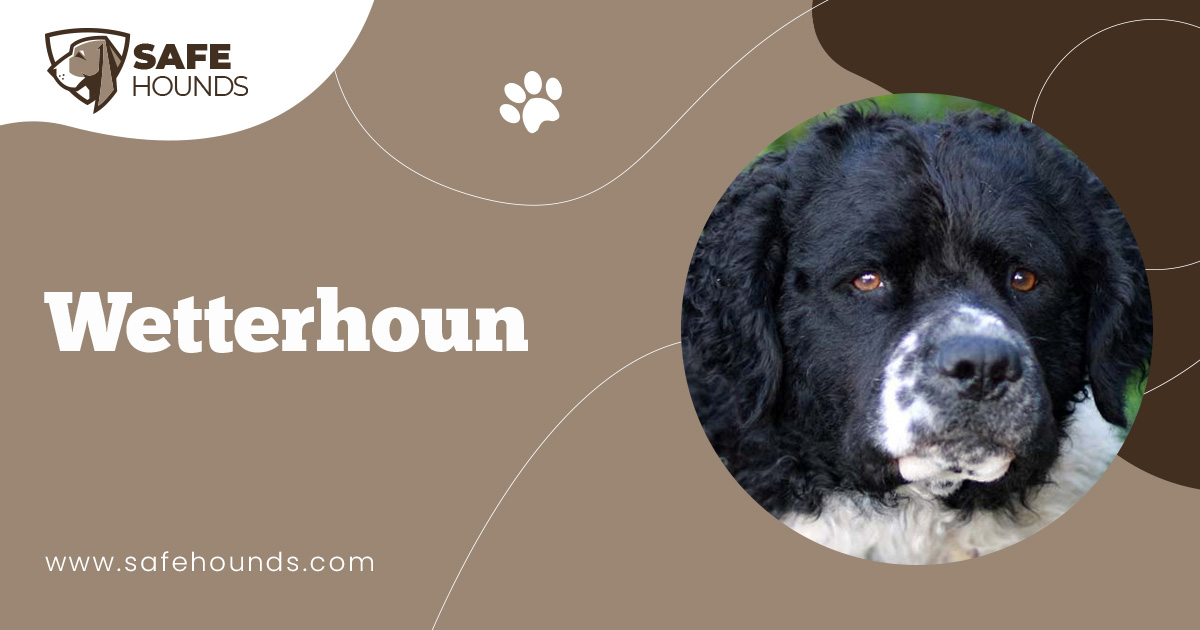 A cautious Frysk with a heart of gold this is the description given by the Dutch Wetterhoun Club to the breed of dog utilized to hunt small mammals and waterfowl in the lake district of its homeland. The Wetterhoun (pronounced as VETTERHOUN) was developed in Netherlands Friesland province. The name was derived from the West Frisian word wetterhoun which means water dog.

As with most breeds of dogs, the precise origin of the Wetterhoun is unknown. This breed is believed to have existed in Friesland for over 400 years. Historical data of the breeds development are non-existent but stories about the dogs part in the history of its homeland were handed down from generation to generation.

The Wetterhoun has a large head, a squarish body that is supported by fragile looking thin but very strong legs and a thick and coarse oily coat. This medium sized dog measures between 21 to 23 inches at the withers and weighs from 33 to 42 pounds. The tail that that curls into a semi puff ball and carried alongside the croup is a distinctive feature of this breed. Breed name means water dog. A Wetterhoun in fact loves the water and acclaimed for being an outstanding water retriever. But unlike other breeds of water dogs, the hocks of the Wetterhoun are closer to the ground and the large thickly padded feet are not webbed.

The breed is primarily kept as a yard dog. Friesian farmers depend on this breed to reduce moles and pole cat population from the farm buildings and from the fields. The dog may have a snarling and a rather grim expression. An uninformed may view the Wetterhoun to be a fierce breed. The dog is actually strong willed but good natured. Once loyalty and the affection are won the dog will be a gentle and lovable companion and a steadfast protector of the family.

A Wetterhoun is a sturdy and rugged breed. This breed though moves in a graceful and effortless manner. The strong and powerful head is large as compared to the size of the body. The slightly rounded skull gives the impression that it is broader than long. The skull and the muzzle though are of the same length. The stop is moderately defined. The powerful truncated muzzle slightly tapers to a well developed nose with well opened nostrils. Dogs with a black base coat color would have black noses. A brown nose is seen on a dog with brown base coat color. Medium sized and oval shaped, the eyes give the dog a rather grim expression because of the way they are set at a slightly slanting angle. Eyes that are not deep set or bulging have tight fitting eye lids. Similar to the color of the nose, eye color would also compliment the color of the coat. This breeds eye color ranges from brown to dark brown. Set on rather low, the moderately long and trowel shaped ears are not strongly developed so that they hang down the head without any break. A signature of a Wetterhoun is the curled and slightly long hair that covers the ears at set on and gets shorter as it progresses to the tip.

Strong round neck has no dewlap. Slightly arched, it merges into the topline in a blunt angle so that the head appears to be carried low. This breed has powerful somewhat square shaped body. The short back is straight, the loin strong and the croup slightly sloping. Seen from the front, the chest seems to be broader than deep so that the front legs appear to be wide apart. The rounded chest with its rounded ribs does not extend over the level of the elbows. The long tail is rolled and carried over the back or alongside the croup. Oily thick and curly hair that covers the entire body is shorter on the head and on the legs. Coat colors range from black and white, liver and white and solid liver or black.

The Wetterhoun is an outstanding hunter that has evolved into a wonderful home companion in later years. The breed is gaining a loyal following. However, this dog is not for everyone. The dog needs an assertive and firm owner. The dog has a will of its own and a weak owner will find it hard to gain the respect of the breed. The high level of intelligence should make training the dog easy. The dog though is rather stubborn and it would only respond to consistent and firm training methods. A Wetterhoun has a rather intimidating expression. The dog is often perceived as a ferocious and aggressive breed. A Wetterhoun is a good natured breed. It bonds strongly with the family and makes a wonderful companion and playmate of the children. The dog is wary of strangers and makes a dependable watchdog because it is very protective of its family and territory. A Wetterhoun has a dominant temperament. This breed is noted for its high prey instinct as well. Socialization that is best started early is necessary to make the dog accept other dogs and smaller pets.

A Wetterhoun has very minimal grooming requirements. This is an all purpose dog with an all weather coat. Occasional brushing would maintain the good condition of the coat and remove dirt embedded on the curly hair. Bathing should be done only when very necessary. Frequent bathing will strip off the natural oils that moisturize the skin and maintain the gloss of the coat. Stripping the oils will result to dry skin that could lead to skin problems. The Wetterhoun is a retriever. The ears must be cleaned and checked for infection regularly. The dog can endure any type of weather because of its all weather coat but it would not do too well in apartments or in a home in the city. A Wetterhoun would need a large area to get the sufficient amount of exercise, otherwise the dog can develop destructive habits.

Friesland, the county in the northern section of Netherlands is home to the Friesian cattle and the Friesian horse. People in this province noted for the presence of numerous windmills have their own customs and have developed the unique West Friesian dialect. The Frisians have developed their own native dogs as well. The Wetterhoun is one of the two breeds of native dogs developed in this remote county. Also known as Otterhoun, Dutch Water Spaniel and Dutch Spaniel, this medium sized dog was primarily developed to hunt otters and polecats. These fearless dogs were originally utilized to hunt fitch (mustela putorius), polecats and wild cats seemingly unaffected by the feral animals bites. Wetterhouns though are more valued for being otter specialists given that otters are fishermens rivals for fish. After the otter population was managed, the dogs were used to hunt other animals. With a high prey drive and with a water repellent coat, the Wetterhouns have evolved into an outstanding retrievers of both fur and feather.

The Wetterhouns exact origin has been the subject of arguments of historians and cynologists. The breed is speculated to have existed in Friesland earlier than the 19th century. It was believed that the Wetterhoun was developed in the 1600s from gypsy dogs, from Old Water Dog and from water spaniel type and spitz type native Frisian farm dogs. The now extinct Old Water Dog has contributed to the development of a number of present day spaniel type dogs.

The Wetterhoun is a rare breed, relatively unknown outside its country of origin. The World War 11 years have almost caused the extinction of the breed. 0through the concerted efforts of breed fanciers led by Jan Bos, the Wetterhoun was preserved. A loose standard was set and dogs that conformed to the specifications were registered. Owners of dogs that fit the specified image were urged to bring their dogs to the Leeuwarden town for inspection and for testing to measure the hunting and the retrieving Abilities. Selected specimens were listed into a Dutch Pedigree registers appendix. These testing were continued until the early part of the 1960s when the appendix was finally closed. The dogs registered in the appendix became the foundation stock for the purebred Wetterhoun.

To promote the breed, members of the Wetterhoun breed club made efforts to highlight the regional development of the breed by participating in Rotterdam and Amsterdam dog shows in their traditional Frisian costumes complete with Friesian horse drawn carriages. These efforts that made the headline in the countrys major newspapers earned the breed worldwide recognition. The breed was recognized by the United Kennel Club and by the FCI and by a number of other minor registries. The breed that was formerly seen only in Friesland is now seen in other parts of the Netherlands and in other countries as well although the Wetterhoun remains to be a rare breed.