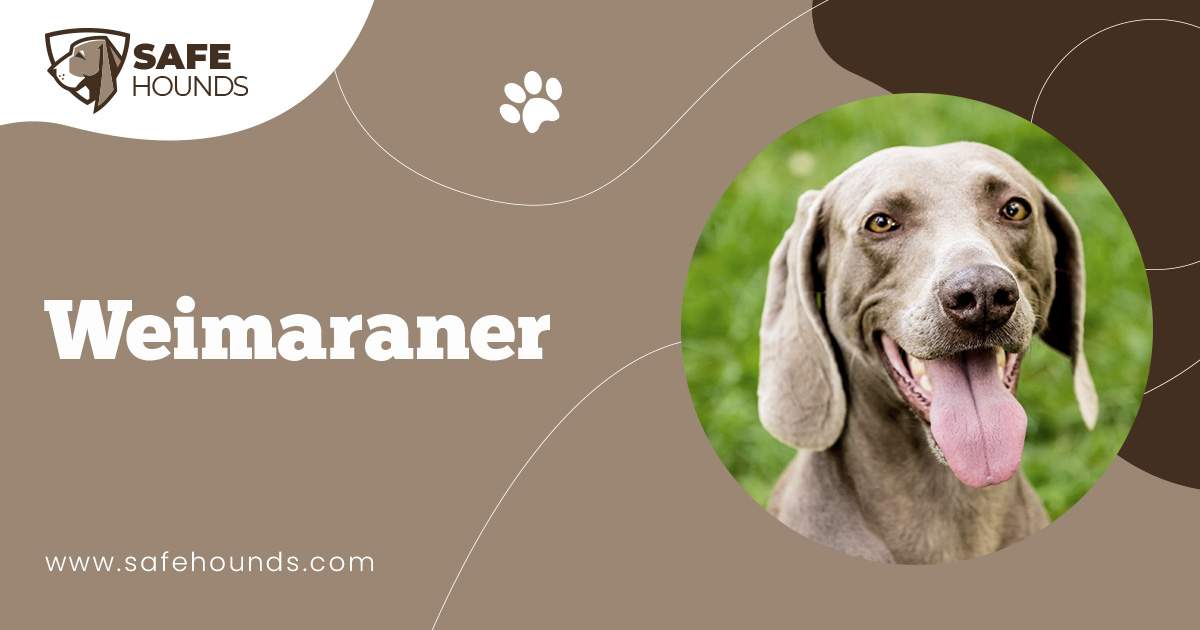 The Weimaraner is a beautiful silver-grey distinctive looking breed of dog that was originally developed and is still used extensively for hunting in all parts of the world. The name, Weimaraner, was derived from the Grand Duke of Weimar Karl August who was a huge fan of the breed and who also spent much of his time hunting. Because of the fact that so many of the breeds traits were bred into it for hunting, it is a dog that is not as ideal for a house pet, as other dogs can be, unless it has undergone a measurable degree of training.

For instance, while it is bred to be a loyal and devoted dog that bonds tightly with its owner and its owners family, which it will view as its pack, in turn it has a tendency to experience mild to extreme bouts of separation anxiety when left alone by its owner, even for brief periods of time. This in turn can lead to destructive behavior such as chewing on furniture, so it definitely not a dog that does well indoors other than on a temporary basis.

However, the Weimaraner is known for its high level of intelligence as well as for its innate reasoning ability, which does make it a dog that can be well trained if its owner is willing to put in the time it takes to do so. The Weimaraner is also a very playful dog that seemingly never runs out of energy and no walk, jog or game of fetch is too far or too long for it.

Unlike other breeds of hunting dogs such as Labradors and Golden Retrievers that can to some degree be docile towards strangers and other animals. The Weimaraner has a tendency to be aggressive towards strangers if it hasnt undergone a conditioning process while it was young. However, for someone that has the space and is willing to devote the required time to it, they will be rewarded with a good all purpose dog for companionship, protection and play that is truly a devoted family member.

It is the Weimaraners distinctive coat, color and unique eyes that make it stand out from all other breeds and that also lend to it a true look of distinction. The hair on its coat is very short and ideally solid grey in color, although it can range from blue to black and it can have a small patch of white on its chest. There is a variety of long haired Weimaraner however, but while it is recognized by kennel clubs around the globe it is not yet recognized by the American Kennel Club.

Its eyes will be amber to grey with piercing pupils that are impossible not to notice. The Weimaraner is a large breed of dog, with the males ideally standing between 25-27 inches in height and females measuring in between 23-25 inches tall. They are also a well proportioned large chested animal with males weighing in between 70-85 pounds and females tipping the scale between 55-70 pounds ideally.

Its tail is also usually docked to one third of its original size. Where ever the Weimaraner is devoid of hair such as its lips and inside of its ears, which are medium sized and hang loosely on its cheeks and jowls, its skin color should be pink. Because it is a very active and energetic breed the Weimaraner is slightly muscular yet lean and fit even in its later years. Overall the Weimaraner is a well proportioned trim athletic looking animal that is truly a pleasure to behold.

The Weimaraner is truly one of the best hunting dogs ever bred and its temperament and personality speaks to that in its entirety. It was bred to function well in a pack and hence does not do as well alone. It bonds completely with its owner and the family that it is surrounded by and repays them in kind with complete devotion.

It is high strung and will need room to run and play as well as a yard full of stimulus to guard. The breed is very playful and can get into mischief when bored and left to their own devices. The Weimaraner will also need some level of training as their high level of intelligence demands it. A well trained and disciplined Weimaraner is truly a joy to own, but one that is not can in fact be the exact opposite.

The Weimaraner has a tight short thick haired coat that really needs little more than an occasional brushing if you are going to be bringing it into the home for extended periods. As far as other care regarding the Weimaraner is concerned goes however, it is mostly centered around its temperament and basic needs as a hunting dog.

It needs toys to chew on at its ready and plenty of room to run around as well as occasional outings. Because the Weimaraner is an active breed it is wise to keep its toe nails clipped, because they can become long and troublesome if it is getting its exercise time on grass or sand. Also, because it is an easily bored and intelligent breed, care should be taken to insure that the fence around its yard is secure and escape proof.

The Weimaraners modern breeding standards were developed in the 1800s, but the fact is that a number of dog breeds resembling the Weimaraner such as the Vizsla loosely trace their origins one thousand years back to Europe. Researchers believe that it is possible that the Mastiff and a type of Continental pointing dog, that came in several variations in medieval Europe, are most likely the Weimaraners ancestors.

It was the nobility in those times that were engaged in the breeding of the Weimaraners as well as other breeds of hunting dogs, due to the fact that they were the ones that had the means and the space to do so. The Weimaraner was obviously bred to be an all around rural family dog that was and still is competent in serving multiple duties in the sportsmans family and home life.

Over the course of history, events such as wars, plagues and times of civil as well as political unrest have interrupted the ongoing breeding process of quite a number of European dog breeds, so there are blank spots that are filled in with speculation with regards to tracing the exact history of many European hunting dogs that have lineages that stretch as far back as the Weimaraners.

It wasnt until the 1950s that Weimaraners were finally brought to the U.S from Germany. This was due to the fact that prior to that time German breeders were highly possessive of them. Since its arrival in the U.S. and Britain the Weimaraner has gained a well earned reputation as a premium hunting dog that functions well as a pointer as well as a retriever. While it can seem to be slower in the field than other hunting breeds, the fact is that the Weimaraner, due to its high level of intelligence is a far more thorough and efficient hunter.

In its beginnings, in medieval Europe, the Weimaraner as well as most other breeds of large hunting dogs were originally used for hunting large game such as deer and wild pig in packs. Over the course of time they were used more and more for the small game duty that they mostly serve today. However, wild pig hunting is still popular in many areas of the U.S. to this day and the Weimaraner is still more than content to blissfully pursue wild pig as part of a pack on the trail of a fleeing animal.

Since its introduction to the U.S. and its subsequent surge in popularity some bad matches were made by inexperienced breeders which has led to some unfortunate results. Since that time however, common sense has prevailed and as its popularity has waned knowledgeable responsible breeders of the Weimaraner have been working to right any wrongs that were done during that brief time period in the Weimaraners modern history.