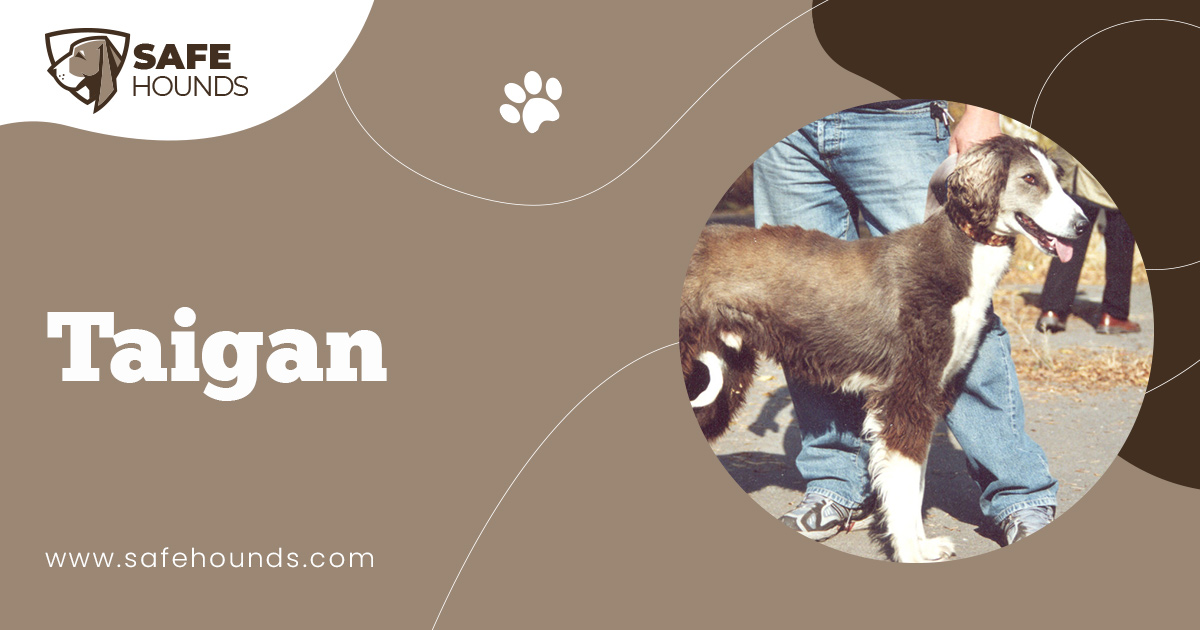 Undying inextinguishable imperishable! This what kyrgyz means. In the heart of Asia, in Kyrgyztan, a breed of very strong and cross country runner exists. The Kyrgyz Sighthound commonly known as Taigan is a dog breed that has adapted well to work in steppes and in mountains that stretch along the Kyrgyz-China border. This admirable breed of sight hound is considered as the living legend of the Tian Shan Mountains.

For centuries, the Taigan remained the loyal and indispensable helpers of the Kyrgyz people. The Kyrgyz people are predominantly nomadic cattle herders that migrated through a very wide route in Siberia and Central Asia. The breed is believed to have developed from various breed of eastern borzoi type dogs but tracing the precise origin of the breed is impossible. What was established was the fact that these dogs have been very important to the existence of these nomadic people. Cattle are the main source of livelihood of these nomadic tribes. Hunting is done as a supplement. The Kyrgyz people traditionally keep two breeds of dogs – one is for hunting and the other is for guarding and herding the flock. A family that keeps one or two Taigans would never go hungry. These sight hounds hunt mountain goats (Capra Ibex) foxes, badgers, marmots, hares, wolves, wild cats and various hoofed animals. The meats provide the people with additional nourishment while the pelt are either sold or bartered to procure essentials like spices, grains and cloth that are not produced by the natives.

A Taigan is a sighthound but the dog uses all its senses when hunting. This hunting dog uses its scenting and hearing ability as well. This breed has an edge over other hunting breeds that are accustomed to hunting in flat country. This breed has no trouble with mountainous terrain. Admirers of this breed would tell how the dog would run with the blood gushing from its ears. This single minded hunter that runs very swiftly will be oblivious of the injury caused by its back paws to its ears when it runs. The Taigan is an unsurpassed cross country runner. Hunting with eagles is still a popular hunting method in Kyrgystan. The Taigan is hunted in tandem with these birds. This breed is aptly named Kara-Kush which means black bird as it would glide fleetly unhampered by obstacles, has a leaping movement reminiscent of a Persian gazelle and can turn at full speed without missing a beat. Highly valued, these dogs are never sold as they are only presented as gifts to friends and relatives.

The Taigan is an averaged sized breed. Height of dog varies from 65 to 70 cm and bitches measure from 60 to 65 cm. This breed has an elastic skin and a thick soft coat that grows an undercoat in the winter. A Taigans coat has a rather unique distribution. Short fur covers the muzzle area, the front of the head, and the front of the forelegs from the hocks to the pads of the hind legs. Similar hair length covers the back and the waist. Long wavy fur about 7 cm in length covers the backside of the skull, the neck and shoulders as well as the forearms and back of forelegs. The ears are covered with rather off standing 5 to 8 cm soft wavy hair. These well developed burkas (hair covering the ears) protects the ears from being injured by the hind legs. The thighs and the shins are covered with well developed hair. Relatively hard hair on the feet serves as shoes that protect the dog from being injured when hunting on rocky terrain. Coat colors range from black, grey, brown, white and yellow. A black coat with white markings is most common.

This breed has a massive skull and a wedge shaped head. Stop is not very pronounced. The big wide nose is always black regardless of coat color. Large oval shaped eyes with slanting eyelids are brown or hazel in color. Thin hanging ears are rounded at the tips and set on level with the eyes. Strong white teeth meet in a scissor bite. A Taigan is a muscular dog with a strong though not heavy skeletal system. The straight long neck is narrower at the sides. Shoulders are well formed. The broad back may be straight or slightly arched. Wide oval shaped chest has short but well developed ribs. A Taigan has a sword shaped thin tail that forms a ring at the tip. Jointed base vertebras of the ring do not allow the tail to be completely unrolled.

The Taigan is a highly energetic and persistent hunter. Who would believe that when not hunting, this breed is quiet and would exhibit a dignified demeanor. This breed is very loyal and would manifest an undying devotion to its owner but unlike other breeds, this hunter will never be fawning. The dog would not tolerate rough handling. The dog knows its value and would consider itself at par with the owner not lower in rank but a dependable friend and companion. On a hunt, the dog makes its own decisions. This hunter hunts to kill. A Taigan is noted to be leery and mistrustful of strangers but it is not uncommon for the dog to choose a stranger it would befriend. This breed is an aggressive hunter but it shows a calm temperament around other dogs.

A Taigan has a beautiful coat that needs to be regularly brushed to remove dead hair and to prevent the formation of tangles that would mar the beautiful appearance of the coat. This dog loves freedom. Freedom is imprinted in the dogs character. This energetic hunter is accustomed to running around the camp and hunting for its own food. It would never do to confine the dog in a home in the city where the primal instinct to run and to walk will be curbed.

The Taigan is believed to have descended from the mythical bird dog. Legend has it that an egg was stolen from the nest of the mountain vulture Kumai. A puppy was hatched from the egg and became the legendary savior of the tribe by dispatching packs of wolves that attack herds of cattle. The dog was highly valued as it has saved the entire tribe from starvation. Because of this feat, Taigan which means catch up and kill was given to the breed. The Taigan is a very energetic breed. This sighthound is an extremely fast runner. In Kyrgyz language, tai can refer to a very playful and restless year and a half colt. Gan is for blood. Thus Taigan which means romping blood is a very apt name for the breed.

The Taigan originated form Kyrgystan. This sighthound has existed with the nomadic tribes that migrated through the different parts of Central Asia and Siberia. The remote mountain countries, the snow capped mountains, the plateaus with the grazing herds of cattle has been the home of the dogs for hundreds of years. The Taigan is one of the ancient swift dogs of Central Asia. The extremely strong and hardy breed was made stronger and hardier by the harsh terrain of Kyrgyzia. The cross country capabilities of this breed were honed in the 2000 to 3000 meters altitude of its mountainous homeland. This extremely fast dog has excellent sight and scenting abilities as well. The dog is highly depended on by the nomadic tribes as aside from providing food, the Taigan is one of the breeds with the capability to reduce wolf population. This dog became the loyal and dependable companions of the nomadic cattle keepers. These dogs are treasured by the Kyrgyz. It was the custom of these people to keep dogs out of their collapsible houses. But a bitch with puppies will be given her own space inside the yurta. Other breeds of dogs called dog by these nomads but not this highly valued sighthound. This hunter is lovingly called Taiga by its owners.

This breed was once on the brink of extinction. The transformation of nomads to settled life cause the decline of the breed. Nomads no longer need to hunt for food. A lot of these dogs became strays. Breed population was further reduced by campaigns to kill stray dogs. Efforts to preserve the dogs were started by some breed enthusiasts. Registration of existing specimens was started in 1930s by Soviet cynologists. Registration was stopped during the German invasion in 1941. In 1964, the first breed standard was laid down by USSR. Kyrgyztan gained independence in 1991. With the collapse of collective farming, people returned to the nomadic life. Taigans were again fully utilized. Interest for the breed was revived more so when the upper class in urban areas discovered the outstanding qualities of the breed. Taigan population is growing year by year. The Taigan  the legacy of the nomadic ancestors was saved from extinction, widely recognized in its country of origin and was honored by being a national treasure of the country.