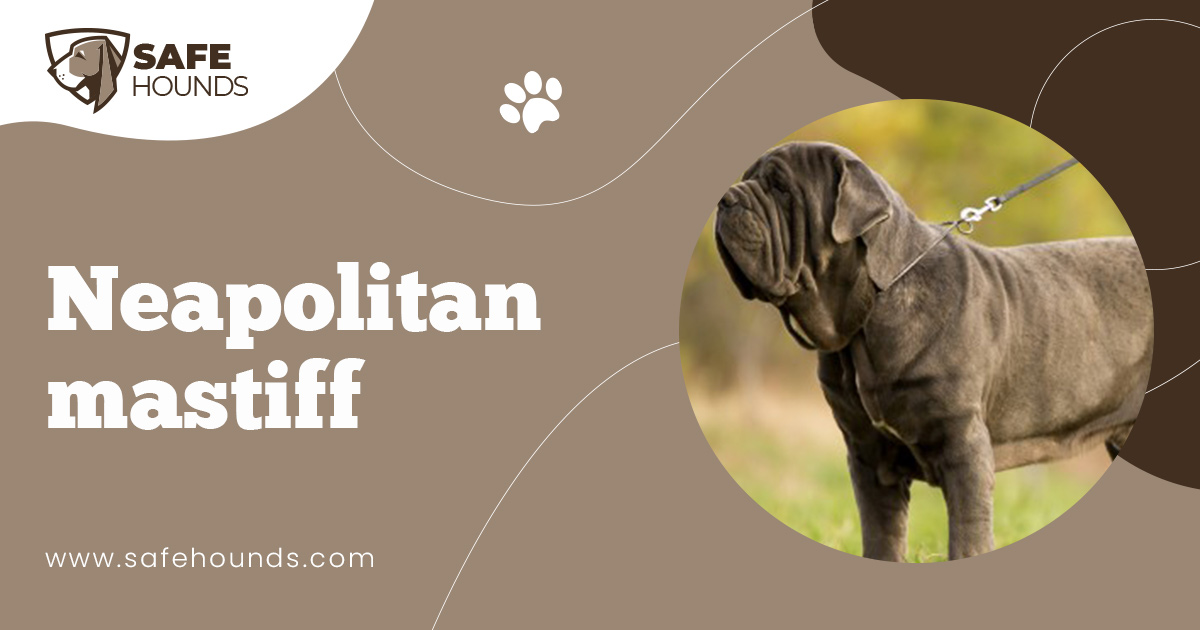 The Neapolitan Mastiff is a large dog also called Mastino Napoletano, Mastino, and Italian Mastiff. His most popular nickname is Neo. He is recognizable by his drooping jaws, hanging wrinkles, and hanging fold on his head.

This breed has ancestors back to the war dogs that were used by the Romans and even back as far as to the giant Molossus of Alexander. Originally, from Italy, there were developed to guard the home while surprising and astounding the onlooker. The Neapolitan Mastiff does just this with his large size and wrinkled face. Just one glance at this huge dog, most intruders will turn around and be gone in seconds.

Some famous Neapolitan Mastiffs include Alan from the movie Babe: Pig in the City, Fang from the Harry Potter movies, Pansy from the Andrew Vachss Burke novels, and Sweetie from Robert K. Tanenbaums Butch Karp novels.

The coat on the Neapolitan Mastiff is short, dense, and is the same length across the body. The hair is straight and is never longer than one inch without any type of fringe. The coat color can be blue gray, black, tawny, mahogany, and lighter or darker shades of each of these colors. You may even see some brindling, which is tan in color unless the coat color is brindle. You may notice white areas on the chest, from the chin to the chest, the underside of the body, backs of the pasterns, toes, and the penis sheath.

The head of the Neapolitan Mastiff has heavy wrinkles and folds. He has a penetrating start with deep-set eyes than are practically hidden beneath the upper lids that fold over his eyes. If you can see his eyes they will an amber or brown according to the coat color. The eye rims will be the same coat as the coat.

The ears of the Neapolitan Mastiff are set above the cheekbones. In most cases, the ears are cropped to an equilateral triangle, but this is not mandatory. The nose is the same color as the coat with large open nostrils.

Even though he looks rough and vicious, he is not this way with his family. He is a sweet and loyal dog that is affectionate to members of his family. They are serious, calm, and quiet unless they need to be otherwise. The males tend to be a bit more aggressive than the females and even domineering. However, both male and female are good with children, as long the children do not tease them.

They are great guard dogs and are very wary of strangers. In order for this breed to blend well with the family, they must be socialized at a young age with a calm handler. The Neapolitan Mastiff must know his master is in control.

Male Neapolitan Mastiffs do not get along with other dogs.

Apartment life is okay for the Neapolitan Mastiff as long as he receives adequate exercise. He can also do well outside in most climates as long as enough bedding to stay warm. He will need a soft dry area in which to rest and in warm weather, he will need lots of shade and water.

The Neapolitan Mastiff during puppyhood should not be allowed to over play as he can become too tired. Rough housing should also be avoided while he is young. Once the breed is an adult, he will need quite a bit more exercise such as long walks.

The coat is short and does not need much from regular brushing, however, the wrinkles on his face should be cleaned often. The Neapolitan Mastiff does have a tendency to drool, which is another reason to clean him after eating.

The Neapolitan Mastiff is a descendant of the Tibetan Mastiff, which is the most ancient member of the canine species. This breed is also believed to be a direct descendant of the Molossus, the war dogs of the Middle East. These dogs were often used in the Roman arenas fighting against lions, bears, and gladiators to the death for the entertainment of the Roman population. Since they were war dogs, they fought beside the Roman soldiers.

Since these dogs traveled with soldiers throughout Europe soon there were a variety of Mastiffs all across Europe.

It is believed the mastiff breed was brought to Britain by the Phoenicians around 500 BC and thus the beginning of the breed. The breed did become extinct and only survived in Campania.

The breed was rediscovered in the 1940s near Naples, Italy. The Neapolitan Mastiff was not recognized until 1946 and received its standard in 1949.

In Italy, the Neapolitan Mastiff has been used by police, army, farmers, business owners, estate owners, and of course anyone that wish to protect their property. The breed is very popular in Italy however, it is very rare in the United States.