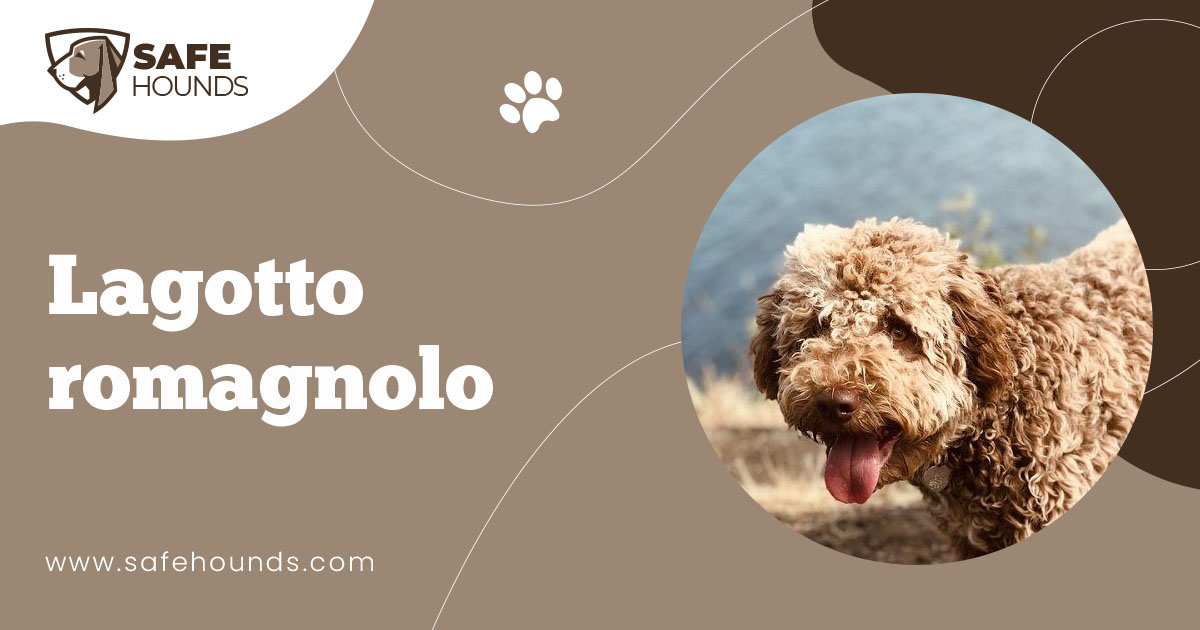 Water dog from Romagna is the meaning of Lagotto Romagnolo. The name was taken from the Italian word lago which means lake for the reason that this gun dog is an exceptional water retriever. Lagotto in the Venetian and Romagnan dialect means duck dog. Peasants used this dog in hunting waterfowl in the vast marshlands of Romagna. The thick waterproof coat enables this hardy little dog to stay immersed in icy cold water for hours. Thick hair covers the inside flap of the dogs. This prevents water from entering the ears when the dog is diving to retrieve ducks. A Lagotto Romagnolo is an excellent swimmer because the dog has webbed feet.

Lagotto Romagnolo is a well proportioned medium size dog with a well muscled body and a dense wooly curly coat. The curly thick coat makes the dog look like a poodle. Poodles are considered to be ladys pets as they are most commonly seen in the company of women. The Lagotto Romagnolo though has a well muscled robust body. In spite of the attractive curly coat, male owners will not be ashamed to be seen walking a Lagotto Romagnolo as the dog is obviously a working breed. Similar to a poodle, the dog sheds very little. It would even seem that the dog does not shed at all. Actually dead hair is tangled in the dense fur. This kind of fur is termed as hypoallergenic

The Lagotto Romagnolo has earned the nickname Truffle Dog. In Italy, a truffle is a much prized underground tuber. These fungi have a strong aroma that is used by the Italians to flavor rice dishes and pasta sauces. Because of the dogs keen sense of smell it can locate the much valued edible fungi. This is the only breed used for truffle searching. The size of the dog makes it easily search low bushes and the thick coat serves as protection against brambles and thorny shrubs.

Lagotti are working dogs. This breed would be happiest if given a task to do. They have an exceptional talent for searching. The dogs hunting instinct was removed. Unlike other dogs that would be distracted with the sight or scent of other animals or prey, this dog seems to have a one track mind that enables them to concentrate on the work at hand. These are highly intelligent dogs that would need to be given constant mental stimulation. Aside from searching for truffles other brain activities would be searching for people and playing hide and seek with the children.

Lagotto Romagnolo is a hardy breed and one that has no genetic defects. The dog is expected to live for 15 to 17 years.

Lagotto Romagnolo is stout well muscled dog with a balanced proportion. The moderately big head that has a trapezoidal form is supported by lean, muscular and slightly arched neck. Nose has wide and open nostrils. Nose color depends on the coat and ranges from light to dark brown. Lagotti have strong jaws and white teeth that meet in a scissor bite. Big round eyes color would range from dark hazel to dark brown. Eye color would depend on the color of the coat. The prominent eyelashes and the dark pigmented eyelids give the dog an alert, intelligent and lively look. Triangular ears with rounded tips hang when the dog is at rest and would be slightly raised when the dog is alert. Ears are well covered with wavy hair.

The Lagotto Romagnolo has a compact, robust body. The back is very muscular. Chest is strong and reaches to the level of the elbows. The tail that is set at mid height tapers to a point and is well covered with wooly hair. At rest the tail would be in a scimitar position and distinctly raised when the dog is alert. Tail is raised in line with the back never curled or ring shaped when the dog is at work.

A Lagotto Romagnolos wooly coat is thick and curly though it does not form into thin cords. The outer coat that is rough and the thick soft under undercoat are both water repellent. Outer coat that forms into ring shaped thick tight curls covers the entire body though the hair that covers the head have more open curls. The cheeks are profusely covered with curly hair. Abundant hair forms whiskers, beard and eyebrows. Coat color would range from solid white, off-white, white with orange or brown spots, black and white, grey and varying shades of brown. Some dogs have brown or dark brown masks.

Lagotto Romagnolo is most valued by Italian peasants who hunt the vast marshlands. This breed is a working breed and Lagotti are most happy to be given a task to do. The dog excels in retrieving because the coat enables them to stay in the cold water for a considerable time. This is a very affectionate dog that would form a strong loyalty to its master. This makes a Lagotto easy to train. But as with all other breeds of dogs, training must be started from day one. This is to ensure that the puppy would develop into a sensible and well mannered dog.

Aside from being exceptional water retrievers and truffle searching dogs, the Lagotti is also a most valued home companion. For centuries, these dogs were kept by peasant marshmen in Italy to serve as guard dogs. These are not yappy dogs and when they bark it is to warn the owners of intruders. Having a Lagotto Romanolo in your landing is just like having a security guard. You can be assured that no intruder can gain access to your home. It is believed that this dog sleeps with one eye open. Its acute sense of hearing makes it an excellent guard dog. A Lagotto would get along well with other dogs and with smaller pets too if properly socialized.

The coat makes this breed a cuddly canine. People love Lagotto and obviously the dog love people too. This is one breed that needs human companionship. This breed has an innate affinity with children. This dog is known to be friendly to all but they seem to favor children more. Puppies are especially exuberant and lively. These qualities make the dog a most suitable playmate. A hide and seek game with the kids will provide the needed mental stimulation for the dog. Exercise and mental stimulation is most certainly needed so that the dog will not be bored. A bored dog would find things to occupy them and more often than not these activities are destructive. A Lagotto loves to dig and for its rather diminutive size, the dog can dig big holes in a short time. You may need to protect your prized plants with a fence. These dogs love to swim, even in a rain puddle. Be ready for a muddy dog as the dog loves mud too.

Apartment living will do fine as the dog is rather small. Some are even known to be couch potatoes. The Lagotto though are energetic working dogs and they would need plenty of exercise. This is a dog for an active owner who would take the dog walking 3 to 4 times a day.

The tight curls that densely cover the body would need regular care. Coat care would really depend on the owner. Some would only need to regularly brush the curls to remove dirt while others would completely trim the coat two to three times a year to maintain a 1 to 1.5 inch length. This dog would need to be bathed more often as the tight curls have the tendency to catch dirt easily.

Hairs inside the ears have to be gently plucked regularly. This is to prevent infection that can arise from dirt and earwax build up.

Lagotto Romagnolo is a small rural dog that has existed in Romagna, the vast marshland in north eastern Italy. The dog is believed to have existed as early as 16th century in the Comacchio lowlands and Ravenna marshlands. This dog was specifically used as retrievers by waterfowl hunters. Because of the dogs coat that makes it withstand the icy cold water for hours, the Lagotto has excelled as retrievers for centuries. The dog was also used as an efficient guard dog that protects the family and the properties. Towards the end of the 19th century, the function the dog was known for changed. The vast marshlands were drained causing the disappearance of large flocks of waterfowls. The Lagotto Romagnolo finds another function, that of searching for the expensive truffle. The dogs excellent sense of smell enables it to find the much prized underground tuber. In the 1920s the dog was so well known all over Italy. In spite of this fact, no initiative was taken to establish the Lagotto Romagnolo as a pure breed. Thanks to Quintino Toschi, Dr. Antonio Morsiani, Prof. Francesco Ballota and Lodovico Babini, the Lagotto was established as a recognized breed. In 1995 the breed was recognized by the FCI. The Lagotto Romagnolos population is rapidly increasing and the dog is enjoying enormous popularity in different countries if the world.