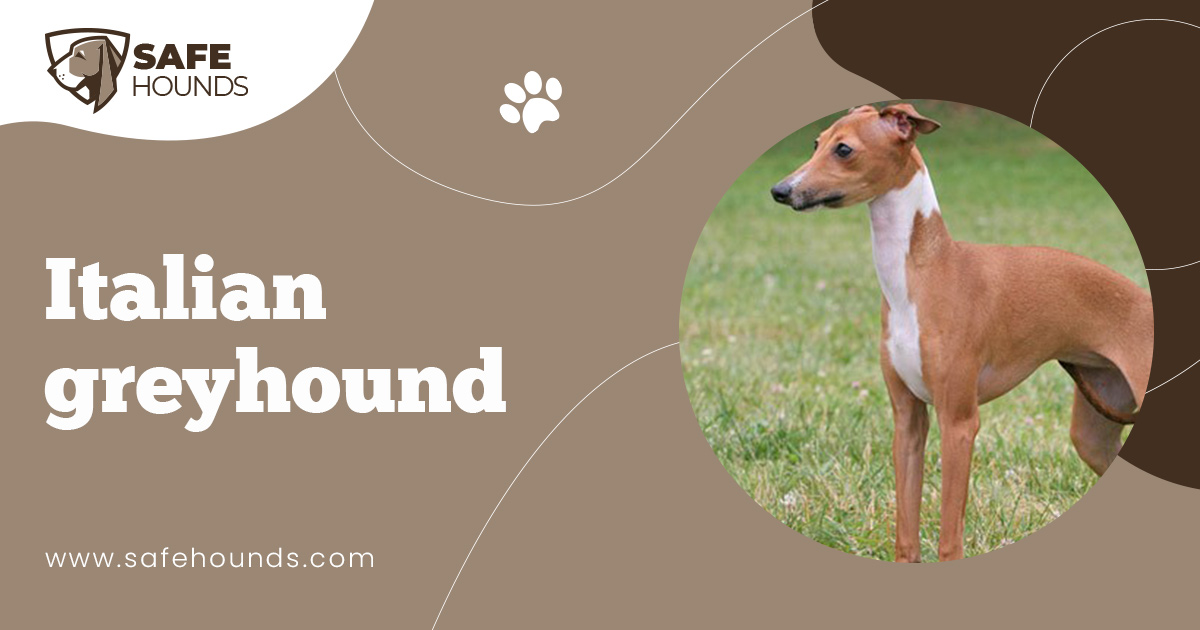 Italian greyhounds are the toy breed of dogs, which are very old. A dog, which shared many similarities with the Italian Greyhound, was found in an Egyptian tomb that was 6000 years old. They have been found in various ancient cities such as Pompeii and other Roman remains. 16th century paintings depict the Italian Greyhound as pets in Europe.

The Italian greyhound is an elegant, miniature breed of Greyhound dogs. It has fine bone structure and a sleek body. The head is long and tapers to a pointed muzzle. With dark eyes, thin lips, and dark nose, it looks like its larger cousins. It has a sleek, short coat, which is easy to maintain. The coat varies in colors of slate gray, red, cream, blue and black with markings of white on the ears and body.

They are gentle dogs and easily trained with careful handling. They are affectionate and very submissive with undying loyalty towards the owner. However, they tend to be reserved with strangers. This is a breed of quiet dogs who prefer homes where there are no active children though they get along fine with all age groups.

They are good with well-behaved children, but are naughty dogs themselves and can run with great speed. They need to be monitored as pups as they are very active dogs that like to jump around when young. They get along fine with similar sized dogs and cats, but find it difficult to adjust to larger dogs. They have a life span of 12 to 15 years and are a hardy breed of pet toy dogs.

Italian Greyhounds stand between 12 to 15 inches and weigh about 6 to 10 pounds. They come in two varieties one below 8 pounds and one over 8 pounds. They are a miniature version of the larger Greyhounds. The head is narrow and long, which tapers to a long pointed muzzle. The nose is dark brown or black and maybe according to the color of the coat.

Its teeth are strong and meet in a scissor bite. The eyes are dark and it has an intelligent look in its eyes. It has small ears, which have a very fine texture and are laid back. The neck is long and slender with an arc and long sloping shoulders.

It has similar looks like its cousin, the Greyhound, with a deep brisket, tucked in abdomen, and an arched back. The tail is slender, straight with a slight curve at the end that reaches the hocks and is set low. It has a sleek short coat with glossy satin hair and has colors of slate gray, red, cream, black, fawn, and blue. It has white markings on the body, ears, and feet.

The chest is narrow and deep with forelegs that are straight, fine boned, and set well under the shoulders. Hindquarters are also long, muscled thighs, and hocks are well let down. It has feet similar to that of a rabbit, with well-arched toes. Dewclaws are removed early. Its gait is free and high stepped, front and hind legs move in a coordinated straight line.

Italian Greyhounds are very affectionate, submissive dogs and are very loyal towards its owners, but are shy with strangers. They have a very naughty and playful nature, but are intelligent dogs, which can be trained easily. They need careful handling as they are high strung and timid.

They get along well with smaller sized pets and other Italian Greyhounds at home, but have difficulty adjusting to larger dogs. It is the ideal pet for a quiet household with no active children, but can adjust to apartment life with well-behaved children. They need supervising, as they are highly active dogs when young.

They are a very easy breed to keep as they require very little grooming. To keep the coat shiny, smooth, and gleaming, it is important to rub down their coat with a towel. Bathing is important and needed regularly. After a bath, they need to be completely dried and warmed, as they are sensitive to temperature changes.

The teeth should be brushed regularly for clearing built up tartar. The occasional grooming that is needed is trimming the toenails. The Italian Greyhound sheds very little hair. Dewclaws are removed early after birth. They also need emotional security, which can be provided by patting. They are easily scared and frightened which may lead to snapping at people, thus the reason to be around well-behaved children.

The Latin inscription of beware of the dog was actually meant as a reminder to people as not to step on the small hound, the early ancestor of Italian Greyhound. These dogs have been quite popular since the days of Cleopatra, who bestowed Italian Greyhounds upon Julius Caesar when he conquered Egypt in 48 BC.

European nobility were also fond of this breed with its delicate looks, soft demure and because of its popularity in Italy. It came to be known as the Italian Greyhound during the 17th century.

Fredrick the Great of Prussia carried his pet, an Italian greyhound, to all his military campaigns. There are stories of an African chieftain who was willing to exchange 200 cattle for a single Italian greyhound in the early 19th century.

The Italian greyhound is a hunting dog and has a strong instinct for hunting and chasing prey. It is the smallest of the hounds of the gazehounds – dogs that hunt by sight. It was originally bred as a companion dog, which could also hunt game and fowl. They came to England in 1860 at the Birmingham Dog Show. The AKC registered this breed in 1886.