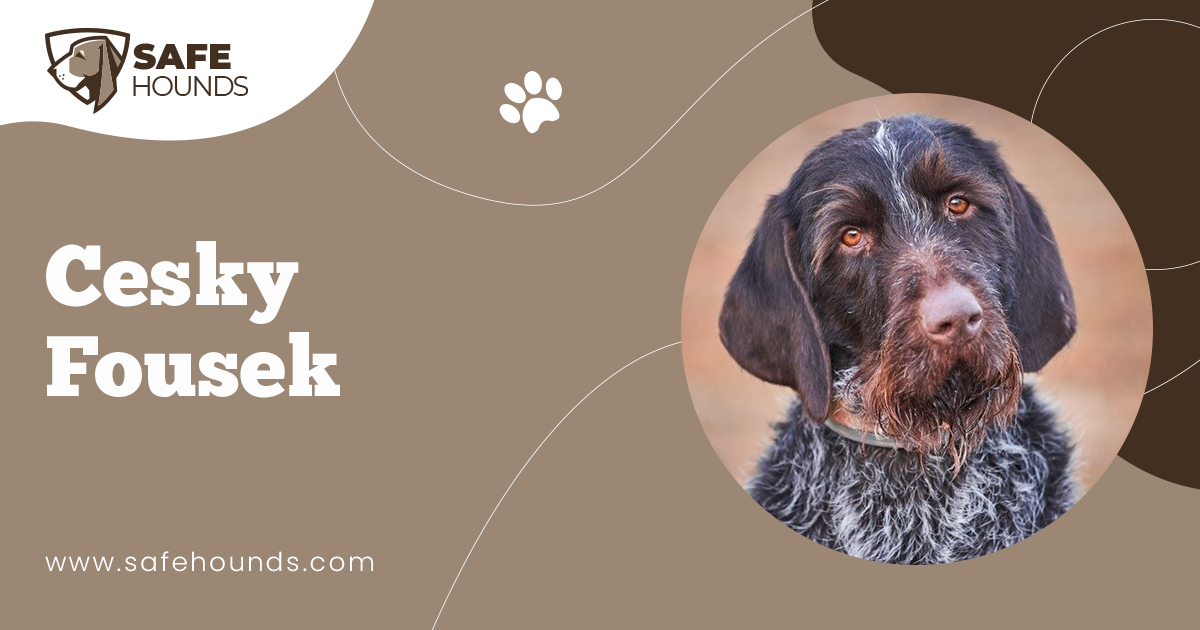 Cesky Fousek a breed that belongs to the family of wire-haired gundogs originated in Bohemia, a country that forms part of the Czech Republic. The Cesky in the name of the breed was actually for Czech and Fousek for flowing beard. This is a handsome breed made distinct by its coloring and the facial furnishings. A Cesky Fousek has a beard and a moustache. Female dogs are called Ceska Fouska and males are affectionately called CF by its owners.

A Cesky Fousek is a multi purpose gundog that is most valued not only in its country of origin but also in other European countries. This is a versatile dog that is equally adept in the field, in the forest and on water. A Cesky Fousek is primarily a gundog that excels in pointing, hunting and retrieving. This is an enthusiastic hunter, one that has the stamina to cover large tracts of land and the tenacity to tirelessly search for a bird in any type of terrain.

A Cesky Fousek was primarily bred to work and a CF will really work! These dogs have an inherent hunting ability but a hunter could not ask for a more capable hunting companion with a properly trained CF. Apart from being highly intelligent these dogs possess the inherent canine eagerness to please. This makes training a Cesky Fousek very easy.

A Cesky Fousek working the field is truly a fantastic sight. With its keen sense of smell the dog would unerringly go to the direction where the prey is situated be it on water or under the cover of thick vegetation. The Cesky Fousak is one excellent duck hunter but its prowess to hunt big game like wild boars can not be doubted.

The Cesky Fousek also known as the Bohemian Wire-haired Pointing Griffon is considered to be the second most commonly used hunting dog in the Czech and Slovakian Republics. Valued for its outstanding hunting abilities, the dog is also known to be an excellent guard dog and a most affectionate home companion. This working dog that is treasured in its country of origin is gaining popularity in other parts of the world.

To an untutored eye the Cesky Fousek is often mistaken as its cousins the Drahthaar and the Stichelhaar. This is due to the fact that all three breeds are wire coated and almost the same in size. The Cesky Fousek is a medium sized dog with an elegant and noble appearance. The dog has a long lean and narrow head with a slightly domed skull. The muzzle moderately narrows down to a broad dark brown nose with well opened nostrils. Deep set almond shaped eyes can be dark amber to deep chestnut in color. Close fitting eyelids are grey-black in color. The eyes may have a gentle expression but they also denote the dogs shrewd and intelligent character. Set on high ears are broad and lies closely to the head reaching the cheeks. The dogs jaws are strong and well muscled. Teeth meet in a scissor bite.

The dog has a short but firm back that gradually slopes from the withers to the croup. The front view of the dog will show a lyre shaped chest. The chest is deep reaching to the level of the elbows. The dog has well proportioned oval shaped rib cage and a moderately tucked up belly. The dogs tail may be docked by 3/5 of its natural length and carried rather upwards horizontally.

A Cesky Fousek has three types of coats, a rough and straight guard hair that grows approximately 5 to 7 cm long, a close fitting 3 to 4 cm top coat that is rough and coarse and an undercoat that is very soft and dense. This weatherproof undercoat is shed in summer. The forehead, the head and the cheeks are covered with short hair. Longer and softer hair that covers the lips and the lower jaw forms a beard. Hair on the dog eyebrows grow upwards. Ears have short soft and smoother hair. Coat colors can be brown or dark roan. Some dogs with dark roan coats have brown patches and brown coated dogs can have ticked marking on the lower part of the limbs and on the forechest.

As mentioned Cesky Fousek is an excellent hunter that enjoys working in the field, in the forest or in the water. However, the dog derives the same kind of pleasure if it is with the family. This is a people oriented dog, a cheerful and friendly one that takes much pleasure in being with the entire family. The dog loves all the members of the family but is known to favor whoever is carrying the Frisbee, the hunting gun or the car keys. Really a very astute dog! This breed is full of love for the human family, very gentle and loving with the children and loyal to the masters. This is one of the breeds that will suffer from separation anxiety if left alone for quite a long period of time. The dog can be destructive if this happens.

A Cesky gets along well with other dogs. They can tolerate other smaller pets if raised with them from puppyhood. This dog though has a strong prey drive and an excellent scenting ability. If the dog is allowed to wander off leash, it can be a menace to the smaller pets of the neighbors.

Being a working dog a Cesky Fousek would need to be given sufficient opportunity to exercise. This dog would not do in an apartment or in a small household. For this breed, an athletic family living in a home with a large securely fenced yard would be the ideal living environment. These dogs are escape artist, therefore a fence is necessary.

A Cesky Fousek is a low maintenance dog. The dog is a moderate shedder. Brushing the short coat regularly with a firm bristle brush is sufficient to maintain its good condition. A chamois cloth rubbed on the coat would make the coat gleam. These dogs should only be bathed when necessary so as not to remove the natural oils that make the coat weatherproof.

Make sure that the ears and the feet are thoroughly examined and cleaned after every hunting session. This breed tends to get cold easily. The coat must be properly dried.

Written standards for the Cesky Fousek breed was established in the 19th century although it is believed that this is an ancient breed that have existed in the Kingdom of Bohemia (presently the Czech Republic) during the Middle Ages. This dog that was then called Bohemian Water dog existed during the reign of Charles IV (1316-1378), the Bohemian King and Emperor of the Roman Empire. A letter written by Vilem Zajic, the educator of the young emperor was found in Castle Karlstejn archives. The letter verified the fact that hunting dogs called Canis Bohemicus existed in 1348. The dogs were given by Emperor Charles IV as gifts to Markgraaf Ludwig von Brandenburg. Other documents pertaining to the existence of swift, tenacious and enduring hunting dogs were found. These dogs are very easy to train and known for their outstanding ability to hunt. This breed gained enormous popularity not only in Bohemia but also in other European countries. As there were no other wire haired hunting dogs during those times it was assumed that the Canis Bohemicus which was later on named Cesky Fousek was used in the development of other European wire-haired pointers.

The breed almost became extinct after the 1st World War. Only a few dogs remained. Reviving the breed became a challenge as the dogs were scattered all over Czechoslovac Republic. In 1924 the Association for the Wirehaired Pointer Cesky Fousek was organized with the prime goal of reviving the breed. In 1931 the breed standard was drawn up.

Through the efforts of the association dogs that match the requirement of the standard were found. In 1958, other wirehaired pointers were introduced to the Cesky Fousek. This strengthened the hunting abilities of the breed. A standard for the breed was drawn and officially approved by FCI in 1958.

Presently, the Cesky Fousek is considered to be the second most sought after breed of hunting dog in the Czech and Slovakian Republic. This breed is gaining popularity in other countries of the world.