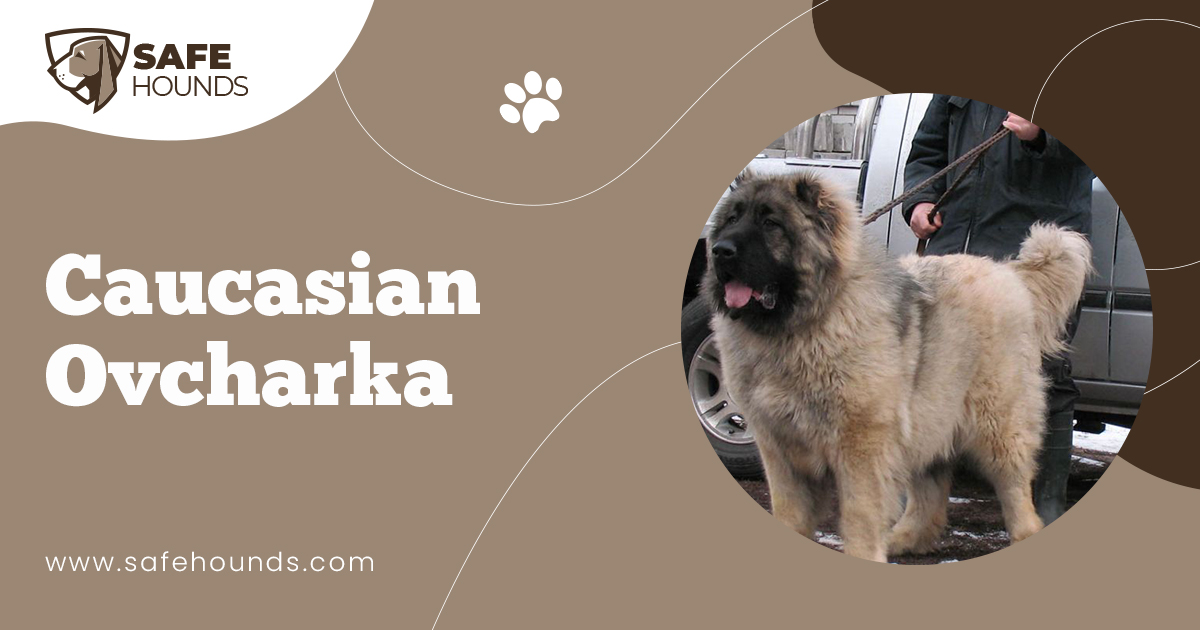 The Caucasian Shepherd Dog, otherwise known as the Caucasian Ovcharka, is a popular breed in Russia, Georgia, Armenian, Azerbaijan, and other countries where flocks and properties are protected by shepherds. The Caucasian Ovcharka is a large dog with a strong musculature and massive backbone. The male Ovcharka is larger and more massive than the females. They have larger and heavier heads, with a more expressed mane. The Caucasian Ovtcharka has ears that are quite furry for insulation and also dark eyes that are deep set. The tail of the Ovtcharka is covered extensively with heavy hair. Their forelimbs are straight and long, with a dense bone mass. Their paws are quite large, with hair between the toes. This helps provide the breed with good insulation and protection. The nose of the Ovtcharka is black and quite prominent, with large nostrils. The thick dense coat of the Caucasian Ovcharka is weather resistant and is very effective at keeping out the cold. Adult coats are coarser than the coats of puppies. The color of the Ovtcharka varies from fawn, pied, tan, gray, white, and brindle. The Caucasian Ovtcharkas ears are usually cropped short in its native country.

A Caucasian Mountain dog that is considered well bred is a healthy, muscular, strong boned, and even tempered animal. Overly vicious temperaments or excessive softness are considered to be serious faults for this breed. The Caucasian Ovcharka is usually a healthy breed that lives for a relatively long time. As is the case with large breed dogs, certain negative health conditions are common. Some of these include hip dysplasia, occasional heart problems, and obesity. The ears of the Ovcharka are traditionally cropped. However, some modern dogs are no longer altered in this manner. There are many different colors and coat types of the Ovcharka. The preference for show dogs are grey dogs with long coats. Some white markings are allowed. There are black and black and tan dogs but they are not acceptable as show dogs. The minimum height for the Caucasian Ovcharka is 24.5 inches and there is no maximum height. It can certainly be said that the Ovcharka is not a breed that just anyone could handle or anyone would want. This breed requires careful and responsible handling. For the inexperienced dog owner, this can be a very challenging dog to own. They are very self-willed, extremely strong, and very intelligent.

Normally, the Caucasian Ovcharka is courageous, strong willed, and assertive. Originally, this dog was bred to protect livestock. Without proper training and socialization, this breed may demonstrate ferocious behavior and tendencies that soon become unmanageable.

The Caucasian Ovcharka has a tendency to distrust people it does not know and it has a natural and very powerful urge to defend. The Ovcharka is alert, hardy, strong, and brave. It is not recommended this dog be left alone with children. If play becomes too rough, this breed may revert back to its natural urge to protect and it will do so quite profusely.

The Caucasus mountain range in Eastern Europe is home to the Caucasian Mountain dog. Technically, the term Caucasian dog should refer to a group of breeds and not a single breed or a preferred variant found in a particular breed. Depending on their home region, there is a wide variety among the various Caucasian dogs. The term Ovcharka is popular in the West, primarily because of the Russian Kennel Club. The word Ovcharka translates to sheep dog, shepherd dog, or shepherd. The Caucasian Ovcharka is considered a Russian breed and is a part of the Troika. The Troika is a threesome of officially recognized Russian sheep dogs. The other two that make up the Troika are the bearded south Russian sheep dog and the central Asian Shepherd dog.

One of the earliest cradles of civilization was the Armenian Plateau. The first appearance of this breed is closely linked to that area. The Armenian Gamprs are considered to be a variant of the Caucasian Ovcharka. The Gampr comes in two separate varieties. Both of these varieties are believed to be older than the modern Caucasian dog. Some people even believe the Caucasian Ovcharka is the result of crossing the mountain Gamprs with the spitz type dogs in ancient times but others do not hold to that theory.

As can be seen, there is quite a bit of confusion concerning the Caucasian Ovcharka. Most of the confusion has been blamed on the Soviet era. They were well known for re-writing and even removing the histories of various regions under its rule. Russians were introduced to the Caucasian Ovcharka in 1859. This does go against the claim that these ancient dogs are an indigenous Russian breed. It is possible the Turks could also lay claim on the breed. At the very least, this is a reasonable argument because the Turks ruled a lot of the same areas before the Soviets did and they were known to use dogs as guardians for their camps and forts, going all the way back to the 1700s.

In Russia and other areas that were part of the former Soviet Union, the Caucasian Ovcharka is commonly shown at dog shows. Even though its original use as a sheep guardian is declining in areas such as Hungary and Poland, there are extensive breeding programs that have helped to ensure this breed remains popular. In the late 1960s, the Ovcharka arrived in East Germany to serve as border patrol dogs. In 1989, the Wall came down and these patrol dogs, then 7000 strong, were disbanded. Many of these dogs were adopted by German families in various areas of the country. Safeguards in the breeding process in Germany have helped to protect the future of this breed. As time goes by, it is likely breeders will breed out some of the negative characteristics of the Caucasian Ovcharka.