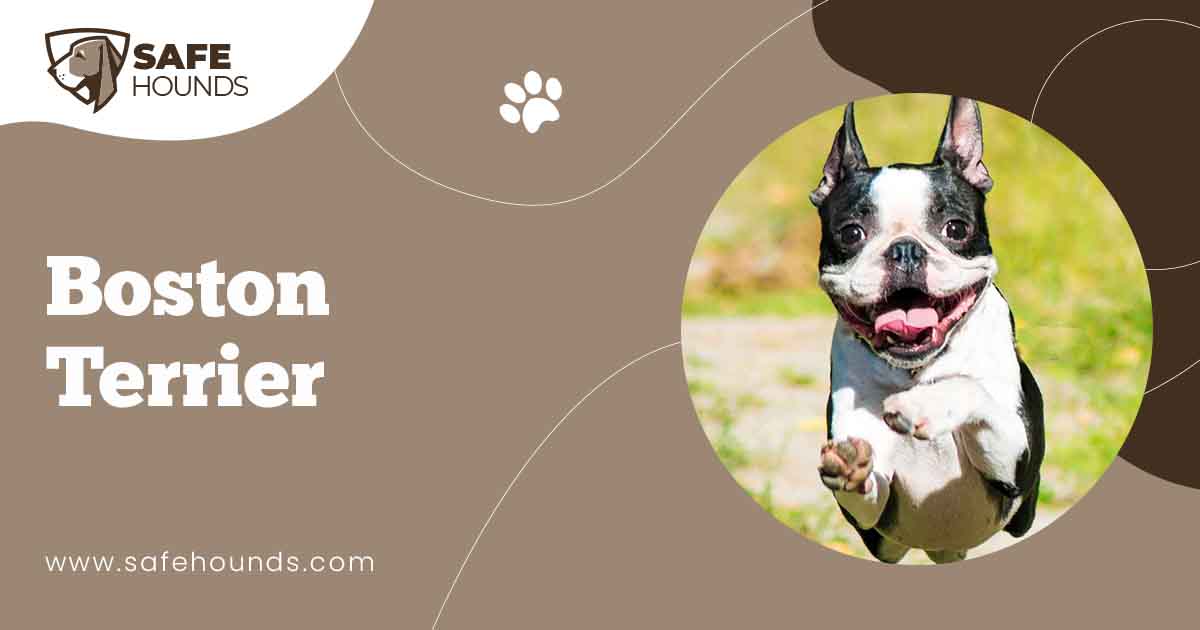 The Boston Terrier, also called the Boston Bull, is a member of Terrier family of dog. It originated in the United States. Obvious from the name, it was developed in Boston, Massachusetts. It is a lively, highly intelligent, smooth coated, short-headed, compactly built, short-tailed, well-balanced dog.

Boston Terriers are unfortunately not even considered Terriers by the American Kennel Club, but are part of the non-sporting group.

Sergeant Stubby, a Pit Bull-Boston Terrier cross, was a war dog of World War I, renowned as an American hero, and the only dog to be promoted to sergeant through combat. Stubby also served as one of Georgetown Universitys earliest mascots, where he is the supposed creator of the half-time show at football games.

The Boston Terrier is a small, strong dog. Its face is unmistakable with a short, wide muzzle, large round eyes of dark color, set far apart, and small, fine, erect ears. It has a wide, flat head that does not have wrinkles and a short, square muzzle leading to a rather large black nose. Boston Terriers typically have a face that is shaped almost like a square.

Its neck is slightly curved and its chest is broad. The Boston Terrier has straight and muscular legs. Boston terriers can weigh from 10 to 25 pounds, typically right in the middle. Boston Terriers usually stand 15-17 inches tall at the withers. Comparing the two genders, the only evident difference is a slight refinement in the females conformation.

The Boston Terrier has a very soft coat. It is characteristically white on the underbelly and either black, brindle, seal, or a combination of the three on its back. Seal is a color specifically used to describe Boston Terriers. It is defined as a black color with red highlights when viewed in the sun or bright light. If all other qualities are identical, brindle is the preferred color according to most breed standards. Due to the Boston Terriers markings resembling certain kinds of formal wear, along with its refined and pleasant personality, the breed is sometimes referred to as the American Gentleman. The Boston Terrier is known for its mild, attentive, and clever expression.

Frequently, variations of the breed standard are seen depending on the ancestry of the individual canine. At times, the English Bulldog, American Pit Bull Terrier, English Mastiff, Staffordshire Bull Terrier, and French Bulldog, among other breeds, have been crossbred with Boston Terriers to minimize inbreeding in what is considered a small gene pool.

While originally bred as fighting dogs, they were later down bred as more of a companion. Todays Boston Terrier is gentle, alert, expressive, and well-mannered. Many of the Boston Terriers seen today still have the spunky attitude of the classic terrier. Boston Terriers generally bark only when necessary.

Having been bred as a companion, they enjoy being around people. If properly socialized, they get along well with children, the elderly, other canines, and non-canine pets. Boston Terriers can enjoy cuddling, but others are more independent.

The Boston Terrier is enthusiastic and occasionally rambunctious. It has a sense of humor. A Boston Terrier is very sensitive to the tone of ones voice. This canine likes to learn and therefore is not difficult to train. The strong intelligence a Boston Terrier has ensures it picks things up quickly. At times, though, it can be somewhat willful.

Several health issues plague in the Boston Terrier: Cataracts, Cherry Eye, Luxating Patellas, Deafness, Heart Murmur, Allergies, and Curvature of the back, called Roaching. Roaching is most likely caused by patella problems with the rear legs, which in turn causes the dog to lean forward onto the forelegs. Due to the Bostons prominent eyes, some are prone to ulcers or minor injuries to their cornea.

Due to the shortened muzzle, many Boston Terriers cannot tolerate excessive heat and also extremely cold weather. Therefore, a Boston Terrier should avoid hot or cold weather, especially combined with demanding exercise, because that combination can bring harm to it.

The Boston Terrier, like other short-snouted breeds have an elongated palate. When excited, they are likely to reverse sneeze. During a reverse sneeze the dog will quickly and seemingly laboriously, gasp and snort. This can happen when debris or fluid is trapped under the palate, which irritates the throat or limits breathing. Reverse sneezing episodes will not hurt the dog. However, it does tend to scare the dog, as well as the owners. The fastest and easiest way to stop reverse sneezing is to gently rub the throat to induce swallowing while talking to them calmly. Otherwise, the reverse sneezing will usually resolve itself. They do have the tendency to snore or snort since they have a short snout. Because of their short snouts, they do tend to snort and snore. These can be signs of serious health issues. Some badly bred Boston Terriers may have a bone defect in the skull that stunts brain growth, causing retardations.

Regular walks or free play in a fenced-in yard is very important for the Boston Terrier to stay in shape. It is not much for long walks but does like to go everywhere its owner goes. The Boston Terrier is fairly light weight and can easily be carried.

The Boston Terrier originated around 1870, when Robert C. Hooper of Boston purchased a dog known as Hoopers Judge, a cross between an English Bulldog and a now extinct English White Terrier. Judge weighed over 30 pounds, which is much heavier than the Boston Terrier. Judge was then bred down in size with a smaller female. One of his male pups was bred with yet a smaller female. Their offspring crossbred with French Bulldogs, which provided the foundation for the Boston Terrier. The Boston Terrier originally weighed up to 44 pounds before they kept getting down bred. Their weight classifications were once divided into lightweight, middleweight, and heavyweight.

In 1893, the American Kennel Club (AKC) admitted the Boston Terrier and gave the club membership status, making it the first American developed breed to be recognized. The Boston Terrier is one of the smaller breeds of dogs that originated in the US that are recognized by the AKC.

The Boston Terrier was the first non-sporting dog bred in the US. In the early years, the color and markings were not considered very important, but by the early 20th Century the breeds distinctive markings and color were written into the standard, becoming an essential feature, and distinguishing different types of Boston Terrier. Even if it has been accepted into the AKC, they are not considered Terriers. If a classification is demanded, they are classified under Miscellaneous. In 1979, the Massachusetts state legislature named the Boston Terrier the state dog.