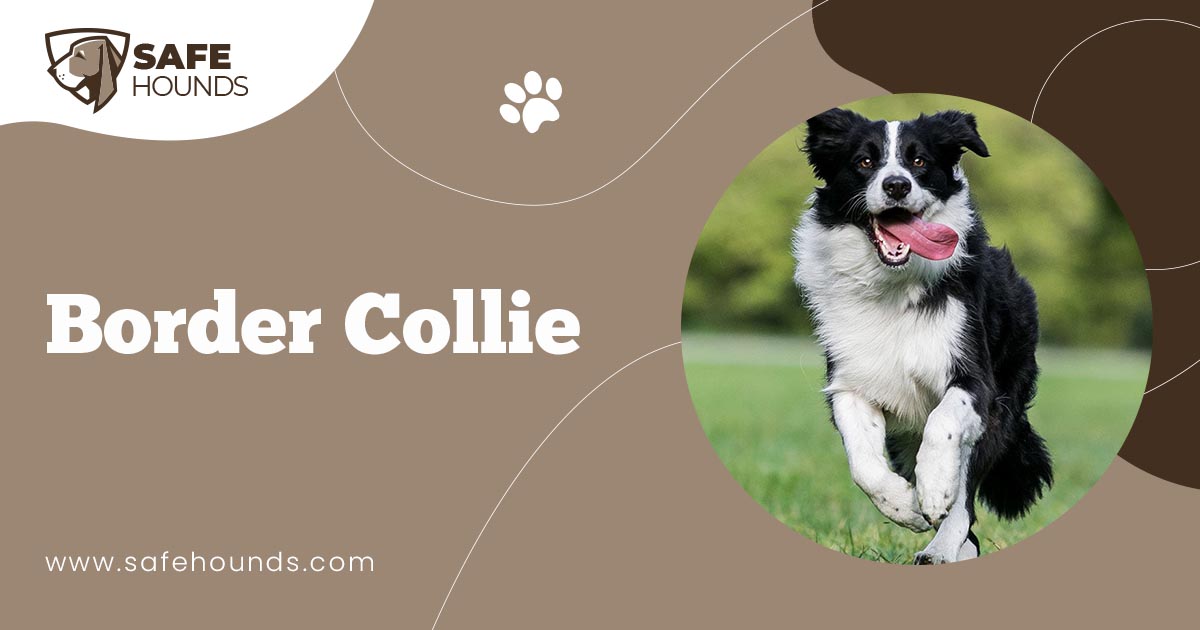 The Border Collie is a hardworking breed of working dog used for herding. It originated in England and Scotland. They are thought of as the most intelligent dog breed in the world. It is a medium-sized dog with athletic appearance. It displays style and agility combined with soundness and strength. Its keen, alert expression is a very important characteristic of the breed.

They are very energetic and have a tendency to be very destructive if not kept occupied. They are used on farms all over as sheep dogs for herding and care of animals. They are currently also used as pets and sport dogs.

The Border Collie has developed a very unique style of gathering and herding animals. It uses a sweeping motion to gather them all in one area and then uses a stare combined with a stalking type of movement to get them to move where it wants them to move.

The Border Collie is an attractive canine with an athletic appearance. Its hard, muscular body conveys the impression of effortless movement. The height at the withers varies from 19 to 22 inches for males, and 18 to 21 inches for females. The body, from prosternum to the end point of the rear, is slightly longer than the height at the withers. The Border Collie has bones that are strong but light.

The Border Collie exhibits an expression of intelligence, alertness, eagerness, and interest. Eyes are set well apart, moderate in size, oval in shape. The eyes are primarily brown, but sometimes lighter colors. Ears are medium in size, set well apart, one or both carried somewhat erect. The head is relatively flat and moderate in width. The head and muzzle are approximately equal in length. The top of the head is parallel with the top of the muzzle from a side view. Nose color tends to match the primary body color.

The neck of the Border Collie is of proportional length to the body, strong and muscular. It is slightly arched and blends smoothly into its strong shoulders. Its back is level from behind the withers to the slightly arched, muscular loins, falling to a gently sloping croup. The tail hangs low and is moderately long with the bone reaching at least to the hock. The tail carriage is normally low when the dog is concentrating on a given task and may have a slight upward swirl at the end like a shepherds crook. In excitement, it may be raised proudly and waved like a banner.

There are two varieties of coats of Border Collies. Both have close-fitting, dense, weather resistant double coats with the top coat either straight or wavy and coarser in texture than the undercoat. The undercoat is soft, short, and dense. The rough variety of hair is medium in length without being excessive. The Border Collie appears in all colors or combination of colors and markings.

The Border Collie is energetic, intelligent, keen, alert, and responsive. It is affectionate towards its owner and dogs it has bonded with, but may be sensibly reserved, almost alarmed, towards strangers. When approached, it is alert and interested, never showing fear, dullness, or resentment. A Border Collie is not vicious or aggressive. If it is, there is a larger problem that must be addressed.

The Border Collie is a very hard worker. It understands that when herding, that is a job that needs to be done, and takes it very seriously.

The Border Collie has a very happy, energetic demeanor. The tail is often the body part that shows off a confident personality easier. If the tail is wagging excessively, that is a sign of extreme happiness or confidence.

There are many diseases that plague the Border Collie. Some include Hip Dysplasia, Collie Eye Anomaly, Epilepsy, Elbow Dysplasia or Osteochondritis, deafness, Hypothyroidism, and in rare cases, Neuronal Ceroid Lipofuscinosis. These must be detected quickly and treated immediately.

It is very important for a Border Collie to have a large amount of exercise. It is a naturally energetic, playful dog that requires much attention and much exercise.

It is important to allow the Border Collie socialization in order to combat both dominance and shyness. Both are issues that need to be addressed as routine care to avoid a problem later on.

The Border Collie is a direct descendent from droving and gathering breeds originating on the Scottish and English border. The Collie or Colley type first appeared toward the end of the 19th Century. Every current Border Collie traces back to a dog that was known as Old Hemp. Old Hemp, a tri-color dog, was born September 1893 and died May 1901, just past the age of seven. He was bred by Adam Telfer from Roy, a black and tan male, and Meg, a black-coated, strong-eyed female. Old Hemp was a quiet, powerful dog that sheep responded to easily. Many shepherds used him as a stud for their females for breeding purposes because of his good genetic makeup. When a canine has such genetics, it makes him a good prospect as a stud for breeding purposes. Old Hemps working style became the Border Collie style.

The Border Collie Wiston Cap is the dog that the International Sheep Dog Society (ISDS) badge portrays in the characteristic Border Collie herding pose. He was the most popular stud dog in the history of the breed, for excellent genetic traits, and appears in a huge percentage of pedigrees today. Bred by W. S. Hetherington, trained, and handled by John Richardson, Wiston Cap was a good-natured dog. His bloodlines all trace back to the early registered dogs of the studbook.

These dogs were primarily known just as collies, but terms like working collie, old-fashioned collie, and farm collie have also been applied to them. It was in 1915 that James Reid, Secretary of the ISDS in England, first used the term Border Collie to distinguish them from those that were registered by the ISDS from the Kennel Clubs Collie, which originally came from the same working stock but had developed a different, standardized appearance following its introduction to the show ring in 1860.