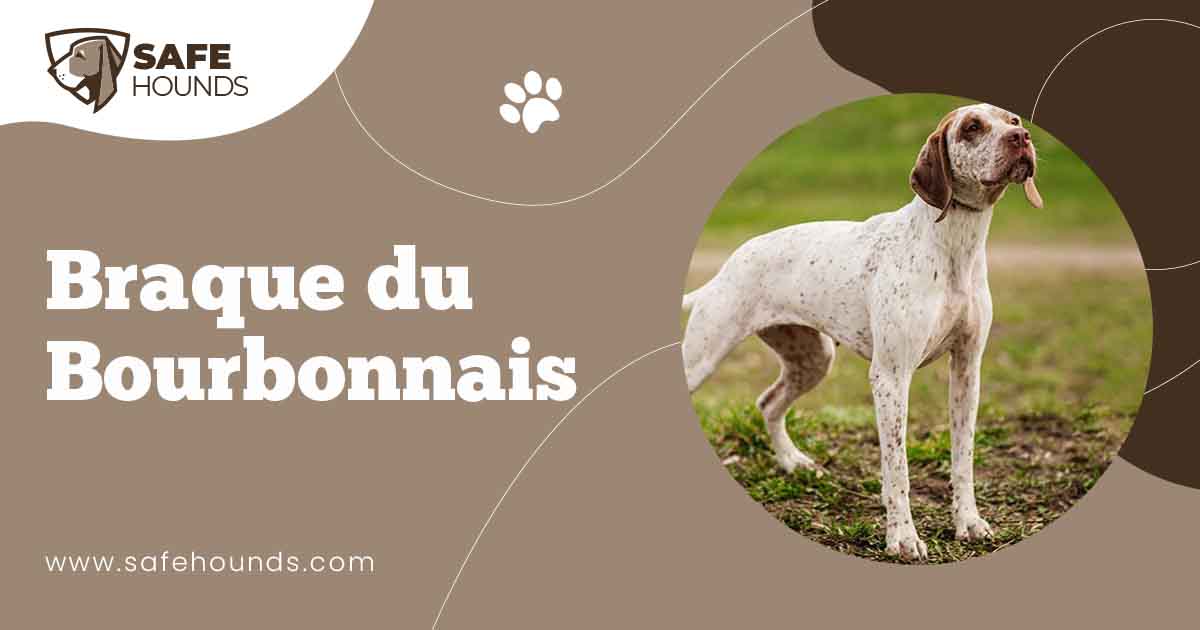 Braque du Bourbonnais, a gundog with rustic appearance was developed in the province of Bourbonn, a region in central France. This breed is a versatile gundog and can even be considered as the ideal partner of every hunter. Aside from a keen nose, the dog has an innate enthusiasm to retrieve. A Bourbonnais is a strong and powerful dog that methodically hunts any type of terrain. This is a tireless hunting dog with an uncanny instinct and ability to pin down pheasants and to track wounded game. A Bourbonnais Pointer has a natural gallop that is a joy to watch. This dog soars over tall grasses!

A Bourbonnias Pointer is often called the short tail Braque because some dogs are born without a tail and those that have tails would have very short ones, less than 6 inches. The short tail makes the breed distinct from any other pointing breeds as most pointing dogs have long tails. This dog has an attractive coat that may appear like peach blossom or faded lilac. The coat can be a little rough to the touch.

A Braque du Bourbonnais is considered to be a complete breed of dog which means that the dog is first and foremost a hunter but it also doubles up as an affectionate and loyal home companion. These dogs were developed to follow a hunter and if you have chosen one to be your pet be prepared to have the dog as your shadow. The dog is not really aggressive but it would not hesitate to act at once at the slightest sign of danger to protect you and your family. This breed develops great affection and loyalty to the human family. Having this dog would be a perfect arrangement as on weekends the dog will be a dependable and tireless companion of the hunter in the family and on weekdays would be the exuberant playmate of the children and a loyal companion of whoever is left at home.

The Bourbonnais Pointer is a medium sized muscular dog that has an elegant appearance. The breed has strong and prominent withers, a slightly convex loin and a chest that is long, broad and deep reaching below the level of the elbows. This breed has rounded well sprung ribs. The Braque du Bourbonnais has a pear shaped head with a prominently marked stop. The nose that takes the color of the coat is big and has well opened nostrils. The upper lips may not be too thick but it hides the lower lips. The eyes are big and similar to the nose would take the color of the coat thus eye color can be dark amber or hazel. The eyes have an intelligent and soft expression. Ears are set slightly above the level of the eyes and falls slightly curled along the cheeks. This breed must have a naturally soft tail with a maximum length of 15 cm. Other specimens are born tailless.

A Bourbonnais forequarters are well constructed, straight and muscular. Hindquarters are well boned and muscular. This breed has a fine short haired coat that can be a little rough to the touch. The dog has longer hair on its back. This breed has two types of coat colors. One is chestnut brown coat that has white patchings. The coat may be moderately or heavily ticked showing a faded lilac or wine dregs effect. The other coat produces a peach blossom effect. In this case the fawn color has predominant white patching. Hairs that are moderately or heavily ticked are mixed close together giving the peach blossom color.

While hunting the dog is tenacious and would show remarkable aptitude to retrieve and to point. The dog would hold the head high, testing the air for scents. At home the dog would have a different personality. The Bourbonnais is calm, affectionate and loyal to the human family. This is a breed that would love to play with the children the same as it would enthusiastically hunt with the master. The dog is intelligent and obedient. Training the dog will not be a problem. Some handlers are even amazed at the capability of the dog to learn the commands after a few training sessions.

Some dogs would be nervous and shy with other dogs. Some would even be aggressive but generally a Bourbonnais would tolerate other dogs and smaller pets especially if they were raised together while still young.

This breed is not one for apartment living. The dog would do well to live with a hunting family or one that has an active lifestyle. The dog would make a suitable jogging and hunting companion. The most suitable living arrangement for the dog is one in the rural or suburban area where the dog would be allowed to play and romp in a fenced in yard. Giving the dog as task to do or including the dog in the activities of the family would stimulate the physical and mental abilities of the dog. This will prevent the dog from being bored. A bored Bourbonnais can be a destructive dog.

The dogs short coat would not need an elaborate grooming routine. The dog has a wash and wear coat that would need very minimal care. Brushing occasionally will distribute the natural oils of the coat and maintain its good condition. This is a hunting dog and ear cleaning and checking is necessary after the dog has gone hunting. Nails must be clipped regularly. Bathing the dog should be done only when necessary.

The Braque du Bourbonnais is considered to be one of the most ancient breeds of pointing dogs having existed in France during the 1500s. Braque is a French word which means to point or to aim. Braque can also mean pointer. The Braque du Bourbonnais took its name from the Province of Bourbonnais, the region in central France is where the breed was developed. It was speculated that this breed originated from the ancient Spanish Pointers. The excellent hunting capability of this breed was mentioned in French literature. The breed was described as an enthusiastic hunter, one that is strong and hardy. Because of the excellent scenting ability the dog is well adept at pointing and retrieving. A Braque du Bourbonnais is sometimes born tailless or if the dog does have a tail, the tail is very short. The breed comes in two colors – fawn which is also known as peach blossom and ticked liver which is otherwise known as wine dregs.

In 1925, a group of dedicated breeders formed the first Braque du Bourbonnais Club. The first standard for the breed was published in 1930. Unfortunately, whatever progress made by the club was wrecked by World War II. In 1598, the breed was already popular because of its prowess in hunting quail. The dogs have been the most dependable companions of hunters. However because of the strict selection the breed almost became extinct. Breeders wanted to create a dog that has a naturally short tail and a coat color of faded lilac. These restrictions severely reduced the gene pool of the breed. Because more consideration was given to the appearance of the dog, the hunting instinct was compromised. For 10 years (from 1963 to 1973) no registration was made on the L.O.F. (the French studbook). Due to the lack of activity, the breed was dropped by FCI.