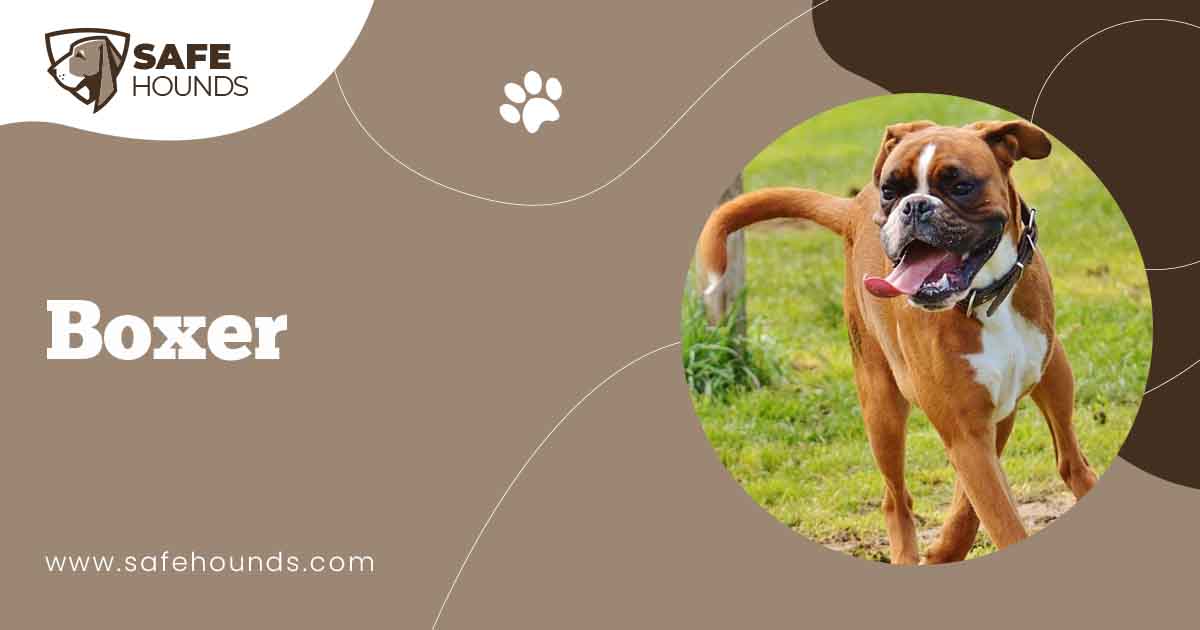 The Boxer is a breed of stocky, medium-sized, short-haired dog with a smooth fawn or brindled coat and square-jawed muzzle. Boxers are known for their powerful bit and strong jaws. They are part of the Molosser family of dogs, bred from the extinct German Bullenbeisser and the English Bulldog.

The Boxer is a remarkable breed. Its exuberance is shown from the puppy stage up through old age. All Boxers are playful even when they are older, they seem to never grow old when it comes to playing. They are always good at making their owners smile. A household that owns a Boxer is one that is constantly filled with joy and laughter.

Oddly enough, the original Boxer ancestors were primarily white, a trait that is now against the official standards of the American Kennel Club. White Boxers are definitely not uncommon, but considered unattractive by the standards of the AKC.

The Boxer was given its name from a description of the way it begins a fight. It stands on its hind legs and begins to make punching motions with its forelegs, appearing as though it were attempting to box.

Boxers are among the most popular breed of dog in all the US, a matter of fact they are the seventh on the list based on the 2006 American Kennel Club report. They have held that position since 2002, with approximately 35,388 new dog registrations.

The Boxer is a muscular, short-coated, square-headed dog with a small tail. Males stand 22½ to 25 inches at the withers and weigh about 70 pounds. Females are a bit smaller than the males at 21 to 23½ inches with a weight of about 60 pounds.

Boxers ears are generally cropped short in this country, but more and more pet owners opt for the long ears.

The Boxers nose is broad, and the top of the muzzle appears slightly pushed in, leaving the jaw a bit undershot. The lower jaw of the Boxer protrudes past the upper jaw with a slight upward curve. The blunt muzzle leaves the dog susceptible to hot, stuffy conditions and can cause wheezing and snorting.

The only acceptable body color in the official standard is fawn, and the only acceptable pattern is brindle. White markings on muzzle, chest, belly, feet, neck, and inner legs are permitted only to cover up to one-third of the body. The face of the Boxer should have a black mask, however, a white blaze line is allowed from the muzzle to between the eyes.

The fawn color of the Boxer ranges from a somewhat light tan to a mahogany shade, the brindle shows clearly defined black stripes on a fawn background. White and black dogs are not uncommon to see, but they are disqualified from the conformation ring. However, they can be registered and compete in obedience and agility.

The Boxer is an athletic dog with a smooth, graceful stride. It has a well-angulated rear for great power. Its back remains level when exerting itself.

Although the Boxer is a loyal and intelligent pet, his stubborn and self-confident character and high prey drives require careful consideration. He must be trained to control his exuberance and guide his mettle into acceptable channels.

It is also good-natured, good with children, accepting friendly strangers, and always ready for a game or exercise.

Above all, a Boxer should be mild-tempered, dignified but with some excitement, and full of courage. Aggression, extreme shyness, and hyperactivity are not uncommon, but unacceptable in the breed. Those who are considering a Boxer should at least check the parent dogs for these undesirable traits before buying.

Hip Dysplasia and Hypothyroidism affect many breeds of dogs and their presence can be determined by testing breeding stock before mating, as they can be genetic. Dogs with Dysplasia should not be bred while ones with thyroid disease can be bred but only with dogs without the disease. This disease can be controlled with medicine. Dysplasia is not controllable but can be corrected or lessened with surgery.

Although the Boxer needs exercise to stay in shape and satisfy his nature, he can do well in a small domestic environment with daily walks and exercise several times a week.

Its short, hard coat does shed and needs some grooming with a soft brush. Its coats natural sheen can be enhanced with occasional rubdowns with a soft cloth. Some recommend a chamois type cloth like the one one would use for car care. Its short coat requires that it be domesticated in cool or cold climates. Its shortened muzzle makes hot humid weather uncomfortable for it.

The ancestors of the Boxer were the German Bullenbeisser, a dog of Mastiff descent, and the English Bulldog. The Bullenbeisser had been working as a hunting dog for centuries, trained to stalk bear, wild boar, and deer. The task of these dogs was to grab the prey and keep hold of it until it was retrieved by the hunter. Years later, the dogs that were faster were the favored and the Bullenbeisser grew lesser and was called Brabanter.

In the late 19th century, the Brabanter was crossed with an English Bulldog to start the line that would become the Boxer we are familiar with today. In 1894, three men, Roberth, Konig, and Hopner decided to stabilize the breed and exhibit it at a dog show in Munich in 1895. the first Boxer Club was founded in 1896. In the late 1890s the Boxer was unveiled to other parts of Europe and in the United States near the turn of the century. In 1915, the American Kennel Club recognized the first Boxer.

During World War I, the Boxer was co-opted for military work, acting as a messenger, pack-carrier, attack dog, and guard dog. After World War II, the Boxer became popular world wide. Returning soldiers introduced the dog to a much wider audience and it soon became a favorite as a pet, as a show dog, and as a guard dog.

It was not until 1949 that the Boxer started to make headlines in the U.S. Bang Away became the most winning Boxer of the century. The first win for Bang Away came when he was only two months old. He was selected by Frau Stockman as Best in Show. Bang Away went on to win the Westminster along with 121 other Best in Show wins over a six-year period.