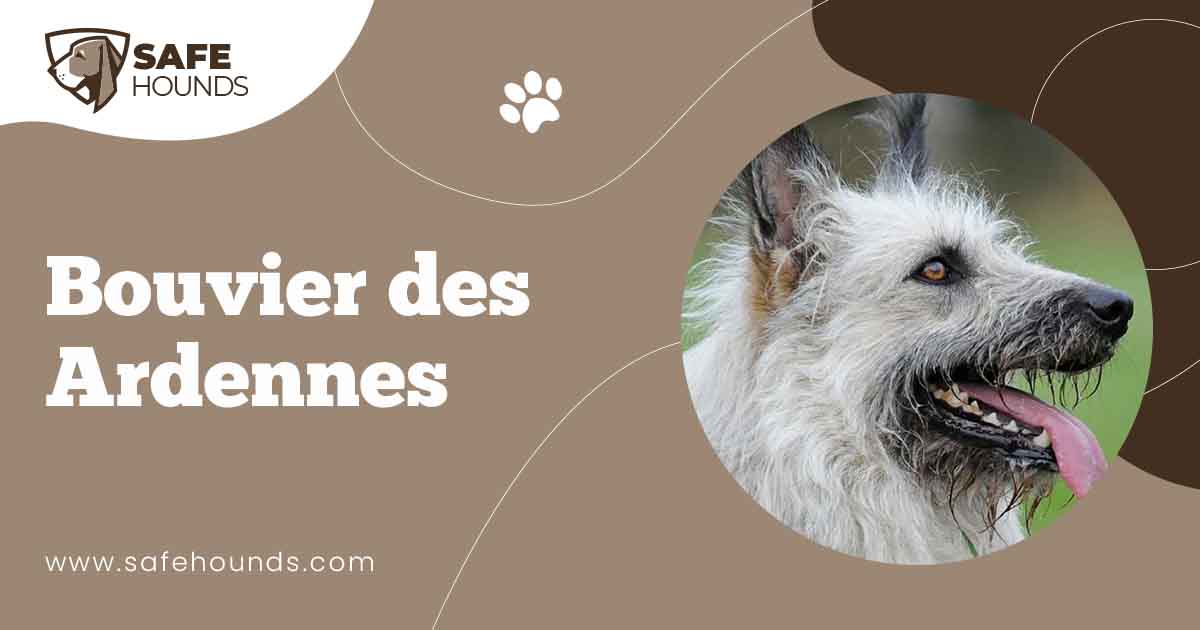 Bouvier des Ardennes is one of the Bouviers used during the ancient times to herd and drove cattle. Nowadays, these dogs are performing other functions but most are still being used as cattle herders. These rustic dogs are used to hard work. These Bovine herders were primarily used to guard, to herd and to drive cattle. These dogs though are very versatile. They have also adapted to herding other animals like sheep, pigs as well as horses. Owners found out that these dogs are also excellent trackers, thus they became the most valued companions of hunters.

The Bouvier des Ardennes is another Bovine herder that originated in Belgium. The name Bouvier de Ardennes was given to the breed as it was primarily developed in Liege, Luxemburg and Namur, the Belgian provinces that forms part of the Ardennes.

A Bouvier des Ardennes is made distinct from other bouviers by the ears that stand naturally. This dog is more modest in size than its cousin the Bouvier des Flanders. Strength and agility is apparent in the dogs well muscled and compact body. These are adjustable dogs that can easily adapt to any given situation. This breed has survived not only the harsh climate but also the poverty of the region where it was originally developed. Poverty stricken people need to develop a hardworking dog that is physically able to work with the livestock. People during those times seldom own horses. The Bouvier des Andennes became a most useful all around farm dog. Aside from herding cattle these draft dogs were also used to turn milk churns, to pull carts filled with produce to the market and perform other tasks in the farm.

A herder by nature, the Bouvier des Ardennes has other qualities that make it an ideal home companion. The dog is affectionate, loyal, and playful and has the inherent trait to protect the family, the possessions as well as the territory it deems as its own.

The Bouvier des Ardennes is a large sized dog with a rustic appearance. This is a hardy dog whose appearance makes no allowance for elegance. The dog is valued for its outstanding herding abilities and not for its appearance. The dog has a well boned and well muscled compact body. Length of body is equal to the height measured from the withers, giving the dog an almost square appearance. The dogs back is broad and firm, deep chest reach the level of the elbows and ribs are well sprung.

A Bouvier des Ardennes head is strong although rather short. The muzzle is broad. Close fitting lips are thin and well pigmented. Well developed nose is broad and black. Medium sized eyes are oval in shape. Dark colored eyes are preferable. The dog has triangular ears that stand naturally. Set on high tails are thick. Some specimens of this breed are tailless.

The Bouvier des Ardennes has a tight fitting but supple skin that is covered with a weatherproof double coat. The outer coat grows to 2½ inches in length, coarse, dry and tousled giving the dog an unkempt appearance. This type of hair covers the entire body of the dog except on the head where the hair is shorter and flatter. Short straight hair covers the ears. The undercoats length is about half the outer coats length, soft and very thick. The undercoat enables the dog to withstand extremely harsh climates. Hair on the face forms a moustache and a beard that covers the corner of the dogs eyes. Coat can be of any color except white. Generally, coat color is a mixture of black, grey and fawn. Some dogs have brownish or reddish coats.

The Bouvier des Ardennes also known as the Ardenes Cattle Dog was primarily developed to guard and drive herds of cattle. There is not doubt that this dog can excellently perform this function. However, this dog is also known to be versatile as it can adapt to any given situation. From the open pastures, the dog can now be found in the homes being the affectionate and loyal companion of the master, the playful pets of the children and the courageous guard that protects the family.

Apart from being an affectionate pet, the dog is very curious. The dog is always underfoot, always want to be included in the activities of the family. These dogs are sociable but they are wary with strangers as they have the tendency to protect their territories. They are good with children they have known from puppyhood. Socialization is imperative. Obedience training and socialization will not be a problem as these dogs are obedient and easy to train. When the dog is performing its herding duties, the slightest sign of command from the master will be acted at once by the dog.

The Bouvier des Ardennes is not one for the city life. This dog is used to living outdoors. Lots of exercise is necessary not only to maintain the physical condition of the dog but also to avoid boredom that will make the dog destructive.

A Bouvier des Ardennes has a rather long hair that is naturally tousled. This kind of coat is prone to form mats if not brushed regularly. Although the dog sheds seasonally, the thickness of the undercoat remains the same. The undercoat insulates the dog from harsh weather conditions. Coat must be brushed thoroughly at least three times a week if every day brushing is not possible. As the hair is very thick line brushing is recommended to remove mats and tangles. Some owners would trim the coat to get away from the tedious regular grooming. However, this kind of coat is marred by trimming. Do not bathe the dog too often as it will remove the natural oils of the coat.

All dogs that herded cattle in France and Belgium are called Bouvier, meaning cattle herder. Different regions in these countries have a distinct type of bouvier. These rough coated dogs are most prized as they are depended upon to herd and to protect the main source of livelihood of the people. These are poverty stricken areas and only hardy dogs known for being tireless workers were retained. These dogs have other uses aside from herding cattle. The Bouvier became all around farm dogs that drove sheep, pigs and other animals. These dogs pulled carts loaded with farm produce.

The Bouvier des Ardennes was developed in the Belgian Ardennes. One theory on the origin of this breed states that this breed was the result of crossing the Picardy Shepherd with the Belgian Cattle Dog. Some people though believe that the Bouvier des Ardennes is a Belgian native breed that existed during the 18th century and was created by crossing several breed of sheepdogs. But what ever the case may be, the dog that was developed possesses the excellent herding capability.

Industrialization and the increase in population have made a tremendous impact on the existence of the Bovine herders. Areas for open pasture lands were tremendously decreased thereby eliminating the need for the dogs. The destruction created by the 1st World War worsened the situation. Bouviers almost became extinct, in fact the Bouvier de Roulers, Bouvier de Moerman and Bouvier de Paret really did become extinct. Fortunately, Bouvier des Ardennes and Bouvier Flandres survived. A few surviving specimens were found by cynophiles in 1985. Revival of the breed was begun.

In an attempt to revive the Bouvier breeds, dog shows were opened. In 1903, the ideal type of drovers dog was found by Professor Reul at the Liege show. The proposed standard was drawn up in 1913 by the Society of Liege. In 1923, the standard was adapted by Belgium and was published by FCI in 1963.