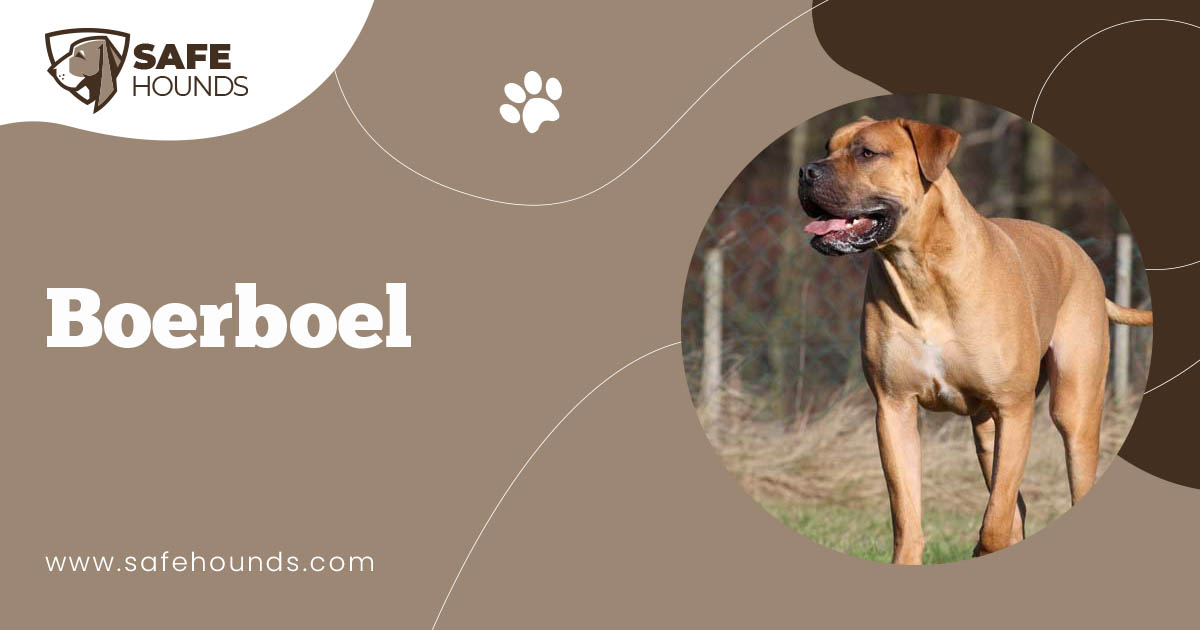 Due to the inhospitable, harsh and often hostile environment pioneers would largely depend on their muskets and dogs for protection. Wild animals like lions, leopards and reptiles not mention hostile raiders pose dangers to the life, livestock and properties of the pioneer farmers. The first line of defense against dangers would be a dog, one that would need to be watchful, alert, strong, agile and one that would possess a high degree of intelligence. A Boerboel fill all these requirements.

The Boerboel is a strong and intelligent dog that has provided people with service and loyal companionship. The dog is also known as the South African mastiff as it is believed that the dog came from the most southern tip of Africa. Boerboel is the African word for farmers dog. As the name suggests, this hardworking dog has a long history of serving farmers by being strong guard dogs that posses the instinctive ability to solve domestic situations. These dogs would thrive and be most happy if given the responsibility to protect the family where it can manifest its inherent protective instincts.

Impressive strength coupled with intelligence and a fierce protective instinct for the home and family it is guarding makes this breed popular not only in the land of its origin but also in other part of the world. These dogs that were originally used as herders and guard dogs because of their brute strength, speed and natural fearlessness are now considered to be one of the best dogs used for guard and police works. These dogs are also used as therapy dogs.

Surprisingly, these dogs that are noted for its protective instincts have not developed a strong aggression and destructive behavior. Boerboels are gentle, affectionate and playful. These dogs are known to have a good sense of humor and would love nothing more than to play a game of fetch with the master and the kids. These dogs are fun loving, would love every minute of allowing the kids to ride them like a horse and would relish all the attention it would get. These dogs are also friendly with other smaller pets. They would even tolerate cats and other pets filch food from them.

However, because of the dogs protective and guarding nature they have developed a strong sense of territoriality. They can be very aggressive to strangers and would not let anyone enter the home if the master is not around. Even if they are introduced, it would not be surprising to see them keeping a close watch over the visitors.

Rather than beautiful, the word to describe a Boerboel is impressive! This South African mastiff is powerfully built. The massive head, the muscular smooth coated body is what makes this breed imposing. The fierceness and the physical structure is all for show as this mastiff possess a remarkable eagerness to please. This breed is so gentle (at least with the people he knows) and makes a loyal family dog and an invaluable hunting companion.

When you see a Boerboel, the first thing you would certainly notice is the massive head. The alert as well as the highly intelligent expression would give you a hint on the total character and personality of the dog. Being working dogs by nature, this breed of mastiff is big with a well developed muscular body. The muscular rather short head is broad with well filled checks. The prominently muscled flat and broad occipital area and the side of the muzzle give the dogs head an almost square appearance. The color of the wide set eyes ranges from shades of yellow and brown though 90% of the breed would have eyes of lighter color than the pelt. Eye lids are well pigmented. The black muzzle with widely spaced large nostrils slightly tapers to the front. The dogs upper lip that covers the lower lip is loose and fleshy. The strong jaw, like the muzzle also narrows slightly to the front. Boerboel has strong well developed teeth that meet in a scissors bite.

The dogs medium sized V shaped ears are proportionate to the head. Ears are set high against the dogs head and would normally hang against the cheek. The ears form a straight line with the top of the dogs head when it is alert and ready to act. A boerboels neck just like the rest of the body is also muscular. Of medium length, the neck that show an obvious muscle curve is attached high on the dogs shoulder. The muscular neck is covered with a loose skin under the throat and would tauten between the front legs. Attached high to the body is the straight short tail.

A Boerboels skin is loose, thick and well pigmented. Wrinkles on the dogs forehead are most noticeable when the dog is watchful and ready to act. The thick and sleek coat comes in creamy white, tawny and in all shades of brown.

Boerboels first and foremost are guard dogs. These are intelligent and fearless dogs. What sets them apart from any other guard dogs is the fact that they can guard and protect without being aggressive. These dogs seem to posses a 6th sense that enables them to recognize a threat to the family he is guarding. They would know if the master approves or disapproves the presence of a stranger but they would not act unless specifically told to do so.

These dogs make wonderful house pets as they are known to be patient and gentle with children they know. They would tolerate visitors if properly introduced but being born guard dogs, they will always be alert and watchful.

A Boerboel is not recommended for people living in apartment buildings. This breed would need the outdoors. A fenced in yard of reasonable size would be suitable for the dog as they would need a lot of exercise. This dog would love to play with the kids. These dogs can live outdoors but the owner should take care not to leave them alone for long period as they can be destructive. Leaving them unleashed in an unsecured area can be dangerous as these are territorial dogs and can be very aggressive to passersby.

A Boerboel is an average shedder. The short coat would need very minimal care and maintenance. Brushing once in a while and a monthly bath would be sufficient. However, it is advisable to regularly check the ears, nails and teeth.

Much have been written about the Boerboel as it is considered to be the only breed of guard dogs in the world that was developed without being aggressive. The breed originated from South Africa however, the breed from where Boerboel was developed was never ascertained.

It was said that when Egypt was conquered by Assurbanipal, Assyian dogs were spread to Africa and to the rest of the world. Alexander the Great also spread the dogs to Europe. From these Assyrian dogs two types were developed, the hound and the mastiff. Hounds were utilized for hunting activities and the mastiffs were primarily used as guard dogs.

The mastiff was brought to South Africa when Jan van Riebeeck brought Bullenbijter, his large mastiff dog to Cape the Cape in 1652. The Cape of South Africa is a wild and unknown strange land. To protect him and his family from unknown dangers, he brought his dog. Settlers from other countries also brought along their dogs. This resulted to a lot of in breeding. A dog would need to be tough to survive the harsh environment and the dangers of the continent. The African Boerboel is the result of the in breeding of these tough mastiff types of dogs. It is also speculated that the Boerboel has the blood of the dogs of the Hottentots.

During the Great Trek that started in 1838, the Voortrekkers scattered their Boer dogs in distant farms all over the land. The Boerboel inbreeding resulted to tougher and stronger dogs. These dogs were developed by the pioneer owners to be loyal, obedient and great protectors that will guard and protect his family. These dogs were also developed to work.

In 1938, the De Beers imported to South Africa a bull mastiff to guard the diamond mines. This mastiff together with a champion obtained from the Hottentots played an important role in the breeding and development of the Boerboel. During the second Boer War in 1902, the Boerboel was cross bred with the bull mastiffs and the long legged bulldogs brought by the Englishmen resulting into a tougher dog with capabilities to withstand the rigorous trials of time. Farmers in Northern Natal, in the North Eastern Free State and ion other parts of the Transvaal can attest to this fact.

Lucas van der Merwe of Kroonstad together with Jannie Bouwer of Bedford has started a search for the original Boer dog in the 80s. From the 5500 kilometers that were covered, 250 dogs were found. Of these, only 72 were selected for registration. Presently, the breed is still relatively unknown and considered to be rare. However, in 2006 Boerboel was included in the American Kennel Club Foundation Stock Service List.