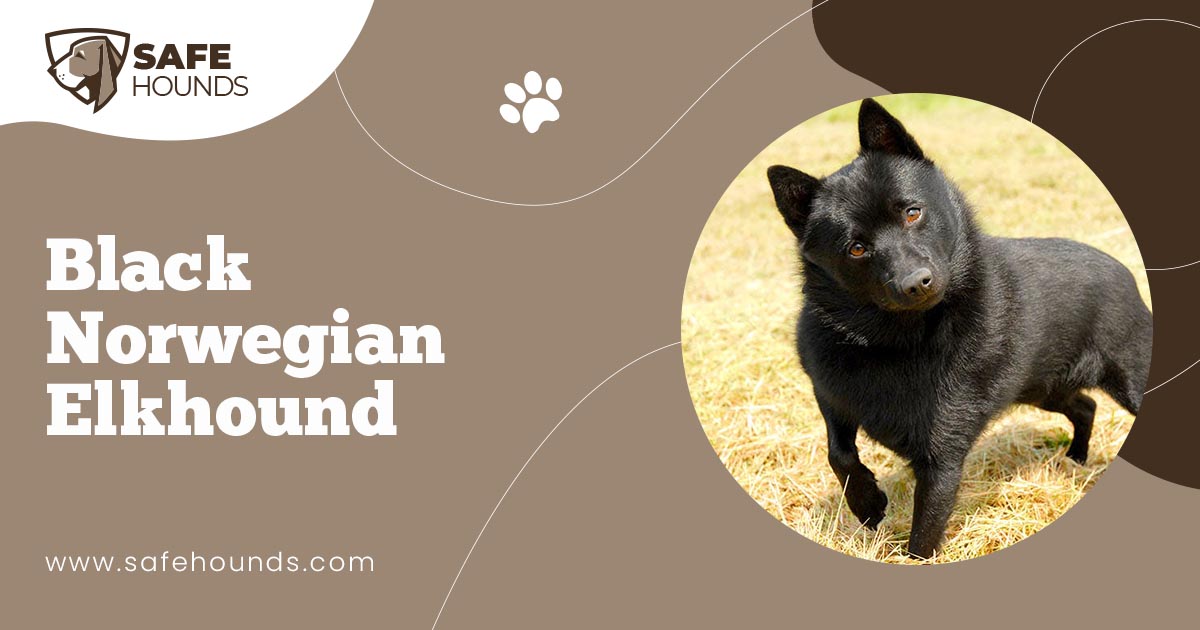 The Black Norwegian Elkhounds structure is smaller as compared to the other two Norwegian Elkhounds, the Jamthund and the Grey Elkhound. The dog stands from 18 to 21 inches and weighs from 40 to 60 pounds. However, this newer addition to the Norwegian elkhound family is an agile and strong breed that has the capability to tirelessly hunt for hours. A Black Norwegian Elkhound running after its prey, the black glistening coat a stark contrast against the snowy Norwegian terrain would be a wonderful sight to behold. The dog would seem to fly with its light and effortless mile-eating gait.

The Black NorwegianElkhound is a typical spitz type dog with a squarely built body. This dog has a wedge shaped head that is broader between the ears and tapers to the nose. The skull is nearly flat. This dog has a well defined stop. The gradually tapering muzzle has a straight nasal bridge. The dog has a black nose and dark brown eyes that have a keen and intelligent expression. Black pigmented lips are tightly closed. Jaws are strong. Complete set of teeth meet in a scissor bite. Pricked pointed and wide based ears are set on high. Medium length neck is covered with tight fitting skin. The short compact body has a topline that is straight from the withers to the croup. The well developed loin is broad and straight. The well muscled croup is broad. A Black Norwegian Elkhound has a relatively deep chest with well sprung ribs. The belly is slightly tucked up. Set on high, the short thickly coated tail is usually curled and carried over the back. This breed has strong straight forearms and muscular lean hindquarters. The all weather coat allows the dog to hunt even under heavy autumn downpour and extremely cold weather in Norway. The dense coat that is rather rough to the touch lies close to the body. The head and the front of the legs are covered with shorter and smoother hair. Hair is longer on the neck, chest, back of legs and on the underside of the tail. The longish topcoat is coarse. The black undercoat is soft and wooly. The shiny black coat with little white markings on the chest and feet gives the dog an impressive appearance.

The Black Norwegian Elkhound is a friendly, playful breed that makes an ideal companion and playmate of the children. This dog that forms a tight bond with its family is known to manifest its protective nature whenever a threat to the family is discerned. The dogs intelligence is believed to be higher than the intelligence of the other Norwegian Elkhounds. However, the dog is known to be independent minded. Training the dog should be easy but the dog would oftentimes show it stubborn streak. Obedience training and socialization must be started while the dog is still young as apart from being more manageable, puppies would manifest an eagerness to please attitude. Socialization is very necessary for the breed to curb the tendency to be dominant and aggressive with other dogs and smaller pets. The dog would be a good choice for a dog-experienced owner that is living in a rural setting. The dog has high exercise requirements. A home with a well fence yard will make sure that the dog will have a good run every day.

The Black Norwegian Elkhound is not a hard dog to groom as this is a generally clean breed. The coat dispels water and dirt easily. Regular brushing would be enough to maintain the good condition of the coat. Frequent bathing will not be necessary for this dog as it does not have a doggie smell. Moreover, frequent bathing must be avoided so as not to remove the natural oils that weather proofs the coat. This breed is a seasonal heavy shedder. Brushing must be done more often when the dog is shedding. It is necessary to remove the dead hair from the coat other wise it will cling to the new hair and form mats.

Norwegian Elkhound is an old breed, it is in fact considered to be one of the oldest breed in the world that are still in existence. It is probable that these dogs were used during the Stone Age. It was speculated that these dogs have been the loyal and dependable companion ever since the time when man hunted with slingshots. Elkhounds have been used to hunt elk, moose, bear, lynx, wolves and a variety of other game. The name elkhound is a mistranslation of elghund, a word that is used by the ancient people to refer to moose dogs. Ancestors of these dogs have been in existence in Scandinavia during the time of the Vikings 6000 years ago. The dogs were used by the Vikings to hunt and to guard them against wolves, bears and other ferocious wild animals. Archeological remains of a dog similar to present day Norwegian Elkhound was found in Norway. The skeleton that dated back to 4000 – 5000 BC verified the dogs ancient existence. Historians believe that these dogs changed very little since the time they were used by the Vikings.

Throughout the history of the Norwegian Elkhound, the dogs were mainly utilized to hunt large game. The dog is a tenacious hunter noted for its ultrasensitive nose that can scent game several kilometers away. The dog can easily track its quarry and once found, will hold the animal at bay by barking until the hunters arrive to make the kill. These dogs were originally used to hunt elk and moose but in recent years the dog has hunted smaller game as well. Norwegian Elkhounds are government properties. In case of war, these dogs can be mobilized to be sled dogs that will carry military supplies. Scandinavian law stipulates that privately owned dogs can be called by the countrys Defense Minister to serve in the war.

No formal breeding was done during the dogs early years of existence. Breeding was done through natural selection. When FCI set out to organize this dog type, it was found out that three distinct types have emerged – the Jamthund which was the biggest, the middle sized Grey Norwegian Elkhound and the smallest dog commonly called Black Elkhound. The Black Norwegian Elkhound is not as old as its other Norwegian Elkhound cousins. This variant of the Grey Elkhound was bred in Norway during the early 1800s. The Black Norwegian Elkhound was primarily developed to hunt like the two types of elkhounds. This dog is smaller but it is more agile, more courageous and noted for its higher level of intelligence. The dog is highly valued not only for its hunting prowess but also because it is easier to spot in the snowy landscape of Norway.