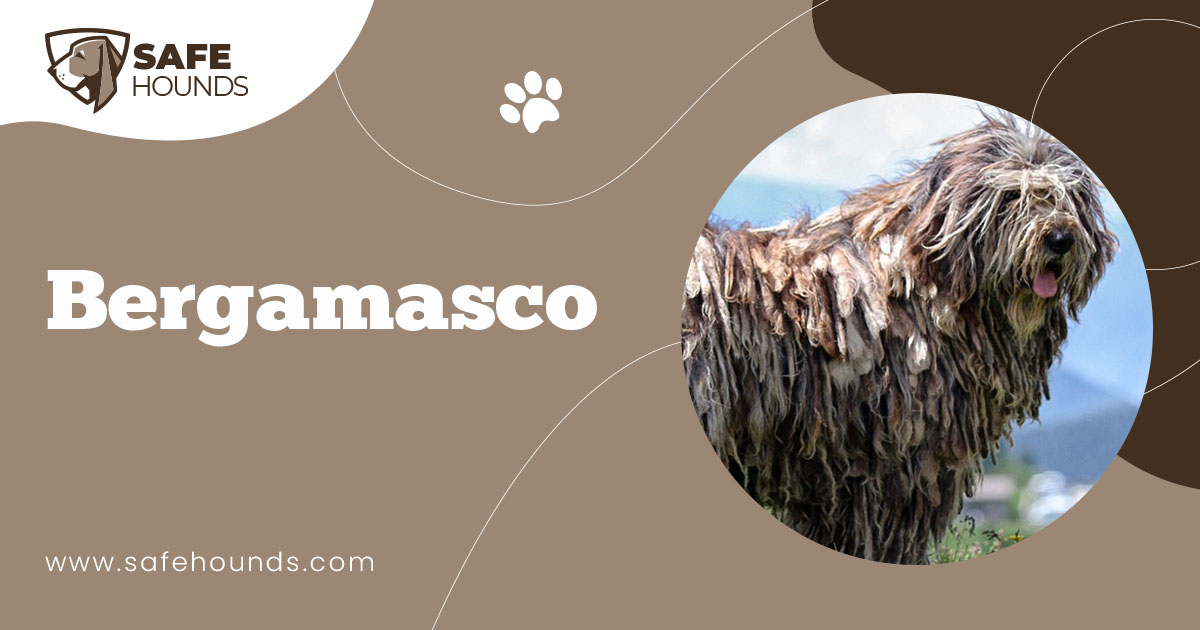 Bergamasco, also known as the Alpine sheep dog has very ancient origin. This breed that is believed to be more than 2000 years old is one the sheepdog breeds deemed to be have descended from the shepherd dogs brought by the Phoenicians to Italy. The breed spread out northward throughout Italy into the Alpine Chain. It is believed that this long haired dog is the ancestor of the Briard in France, the central Italys Maremma and the present Bergamasco of Northern Italy.

Bergamasco shepherd dogs are highly intelligent dogs. Their natural intuitiveness makes them an indispensable shepherds helper and companion. Bergamaso are considered to be excellent herding dogs as their tenacity enables them to easily round up sheep scattered in pasture land and drive them through narrow mountain paths and over difficult terrain. Although always alert, these dogs are known to be quiet when their participation is not needed by the master. These dogs are excellent companions as they can be very loyal. As close bond with the human family is established, these dogs would prefer to be always at the side of the master. They have a sweet face that conveys an imploring expression not to be left alone. A Bergamasco is always attentive. Even if it seems to be sleeping, the dogs eyes will follow the movements of the master, always ready to go at the slightest command. Although they can be trained to accomplish a variety of tasks, these dogs are not the fetch and go kind. They abhor useless tasks and would conserve their energies to do more useful tasks. The dogs tenacious attitude makes it persevere until a task is done. This strong and rustic dog can adapt to any rugged terrain and harsh weather and would thrive more in a rural setting where it can roam unleashed and free. These dogs are excellent companions for active people who prefer to have an outdoor lifestyle as Bergamascos would require a lot of open space.

Bergamascos are healthy medium sized dogs that are primed by the Italian Alpine weather and environment. The dog has a rustic appearance. Its compact and well proportioned body gives it a powerful and strong appearance. The striking build is made even more magnificent by the thick coat that sets the breed apart from any other long haired dogs. The coat is the distinguishing feature of a Bergamasco. This breed abundantly grows three types of hair that forms mats or flocks. The color of the coat ranges from gray, silver gray, black, shades of fawn and white. The color of the coat is often intermixed giving a mottled or speckled effect. This intermixing of colors served as the dogs camouflage.

The dogs coat is made up of three types of hairs, the undercoat, the goat hair and the outer coat. The undercoat that is short, thick and finely textured is kind of oily and soft to the touch. This serves as the waterproof layer. The hair that grows from the withers to the midpoint of the body is usually the straight and roughly textured goat hair. The back of the dogs body as well as the legs are covered by wooly outer coat and sparsely growing goat hair. The goat hair and the outer coat mingle and form the flocks. The hair grows profusely and mats are fully formed when the dog is about three years old. The mats or flocks that start from the spine grow to completely cover the flanks and reach the ground. Soft hair grows on the head to completely cover the eyes. The hair serves as a visor to shield the eyes from the glare reflecting from the snow on the Alpine mountains.

Bergmascos litter size is from 6 to 10 puppies and have an average life span of 13 to 15 years.

A Bergamasco is a medium sized well proportioned dog with a rustic appearance. These dogs are heavy boned and muscular. The thick coat, the large head and the thick tail amplifies the dogs heavy appearance. The head is quite long but it is proportionate to the dogs size. Skull is slightly domed with a rotund forehead. The blunt muzzle slightly tapers towards a large black nose that has well opened nostrils. Large, oval brown colored and black rimmed eyes have an attentive and serene expression. The soft and thin ears that are set high on the head hangs down the side of the face. The ear is triangular but has a rounded tip. The soft wavy hair that covers the ears forms fringes at the tip.

The body of a Bergamasco is a bit longer than its 23½ inches average height. The dog has well sprung ribs and the rib cage reaches to the level of the elbows. The tail is broad at the base and tapers at the tip. As mentioned before the unique coat is the distinguishing feature of this sheep dog. The thick and profusely growing coat forms mats that completely cover the dog from the spine to the flanks. The coat color can be solid gray or merle of different shades that give a mottled appearance.

Bergamasco dogs are highly intelligent. This intelligence was steadily developed as the dog have to deal with varied problems and difficulties that could arise while tending the hundreds of sheep scattered on the slope of the alpine ranges. Bargamasco is a peaceful breed. These dogs show respect for each other and are not known to irritate or provoke other dogs. These dogs make suitable guard dogs as they can be very reserve with strangers. Although always alert, they would not show aggressiveness unless there is a serious threat to the human family. Owning a Bergamasco dog is comparable to having a nanny for the kids as these dogs would be attentive and tolerant around children. This dog is often utilized as therapy dogs for handicapped and disabled kids. Bergamasco would usually tolerate smaller pets like cats especially if they are brought up together. Other dog breeds will also be tolerated as long as they dont pose a threat.

These dogs are used to seasonal climates. Because of the exceptionally thick and long coat that gives these dogs protection, they can easily cope with extremely cold weather condition. A Bergamasco sleeping outdoors would not be an uncommon sight as these dogs would not appreciate being cooped indoors. These dogs will not do well in an apartment building. A house with a yard will be suitable as the dog will be given the chance to roam, to romp and exercise as if it is still living and working in a farm.

Although the Bergamasco is noted for its exceptionally dense coat, it requires very little grooming. The flocks would form naturally but in some specimens, the coat would form into a uniform and consistent flocked fleece in which case the hair must be separated and formed into smaller mats by hand. The dog does not shed therefore minimal brushing is required. Dogs that live indoors can be bathed more frequently but those that are allowed to live outdoors should be bathed 1 to 3 times a year. This is to ensure that the oil that waterproofs the hair is not removed. Shampoo should be used sparingly so as not to dry the coat. It is preferable to bathe the dog in the morning to give ample time for the hair to dry. The flocks would not need any brushing but the hair on the head can be brushed. Take care not to brush the hair while it is still wet. The coat should not be trimmed but it would be acceptable to trim the hair in the genital area especially when it gets too long.

Bergamasco is an ancient breed of sheep dog that is said to have originated from Persia (Iran). The dog is also known as Cane de Pastore de Bergamasco, Alpine sheepdog, Italian Alpine sheepdog and Northern Italian sheepdog. It was believed that these dogs are the descendants of the Maremma sheepdog and the Briard. It was speculated that Bergamascos ancestors are the Asian herding dogs that were brought to Europe by Phoenician traders. These traders are known to have barter transactions with the nomadic shepherds and exchanged the dogs with sheep. Eventually, the dogs were brought to the Italian Alps and given the name Bergamasco. Trained to guard and guide the flock, these dogs developed into an extremely intelligent breed so much so the shepherds have kept the bloodline a secret.

Before World War 11, wool production considerably decreased thus the need for sheepdogs also declined. The Bergamaco almost became extinct. It was Dr. Maria Andreoli who saved the breed from extinction. This Italian breeder used the science of genetics to develop the Bergamasco bloodline. Soon after, the Valle Imagna Kennel in Piero Rota farm situated in the Bergamo hills of Italy has started breeding Bergamasco. Other kennels were established. One of these kennels is the Valle Scrivia, the oldest kennel in Italy. Interest for the breed spread across Europe and in the early 1990 the breed was brought to United States.