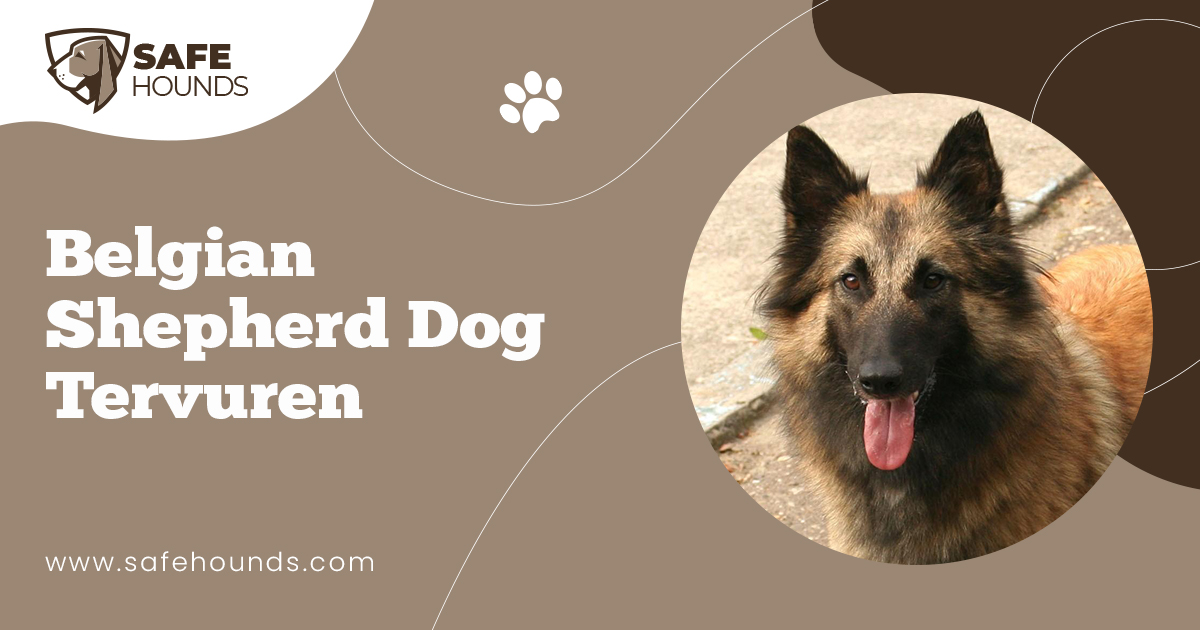 The Belgian Shepherd Dog Tervuren is one of the four breeds that stem from the Belgian Sheepdog family. It is obedient, intelligent and a very hardworking dog. They like to have tasks to do and do exceptionally well when they have work to do. They like to have something to do constantly, so they do not become bored or tired and lazy. The Belgian Shepherd Dog Tervuren is watchful and very protective. They like to be dominant, so it is necessary that they be trained early on. They need to be trained patiently but sternly, and never harshly or they may become shy or sensitive.

Belgian Shepherd Dog Tervurens are instinctively protective and make wonderful watchdogs. This breed is more commonly known to be used for working instead of being a family companion, like two of his brother breeds. They are alert, loyal, and thrive on the love of their companions. This breed loves attention and may become mischievous at the owners expense if he is ignored.

The Belgian Shepherd Dog Tervuren tends to bond strongly to one or two people and stays close to their companions and family. They are very protective and can become dominant if not properly introduced to strangers, children, and small animals. This breed can be difficult to control if not properly trained and if there are any signs of anger or aggression, this animal should be left alone. Overall, Belgian Shepherd Dog Tervurens are great workers, love their families, and are fun loving in nature.

The Belgian Shepherd Dog Tervuren is a solid muscular and elegant dog. Usually described in the shape of a square, he has a strong stance and proud carriage. This breed tends to have very solid, bulky back legs, but do not look heavy. They have proportionate triangular shaped ears that stand erect and help aid in detecting and being a watchdog. They have small almond shaped eyes that seem to gleam with a look of questions and alertness.

They have a flat skull parallel to the muzzle, which is not considered pointy, but straight. The Belgian Shepherd Dog Tervuren has an all black nose with lips pulled tight across a scissor-like bite. They have a deep chest that reaches to their elbows and is not considered narrow or broad. Their front legs are very straight and parallel to one another and they meet unusually closer at the feet than they do at the knee. Their feet are considered to look like round, cat-feet. The hindquarters are very muscular and big but do not look bulky or heavy. In addition, they have a very long feathered tail, covered in the same color as their coat.

The Belgian Shepherd Dog Tervuren has a longer double coat and it usually comes in the colors of fawn, mahogany, or grey. They tend to darken as they age and can become a completely different color altogether. The coat is harsh, straight, and tipped with black. They sometimes have white on the chest, toes, and chin. The hair on the head, legs, and outer surface of the ears is short. He is light and graceful when walking and does not shed excessively. Depending on their sex, they range from 22-26 inches tall and weight between 60 and 75 pounds.

The Belgian Shepherd Dog Tervuren is a very demanding dog that thrives on attention. They like to play, run around and are known to show signs of herding such as running in circles, nipping at people ankles, and chasing imaginary things. They are very intelligent and have been used with the police, in wars, and as watchdogs. They are very protective and like to make sure their family or companion is safe at all times.

Usually sweet in nature, The Belgian Shepherd Dog Tervuren can become shy or sensitive if not properly trained. They like to have a lot of room to roam around and need plenty of exercise. If they are caged up or kept away from the family, they may become angry or mischievous at the owners expense. They are fun loving, sweet, protective, and thrive for attention. They should never be fenced away or caged in away from family and other dogs.

This breed of dog has no major health problems and they live a long life of between 12 and 15 years. They need a lot of exercise and do not do well if caged up because they need to run around and play. They will do okay in apartment life, as long as they get enough exercise. They prefer cool climates and like to be around their families. They should learn to sociable at a young age. The Belgian Shepherd Dog Tervuren sheds moderately. They normally shed their coat twice per year once in the spring and then again in autumn. They should be brushed often and bathed infrequently. Their back nails should be de-clawed and the front is optional. They are easily maintained if trained properly and exercised frequently.

The Belgian Shepherd Dog Tervuren is one of the four known Belgian sheepdogs. The three other dogs are the Malinois, Groenendael, and Laekenois. These breeds are all widely accepted as their own breed except for in The United States. In 1959, The American Kennel Club first recognized the Groenendael, Malinois, and Tervuren as separate breeds, but has not recognized the Laekenois. All of these breeds were developed for the use of working, something they still hold true today.

The Belgian Shepherd Dog Tervuren was named after a Belgian village. This breed was developed and used for the following tasks: in herding, protection and law enforcement, detection of narcotics and bombs, search and rescue, tracking, obedience, sledding, agility and assistance to disabled, ill, or elderly people. They are also wonderful companions and mans best friend.

This dog was bred for herding something in which is an ability they hold today, as you will often times see them running after imaginary objects and nipping at people ankles. The first person to breed the Belgian Shepherd Dog Tervuren is Brewer M. Corbeel, who bred his dog with another breeder, named M. Donhieuxs, dog. They were developed from sturdy hard working dogs and still work hard today. You will see that the Belgian Groenendael and Tervuren are used as companion dogs while the Laekenois and Malinois are used as guard dogs. The American Kennel Club recognized The Belgian Tervueren as its own breed in 1959.