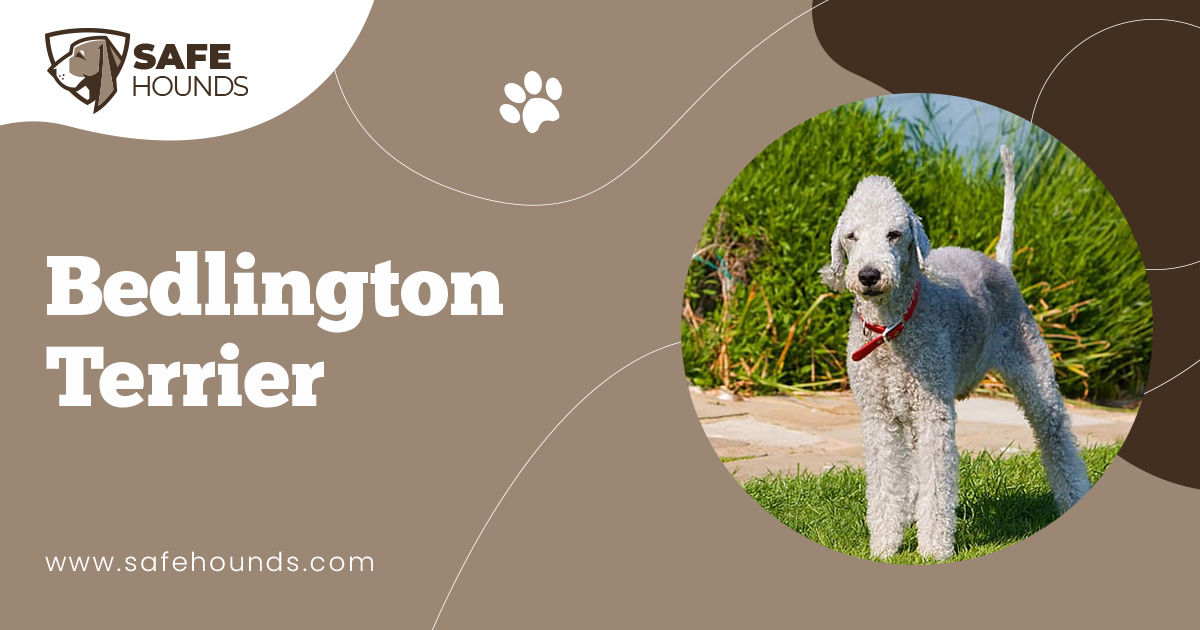 The Bedlington terrier is often described as looking like a sheep with the heart of a lion. They have very similar characteristics to a sheep including their curly coat, pear shaped head, and arched back. The Bedlington terrier is considered friendly, joyful, and will get along with all children and most strangers. Bedlington terriers are headstrong, loyal, and love their families. Despite their gentle appearance, they may not get along with other dogs if they are too dominant. If they become annoyed with them, they can be a terrifying fighter if challenged. They must learn to live with cats and small animals from the time they are young or they might not get along with them well.

Bedlington terriers are very energetic and full of spunk. They love to dig and can run at very, very fast speeds. Bedlington terriers are courageous and can be high-strung if in the wrong environment. They like to run and get exercise and should have a large yard to accommodate their playtime. They like to chase things and bark. Bedlington terriers should never be let off their lead unless they are in an enclosed area because they may wander off, run away, or chase something out of sight. They become bored and mischievous if they are locked up or do not get enough exercise. They are great family pets, and can be considered wonderful watchdogs.

The Bedlington terrier is often compared to a sheep because of its similar appearance. His head has no stop and is straight from the crown to the nose. They have small, deep set eyes that usually have a look of joy and playfulness. Bedlington terriers have a thick, curly double coat that consists of both soft and harsh hairs. The coat comes in three colors: Sandy, Liver or Blue, and may have tan marks on the eyes, legs, chest, and rear, and these may become lighter as they age. The Bedlington terriers coat does not shed, but does require specialized clipping every 6 weeks to maintain it. He has a moderate length tail and long fur on his close-set paws.

The Bedlington terrier is a fun and energized dog that has a springy step to their walk. He is built for speed and is muscular on his legs and back. Their body is somewhat unusual for a terrier and is compared to a whippet or greyhound because of his endurance for great speed and agility. Depending on their sex, they are between 15 and 17 inches tall and weigh between 18 and 23 pounds. Bedlington terriers have odd shaped legs, being closer together at the feet rather than at the elbows.

Because of the Bedlington terriers odd-shaped body, resembling a lamb, it can easily turn or pivot because of the way his legs are shaped. He is considered dainty when he walks and is very sweet and gentle to touch on the underbelly. Bedlington Terriers have lots of wool-like fur and should be groomed correctly and frequently.

Bedlington terriers are exciting, fun dogs with lots of spunk and drive. They have been known to fight until their death in dogfights and never give up chasing something until they have accomplished their goal. They will do almost anything asked of them by their owners and are very loyal and sweet. They are friendly towards children and make great house pets and companions.

Bedlington terriers are okay in apartment life, but need to be exercised on a daily basis to maintain a healthy life and proper care. They do best when they have a fenced in big yard where they can run, play, and dig. They are conveniently sized and are less rowdy that most terriers. They can have a calm nonchalant demeanor about them that is filled with love and affection, but once let outside to play they can become happy, spunky, and playful.

The Bedlington terrier is more high maintenance than most dogs. They need to have specialized trimming for their coats about once every 6 weeks. Bedlington terriers do not need to be bathed much, as their coat may become weak and loose, which is not flattering on this dog. Bedlington Terriers do not shed, but they do require brushing every day and grooming on a regular basis. They should get vigorous workouts and should have tons of exercise everyday, which can become a hassle if you are not fit for the job. They require lots of play or they become tired and bored.

Bedlington terriers were originally known as the Rothbury or Rodbery Terrier. This name derived from a famous female dog of bedlington breed from Staffordshire by a company of nail makers that eventually settled in Rothbury, which is a district on the English border. In those times, Bedlington terriers were mainly used for hunting small rodents and working with foxhounds, which were common in that area.