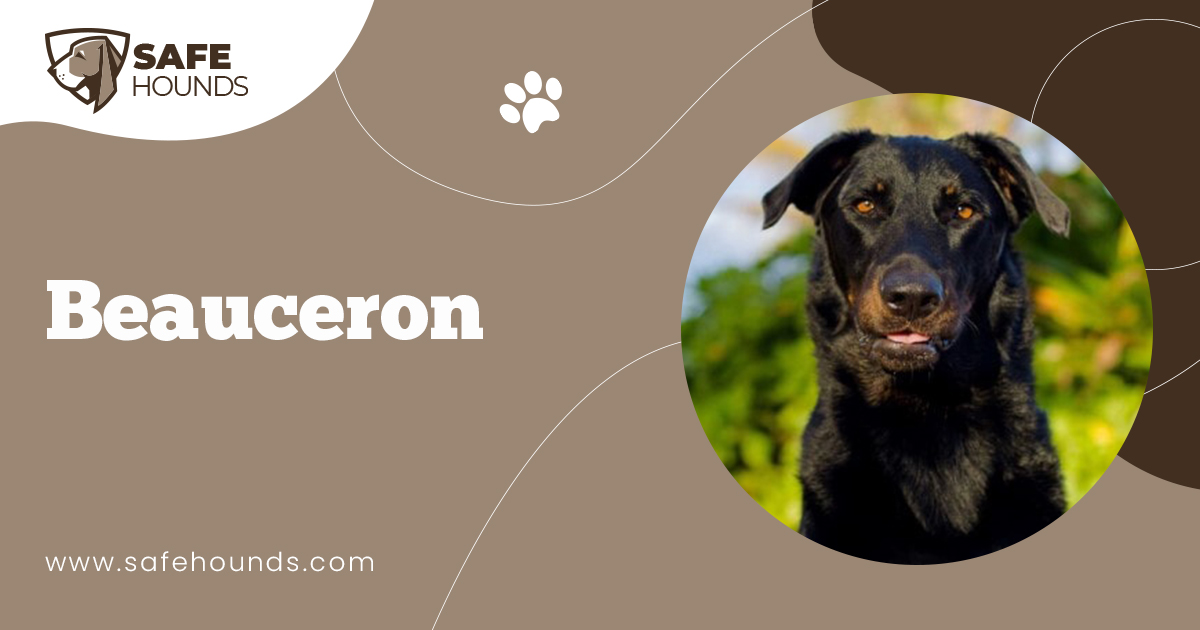 The Beauceron originated in La Beauce, the plains region that surrounds Paris. This dog that dates back to the 1500s was originally developed as a shepherd dog. The Beauceron is a large dog known for its endurance, strength and agility. This is the second most popular dog in France, the Briard being the first. The Beauceron is still extensively used these days to herd sheep and cattle. This is an indefatigable dog! It can travel 50 miles a day, acting as a living fence around 200 to 300 heads of cattle.

This is a versatile breed. Apart from being an outstanding shepherd, the dog excels in other areas too. Being highly intelligent the dog can easily grasp what the master wants him to do. Because they have the fervent desire to please the master the dogs are known to follow and obey commands. The dog was used by the French army during the two World Wars. These are very courageous dogs that can not be deterred by bomb explosions and military fires. The dog was used to deliver messages, ammunitions and food to the front lines, have been used to pick up trails, detect land mines and search for wounded soldiers. A painting at the British War Museum depicting a Beauceron with a message cylinder attached to the collar and leaping over a foxhole with soldiers pays tribute to the heroic deeds of the dog during the war.

For years the dog has served people. They have acted as therapy dogs, protection dogs, police dogs that excel in search and rescue operations, in bombs and narcotics detection, in criminal apprehension, prison security and other police works. This breed is being used as guide dogs for the blind. These are extremely athletic dogs that excel in competitive sports. Most importantly, the Beauceron has evolved into a loyal and protective house companion.

The dog possesses intelligence and a kind of psychic ability to know the moods of the master and to understand at once what the master wants. This fact is deemed nonsense by non believers but Beauceron owners have attested to its truth. The dog is a through and through protector of the family. The dog appears to be calm observing, but ever ready to intervene whenever necessary.

Beauceron is a dog with well balanced and well muscled body that gives the impression of strength, agility and endurance needed to excellently perform its duties as a herding dog. A Beauceron has weather resistant double coats. The outer coat is coarse to the touch, grows from 1¼ to 1½ inches in length, dense and lies flat to the body. The fine downy undercoat is gray colored and is not visible through the outer coat. Coat colors can be black and tan or harlequin. Black and tan dogs resemble the Doberman Pinscher up to the two tan lozenges above the dogs eyes. Tan markings also appear on the lower part of the upper lip, on the throat and on the breast. A Beaceron is also called the Bas Rouge (Red Stocking) because of the distinctive reddish tan markings on the legs. A harlequin coat is gray, black and tan in color. Black and tan are the base color. Blue-gray patches are distributed all over the dogs body although the black color predominates. Hair is short, fine and smoother on the head, ears and lower leg and longer on the neck. Back of the thighs and the tail are lightly fringed.

A Beauceron has a well chiseled head that is proportionate to the body. Well developed nose is always black. The dark brown oval shaped eyes have a confident, alert and frank expression. Set on high ears may be natural or cropped. Cropped ears are erect. Natural ears that are rather short and flat are semi-pricked. A beaucerons tail is strong at the base and carried low with a hook at the end that forms a J. Hind leg of this breed have double dewclaws making each foot to have six claws. Dewclaws must not be removed on show dogs.

There are many sheep herding dogs in France but the Beauceron is one of the most preferred. This is because the dog is an excellent and tireless shepherd. The Beauceron has found its way into the homes of dog lovers as it is a calm, obedient and intelligent dog that has a strong instinct to protect the family. These dogs are forever vigilant, always ready to defend the master and his family whenever necessary. The demeanor and the stance of the dog would command respect.

These dogs are good with children especially if raised with them since puppyhood. The Beauceron is a large breed, even a puppy can weigh up to 40 pounds. These big dogs can be overpowering to small children. These dogs would tolerate other pet dogs of the family but they can be very territorial and would be aggressive if exposed to other dogs.

Although the dog is mild tempered training is still necessary as these are herding dogs. Because of the herding instinct, the dog will attempt to herd any group of two or more- animals or humans. These dogs are obedient, they ardently wish to please the master. Training will not be a problem as these dogs are highly intelligent. However, training must be consistent and done in a positive manner. Harsh training would result to a dog with neurotic behavior. A properly socialized Beauceron will be well mannered in any normal situation, will tolerate other children and other pets.

These dogs dog would need space to run to burn off their energies. These are working dogs that are accustomed to roaming open spaces. Apartment living is not for this breed.

A Beauceron has a double coat that requires very little grooming. If the dog is allowed to roam outdoors, dirt may cling to the coat. In this case brushing the dog daily with a firm bristle brush would remove the dirt. However if the dog is kept indoors a once a week brushing will suffice. This dog is a light shedder. During shedding periods, the coat must be brushed more frequently to remove dead hair. This will also accelerate the shedding process.

This breed has dewclaws that must be checked every two weeks and trimmed if necessary. Clipping the dewclaws is not necessary if the dog is to be shown. Ears must be checked regularly to remove earwax build up. Ears may be cleaned with damp cotton.

The Beauceron is a very ancient breed. The breed enjoys tremendous popularity in France, even bagging the second most popular shepherd dog but it is relatively unknown outside its country of origin. This breed is a fairly newcomer in United States. Most Americans first saw the dog in the James Bond movie Moonraker. To an untutored eye, a Beauceron can be mistaken for a Doberman Pinscher or a German Shepherd. Only those familiar with the breed will know that it is a Beauceron, a very loyal dog that has a kind of psychic ability to foretell what the master wants and needs.

The Beauceron is a breed that was developed in the plains around Paris known as La Beauce where the name of the breed was taken. Shepherding dogs have existed in France even during the ancient times. These types of dogs are depicted in tapestries dating back to the 8th century. These dogs were mentioned in writings during the 12th to 16th centuries. The Beauceron was first mentioned in a 1587 renaissance manuscript. The Beauceron is believed to have descended form Chien des Tourbieres (Peat Dog), an ancient large breed of dog noted for its prowess in hunting stag, bear and wild boar. Existing documents verified the fact that these dogs existed during the Stone Age. Remains of these dogs were found in the lake dwelling in France and Switzerland.

During the early days French farmers are not concerned with the type of dogs. The working ability is given recognition. The Beauceron and the Berger de la Brie (Briard) may be different in appearance but they have the same working functions, that of a shepherd dog. Therefore they are lumped together under the general type of chien de la plaine or dog of the plain.

In 1863, a veterinarian named Pierre Megnin noticed the difference in the two breeds. He made a distinction by calling the shorthaired dogs the Beauceron and the long haired variety the Briard. In 1863 the Beauceron was included in the first French Canine Exposition which was held in Paris. Confusion over the separation of the two breeds still existed. The two breeds were finally divided in 1911 when a separate club for the Beauceron was created.

The ravages of the two World Wars tremendously decreased the number of the breed until only 50 specimens were left. These remaining dogs became the foundation of the revival of the breed.