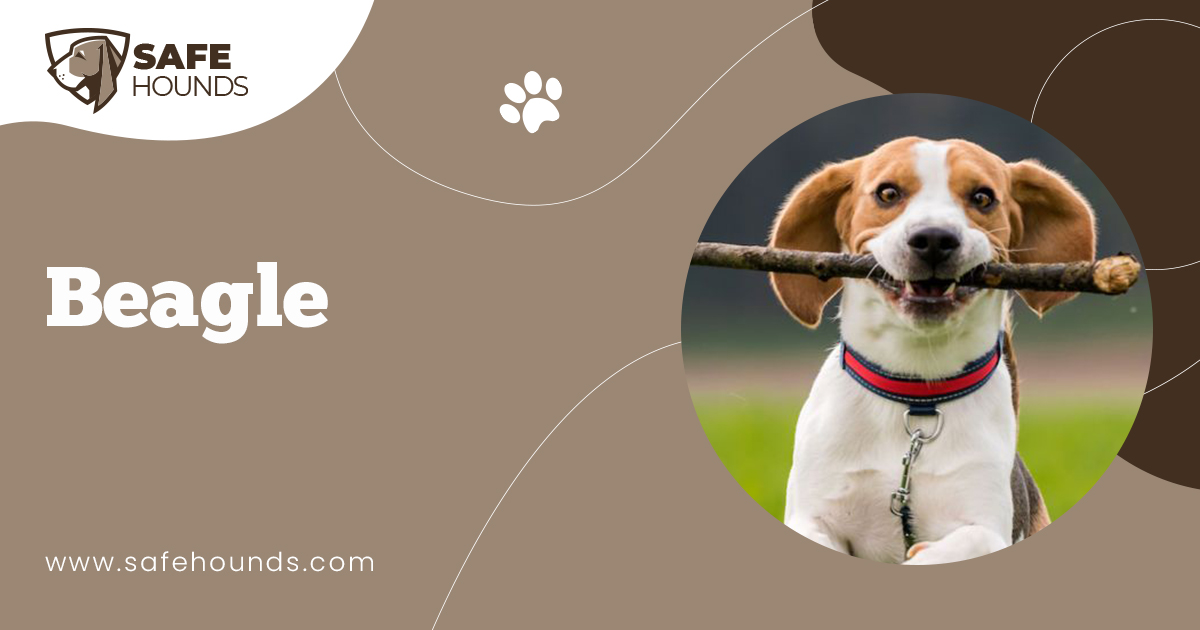 The Beagle is a hound breed that is strong, sturdy, and squarely built. He has a short top coat that is easy to maintain and is a very active dog. They have a very distinct bark or howl and it is especially prominent when he is on the hunt. The beagle is gentle, sweet, very lively and will play with anyone. He happily wags his tail when he sees people he knows but can bark at strangers if he is suspicious of them.

The beagle does well with other dogs and humans just make sure he is trained before letting him play with children, as he can bite when he is a puppy. They have minds of their own and need to be trained patiently and sternly when they are young, so that they do not get out of control. They do not like to be left alone and will howl until someone plays with them. If you are gone a lot, consider getting two. They are very social however, be careful about putting them around cats or other small household pets if they are not familiar with them from the time they are babies, as they might hurt them.

The beagle is determined and watchful and makes a great watchdog, but he can become stubborn at times if not trained correctly. They like to explore and sniff out new and interesting smells and may get lost or run away if not fenced in correctly. They easily wander when sniffing around so they need to have a close eye on them in places that are not gated. They are very active and energetic and are sweet, loveable dogs.

The beagle is a small sturdy hound that can be of any hound color including tri-color, black and tan, red and white, orange and white, or lemon and white. The coat is short, hard and shiny and requires only minimum maintenance. It is also sleek and hard and usually does not shed much. The beagle looks somewhat like a small English foxhound and has the same structure of build.

A beagles skull is broad and slightly rounded at the top and his head is proportionate to his body. His body is lean, muscular, and squarely built. His muzzle is straight and slightly square and his teeth are scissor-like with a harmful bite inside. His tip of his nose is black and he has large nostrils used for scenting, hunting, and sniffing things out.

The beagle has long straight and round ears that hang low and do not perk up. They are sweet and flap side to side when he shakes his tail. He has either brown or hazel eyes that always look like they have the pleading expression of play with me in them.

The tail is carried gaily and will swing from side to side when he is happy, but it will never curl upward towards the back. Male beagles can be anywhere from 14 to 16 inches tall. They are anywhere from 22-25 pounds. Female beagles range from 13 to 15 inches tall and weight between 20 and 23 pounds. They usually live between 12 and 15 years and have anywhere from 2 to 15 puppies, the average being 7. They are sweet, friendly and exciting dogs.

The beagle is a happy tail-wagging dog that likes excitement and interaction. They like to be played with constantly and if you will be gone a lot, consider getting more than one dog. They are fun and playful and are good watchdogs as well. Beagles need to get lots of exercise, but living in an apartment or with a small yard is fine as long as they can still run and play.

Beagles are conveniently small and sturdy and like to go outdoors and to exercise. He is mostly good-natured and enjoys the company of other people and dogs, and should be introduced when young to other small animals or cats before letting them play together.

Some concerns may be stubbornness, unstable temperaments and noise and health problems in the future. Beagles need proper training and extensive patience to be housebroken and to learn to calm down in times of excitement. Beagles are fun and like to bark and they have a long baying cry if left alone. They are usually energetic but can become serious or stubborn if they get angry.

Beagle care is easy as he has a short top coat. One problem might be shedding, so he does need to be brushed on a regular basis. Beagles are low-maintenance and easy to care for. He should get all of the required vaccinations when he is young and booster shots as needed throughout his lifetime. Beagles should be watched carefully for fleas and ticks and should be watched at all times, as they can create mischief and can run away if not fenced in.

Use treats as rewards when training beagles. They should be brushed several times a week, as they shed moderately. Use a fine bristled tick comb to remove excess dirt and hair if a normal brush does not work.

Beagles can be bathed infrequently, as they do not required too much maintenance and usually keep themselves clean. They need at least 30 to 60 minutes of exercise and play a day to make sure they do not become over weight or lazy. They are fun active exciting dogs and are great for families.

Learn what health problems are associated with this breed which includes hypothyroidism, cherry eye (swelling of the gland in the third eyelid), dry eye, back problems, epilepsy, glaucoma, cataracts, retinal dysphasia, progressive retinal atrophy, kidney failure, cancer and heart disease, and ask your veterinarian how to prevent these.

The beagle is considered one of the worlds oldest breeds in history and is one of the closest breeds to the hound. While the true origin of this breed is undiscovered, he became well known in the King Henry VII era because of King Henry VIIs daughter Elizabeth. In those days, it was usual that beagles were carried in hunting parties on the sides of horses. He is said to originate from France or ancient Greece but no one knows for sure.

They were primarily bred for rabbit hunting but have since then proved to be such a good hunter that he can capture all small upland game, including pheasant! English and American sportsmen still use them for hunting today.

Beagles are one of the most popular scent-hounds because of their uncanny ability to smell and their energetic go-getter attitudes. They are willing hunters and always have been. They can be used in packs, pairs or alone and do quite well together when hunting hare, pheasant or quail.

Beagles have also served as narcotics dogs and have done exceptionally well in that field as well. They have also proven to be fine family dogs. Unfortunately, they had been used for experimentation purposes in the past because of their small easy to use size. An unusual use of this dog is they are known for inspecting and finding termites with their keen sense of smell and wonderful detecting skills.

Beagles were introduced to the AKC in 1885. The National Beagle Club was formed in 1888, and the Breed Standard was accepted in the same year. They live a long life, are great fun, and will always be considered mans best friend.