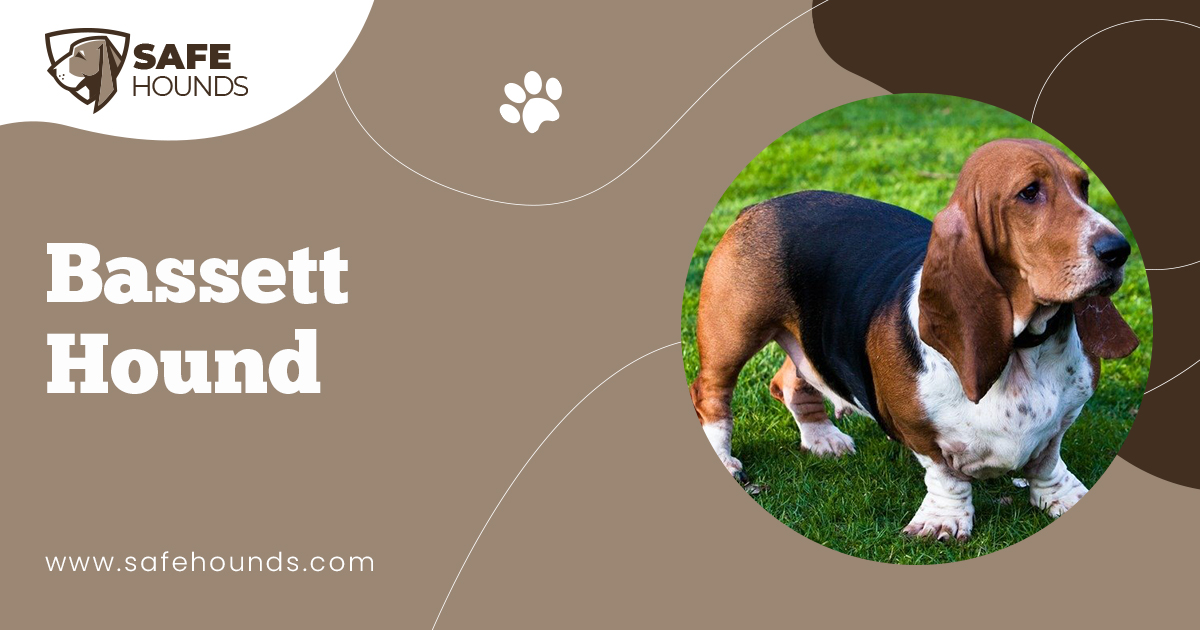 The Bassett Hound, originating from France, is known as the hush puppy dog. The name Bassett Hound comes from the French word bas meaning low. Bassett Hounds may have originated from genetic dwarf dogs but no one can be sure. The true fame of a Bassett Hound began in 1863 when he was presented to a dog show in Paris. Commonly known for his big, droopy ears, the Bassett Hound is a hunting dog but can also be considered a housedog.

The Bassett Hound is a sweet loveable dog that takes on the family role and loves all of his owners. He is a wonderful family dog and does well with children. Although the Bassett Hound is not sharp or vicious at any time, he is not timid and stands his ground if he must. He generally does not bite (some even say he is incapable of biting), but he may become a bit stubborn, especially if he is not trained young and correctly by his owner.

Bassett Hounds are sharp keen dog with a great sense of smell. They are obedient but sometimes ignore you if they have found a smell that is interesting to them. The Bassett Hound enjoys doing tricks for food, barking (deep and musical) and being affectionate.

A Bassett Hound can live in an apartment or house and gets exercise indoors and out. If he is let outdoors to run and play, he will go all day long if he gets the chance. They are natural hunters, like to be outside, and are used frequently for hunting rabbits. The Bassett Hound is sweet, laid back, conservative and affectionate.

The Bassett Hound is a long eared adorable creature. They have big brown eyes that are often said to look sad. They have very short stubby legs and are designed for rough terrain, as they are hunting dogs. He is heavy boned and thick bodied and not slim. The Bassett Hound ranges from 11 inches to 15 inches in height and weighs between 45 to 65 pounds.

Bassett Hounds do not have a particular color but usually come in mixed colors of brown, tan, black, and white. They have short hard and thick coats that rarely need to be brushed. They have a somewhat shiny coat and are sometimes wrinkly. Bassett Hounds have very long droopy ears, for which they are known by, and have a sad look in their eyes.

Their head is large and round and the skin is loose fitted and falls in wrinkles all over the face. They have large scissor-like teeth, but do not bite. He has big hindquarters and paws making him sturdy and set low to the ground.

Bassett Hounds have lots of extra skin and have very heavy and solid bones. He stands firmly and does not crouch or hover. He has a course tail and the only part of his skin that is not loose and elastic. The tail usually curves in an upward manner and swings gaily from side to side when excited or anxious.

The Bassett Hound is one of the most tame and sincere breeds of dogs. They are good-natured and get along with all other dogs and any human, including children. They are not easily trained but if you are persistent and train them correctly then they will learn to be good. They can be stubborn but usually listen to their owner unless they catch a whiff of an odor that catches their attention, then they are impossible to control.

Basset Hounds are intelligent free-thinking creatures that love their families very much. They are sociable with people and other animals and are affectionate and easy going.

Some problems you might run into with having a Bassett Hound are slobbering and drooling, howling, stubbornness, slowness, and flatulence. Other than that they are sweet wonderful pets and enjoy being with big families. They can live anywhere and do not need too much exercise.

Bassett Hounds need constant training for the first few years of their life to understand concepts. Once they learn this, they will always listen to their owner unless they smell something that interests them. Bassett Hounds need to be brushed regularly because they shed very easily and are very hairy animals.

Bassett Hounds need to exercise regularly, exercise is a must, or else they may become overly obese and cannot function regularly. They do not work well with joggers, as they are slower animals and cannot run high speeds because of the way they are built. Make sure to watch for ear and skin infections, as these are common with this breed.

Bassett Hounds are low-key and do not need any special attention other than the love of their owners. Make sure that Bassett hounds are kept regularly with more than one other person or animal. They like to be with many living things and like the idea of a pack or family.

Shakespeare describes the Bassett Hound in the following poetic image: Ears which sweep away the morning dew. He describes them just as they look, like long eared dogs with droopy eyes and a long body,

The Bassett Hound comes from the word bas meaning low structure or dwarf. The Bassett Hound started being used regularly for a household pet and for hunting in France in the late 1700s. It is believed that at about that time, George Washington was given a pair of two Bassett Hounds from Lafayette. Bassett Hounds were exported from France into England and America in the 1800s.

They were always used as hunting dogs and were wonderful at getting rabbit and other small game. Sir Everett Millais of England was considered the father of the breed because he was exceptionally good at breeding this type of dog.

In 1875, Bassett Hounds reached a level of familiarity with royalty and throughout England and America. In 1935, the Basset Hound Club of America was organized in the United States. He is still used for rabbit hunting in The United States of America and in England and France. The Bassett Hound has always been strong, affectionate and a great hunter.