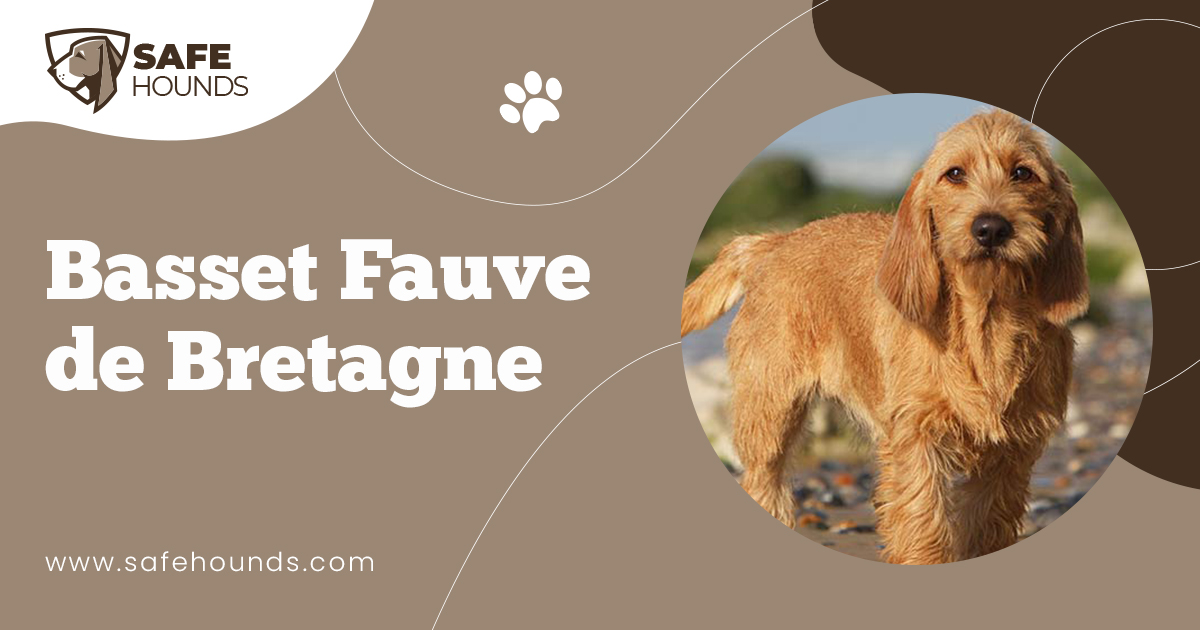 The Basset Fauve de Bretagne also known as the Tawny Brittany Basset is a big dog in a small jacket. Despite the size, the dog can easily scale fallen trees, weave in and out of thorny thicket in pursuit of prey. The small size is an advantage that enables the dog to enter the preys lair, a feat that can not be achieved by large hounds.

This dog originated from Brittany, France. Dog World has known three Fauve de Bretagne types – the Grand (now extinct) the Griffon and the Basset. The griffon is still in existence although considered to be rare. These dogs can not be found outside France. The Basset was once considered to be a rare breed. In 2007, the Basset Fauve de Bretagne was taken off the rare breed register of the Kennel Club as the dog is gaining popularity in Europe. Primarily bred to be a hunter, the dog retains its love for the chase but it has also evolved into a pampered dog show dogs. Sweden and USA have trained these dogs to be outstanding Search and Rescue dogs. In UK, the Tawny Brittany Bassets are excellent therapy dogs. Although hunting is the dogs true vocation, these dogs compete and do extremely well in obedience trials.

The Basset Fauve de Bretagne has evolved into affectionate and fun loving family companion. Generally, these are sweet natured pets that respond to training very well. This dog is an excellent choice for an owner who is gone all day and would only have time for the dog after work. The dog would be contented to lie by the fire all day and would snap in attention, alert and ready for a stroll once the owner arrives home. Moreover, this dog is not a picky eater, one that would eat anything given to him.

These dogs though are hounds and stubbornness is an inherent nature. Recall commands may have been introduced while the pet is still a puppy but in most cases, the dog will play deaf especially if it has found an interesting scent.

Bassets are short legged dogs with long bodies. Most Bassets have bodies that are twice longer that the height measured from the shoulders. The long trailing ears are another distinct feature of a Basset. The Basset Fauve de Bretagnes ears however may reach the tip of the nose but would not trail on the ground. Ears that are attached in line with the eyes are distinctively pleated at the base, with a pointed tip and covered by smooth hair that is finer and darker colored than that of the dogs coat. Moreover, by French standard this Basset is considered to have the shortest back. The dog does not have the exaggeratedly long body typical of a basset.

The hair and the coat color distinguished the Basset Fauve de Bretagne from any other French Bassets. The dog has a beautiful fawn colored coat that can come in shades of red brick to golden wheaten. The rather short rough and dense coat lies flat against the Bassets body. The wiry coat should never be plucked so as not to destroy the texture as well as the coat color.

The dog has a slightly long skull with a stop that is more prominent than that of the Griffon Fauve de Bretagne. The muzzle slightly tapers to a brown or black nose with well opened nostrils. Lips furnished with little moustache well covers the lower jaw. Strong teeth meet in a lever or scissor bite. Dark brown eyes have a lively and cheerful expression. Medium length tail is thick at the base and tapers at the end. When the dog is on the move, the tail is carried over the topline in sickle fashion and wagged from side to side gaily.

The Basset Fauve de Bretagne is a dog with a cheerful personality and known to be very affectionate to the human family. This breed makes wonderful pets as they are gentle with children. These dogs would demand human companionship. Include the pet in the family activities as much as possible. This will prevent the dog from being bored and destructive.

A Basset Fauve de Bretagne has an average trainability. It would not be uncommon to see this dog turn a deaf ear. These dogs were bred to be independent thinkers. Training the dog can be a challenge given that the dog has the inherent stubbornness of a hound. Training must be done in a firm, consistent but kindly manner. The dog should recognize the owner as the alpha male and that he (the dog) is the lowest rank in the pack.

Accustomed to working in a pack, the dog would tolerate other dogs. This dog has a strong prey drive. Scenting, trailing and flushing prey is an inherent trait. Proper socialization is imperative to avoid irate neighbors. The dog will chase not only small game but also the neighbors smaller pets. The yard or the garden the dog can access should be well secured with a fence.

These breed was developed to hunt. They have the stamina to hunt all day. The breed would need considerable exercise requirements. Being relatively inactive indoors, the dog can live in an apartment provided it is taken on long walks everyday. The most suitable living arrangement however, is one in the rural area with a fenced in yard where the dog can be let off leash to explore at his own pace.

The coat of the dog tolerates extreme weather condition. Brushing and combing would remove dirt and maintain its good condition. The dog though has a wiry coat that needs to be plucked twice a year. This type of hair should never be trimmed as it would destroy the texture and the color of the coat.

This dog like any other bassets has unusually shaped ears that need to be regularly groomed. Ears must be cleaned once a week. Excess hair inside the ears must also be removed.

Four varieties of large hound existed in France during the 16th century. These breeds were distinguished by the texture and coat color. White coat for the du Roil, de Bretagne are fawn and the black and the grey du St. Louis. Present day varieties of French hounds were developed from the repeated crossing of these four types.

The Grand Fauves de Bretagne is really a very large hound that measures from 70 to 74 cm at the shoulder. This dog has an outstanding scenting ability, active and fiery even at the start of a hunt. These dogs are highly resistance to extreme weather conditions and have the ability to excellently hunt wild boar and other large game in the thorny copse of North West France. This dog was dubbed as the Fawn Hound of Brittany. Unfortunately, this breed is now extinct though the Griffon Fauve de Bretagne as well as the Basset Fauve de Bretagne have stemmed from this noble hunting breed.

The Basset Fauve de Bretagne is a wiry coated short legged dog that measures from 13 to 15 inches. This breed, although small has taken the courage, the excellent scenting ability, the outstanding hunting prowess not to mention the mild temperament of its ancestor, the Grand Fauves de Bretagne. The height of the Basset is about one half of the Grands and speculations have surfaced on how the size reduction was achieved. One theory states that size reduction was attained by selecting undersized specimens and over countless crossbreeding the reduction in size was accomplished. So why would early days dog enthusiasts want a smaller hunting dog?

Before the French Revolution, the hunting sport is reserved only for the aristocracy. This means that only the aristocracy can keep and raise hounds. Francis 1, the Duke of Brittany who was crowned King of France in 1515 and ruled until 1547, was known to be an avid hunter. On horse back he hunted with a pack of Breton hounds. This hunting privilege for the aristocracy was abolished in 1789. The common people can now hunt and keep hunting dogs. Another problem though had surfaced. These people have to hunt on foot as most do hot own horses. These hunters can not keep up with the large fast moving hunting dogs. The development of the Basset Fauve de Bretagne and any other French bassets was borne out of the necessity for a smaller dog with a slower pace.

Hunting packs made up of Basset Fauves is very common during the early part of the 19th century. These dwarfed specimens of the Grand have proven to excel not only in the field of hunting but also as home companions. A rumor circulated that the breed was wiped out during the Ward War 11. However, this was refuted by the Club du Fauve de Bretagne. The breed has never been extinct and continued to be popular among huntsmen in the West of France.

The Basset Fauve de Bretagne is a versatile little dog, one that can lie placidly in front of the fire and be the ideal home companion but one that would be alert once called to hunt with the master.