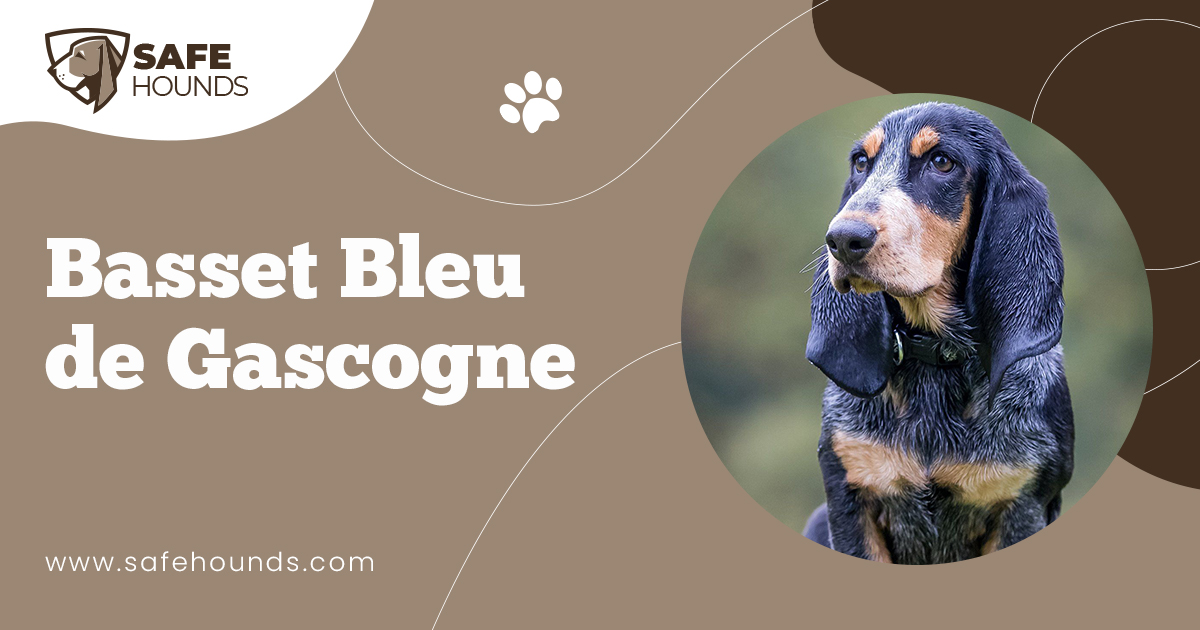 Basset is from old French word bas(se) that literally means low or short. When you hear the word basset hound, the overweight dog in a shoe advertisement would come to mind. The basset hound in that commercial gives the impression of being a languid couch potato. This is far from the true characteristic of a basset hound.

A Basset Bleu de Gascogne is a hound type, long backed and short legged breed of dog that originates from Gascony, an area in the southwest part of France. Far from being an indolent breed of dog, the Basset Bleu de Gascogne is an active and agile dog that is known for its prowess in hunting hare and rabbits. The dog is low slung and made distinct from other breeds by its long ears. These features of the breed have a purpose. The dwarfed short legs slow the pace of the dog so that hunters on foot can easily follow the hounds, the low slung body enables the hound to enter the preys lair and to follow the prey under thick vegetation. The Basset Bleu de Gascogne already has a keen olfactory sense but the long ears are very valuable when the dog is hunting as it stirs up the scent of the prey. The mottled blue color of the coat was developed so that the dog can bear up to the bright sunlight of the Gascony region.

These features make the dog an excellent hunter. The Gascony Basset has a beautiful howling voice. The dog is an obsessive hunter, once a scent is located it will let loose a deep throated howl to warn the hunter.

Recent times have changed peoples interest and fascination for hunting. These dogs were primarily developed to hunt. As the popularity of hunting decreased the need for these dogs conversely declined. The Basset Bleu de Gascogne however has an affectionate and happy nature. The dog is an extraordinary hunter but it also makes a wonderful pet, a pet that will give the family hours of fun.

The brown deep set and oval shaped eyes of the Basset Bleu de Gascogne has a melancholy expression. This belies the active and lively nature of the dog. This breed is an excellent hunter but no one can doubt the fact that it is also a desirable addition to the family.

The dog is really a living stuffed toy with its longer that tall body that is well supported by muscled thighs and well boned strong front and hind legs. The dogs muzzle is of the same length as the skull, strong with a nasal bridge that arches a bit. The very prominent nose is black with well opened nostrils. The dog has drooping lips that covers the lower jaw. Lean cheeks may show a fold or two. The long ears that go beyond the point of the nose are set well below the level of the eyes. Ears have pointed tips and curls at the side of the face. Strong tail with longer and coarser hair at the tip is carried saber like when the dog is alert or moving but hangs down with just the tip touching the ground when the dog is relaxed or at rest.

A Basset Bleu de Gascogne grows a short thick hair. This dog is predominantly white with heavy ticking giving a blue mottled effect. Most dogs have black patches on either side of the head that cover the eyes and the ears. The dog has tan markings above the eyes. The cheeks, the inner side of the ears, the legs as well as the tail can have tan markings too.

The Basset Bleu de Gascogne shows its extraordinary talent in locating a scent and trailing a prey. When the interest for hunting waned, the dog has evolved into a lively and affectionate home companion. The dog is friendly and has a mild and easy going temperament that makes it a most suitable playmate and companion of children. Used to hunting in packs, the dog gets along well with other animals too.

Being highly intelligent the breed will be easy to train. Obedience training though must be done in a firm but gentle manner. These dogs just like any other breeds are known to responds well to positive encouragement. The more the dog is yelled at the more it gets stubborn and obstinate.

These dogs are relatively inactive indoor. They would adapt well to living in an apartment. However, being active hunting dogs that are used to day long hunting, the dog would need vigorous exercise. Long walks twice a day would at least replicate the hunting activity. But be forewarned, the dog is first and foremost a scenthound. For the dogs safety ensure that the Basset is kept leashed if walked in an unfenced area. The dog may sprint once it locates an interesting smell. Calling the Basset to return would be a challenge.

No trimming, stripping or fussy care and maintenance for this breed. The Basset Bleu de Gascogne is a very easy dog to maintain not only because of the rather diminutive size of the dog but because it has a coat that relatively takes care of itself. Because the coat is short and smooth, it naturally repels dirt. A once a week brushing would remove dead hair.

This breed is prone to ear infection. Ears therefore must be regularly checked and cleaned. Hunting dog would not need nail cutting as the nail are naturally shortened when the dog runs on hard and rocky surfaces. Nails of homebound dogs however, must be regularly clipped.

The Basset Bleu de Gascogne is a very ancient breed. These dogs appeared in antique pictures circa 14th century in Gascony, an area southwest of France close to the Spanish border and the Pyrenees Mountains. It was believed that this breed has directly evolved from the Grand Blue de Gascogne. The Basset is the dwarfed version of the grand, both have the same aristocratic features.

The grand Bleu de Gascogne is a large hound known for it excellent ability to hunt deer, wolves and wild boars. How the Basset Blue de Gascogne was developed is a matter of debate up to this very day. One theory is that the Grand Bleu was mated with the Saintongeois Basset. Some speculated that the Blue Gascony Basset is the result of a natural mutation of the Grand and that the selective breeding has an objective of creating short legged dog for the prime purpose of slowing down the gait of the breed.

During the ancient times in France, hunting was a sports reserved only for the nobles. Common people were not allowed to take part in a hunt. After the French Revolution, this discrimination has changed. Ordinary people were now allowed to hunt. Noblemen used horses to hunt. Common people do not own horses and most would hunt on foot. Keeping up with the large hunting dogs became a problem. Ordinary citizens need a smaller dog that they can easily follow. And the Basset Bleu de Gascogne was born!

This breed went nearly extinct in the early 1800 when the popularity of hunting declined. Fortunately the breed was revived by Alain Bourbon. This breed gained recognition from the United Kennel Club in January 1991. Today the breed is safe from extinction but it is still an unknown breed outside of France.