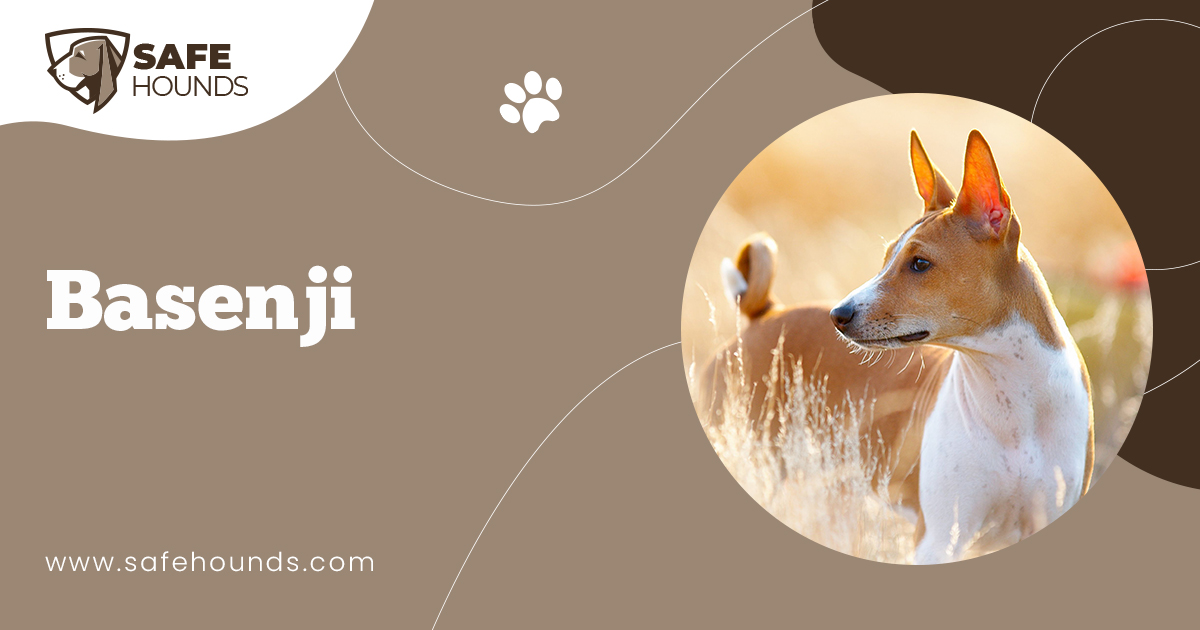 The basenji is a small little dog originating from Africa. They earned their name, long after discovered, in the 1930s. The name basenji translated in English means bush thing, and translated in Swahili the name means name means wild and violent. The Basenji is a handsome, thin, and muscular dog, who is also known as the African Barkless Dog. They should not bark often, but they are not completely mute. Basenjis repertoire of sounds range from a pleasing throaty crow to a keening wail made when they are lonely or unhappy.

The Basenji is one of the oldest breeds of dogs originating from Africa and used to help their owners with daily chores and obstacles. Basenjis make very good pets as long as they are handled and dealt with from an early age. Their short coats help to keep them cool when in the heat and were a great help to keep them from getting too hot in their original country, Africa.

Basenjis are alert, and very active. They can climb fences and chew a lot, requiring chew toys from owners to make sure they do not chew their possessions. The basenji is somewhat aloof but he is extremely intelligent. They should not be trusted with non-canine pets and is best if placed in a family with patient, older children. The basenji should be trained from an early age and can become elegant and athletic very easily. If not properly taken care of and exercised enough he may become fat and lazy. They are commonly compared to cats because of their mannerisms.

The Basenji typically weighs around 20 to 24 pounds (9 to 11 kg) and stands about 17 inches (43 cm) tall at the withers. They are athletic and deceptively powerful for their size. The basenji is graceful, confident, and elegant looking.

He has short hair with erect ears and a small tail that tightly curls to one side. They are commonly compared to a miniature deer (they are about the size of a fox) and have small graceful looking necks. The Basenjis forehead is wrinkled and is most wrinkled when they are young. They have almond-shaped eyes and look as though they are always squinting them. The basenji comes in many colors: copper, red, black and tan, black and brindle. He usually has white feet and white on the chest and tip of the tail. May also have a white facial blaze, white legs and/or a white collar, but those characteristics are only common in some basenjis.

The basenji is a light shedder, thankfully to his short, smooth, and silky coat, which is good for people who have allergies. Their ears are very important as they raise them to help find prey in bushes and act as heat dissipaters to keep them cool. His short coat is unique in that it has no odor at all, and he keeps it spotless by cleaning it himself in a cat-like manner, without being bathed for months at a time. He is fast and muscular and can leap very high when it comes to exercise and climbing. He is unique and is a wonderful candidate for dog shows, given that he is always fit and clean.

Although the Basenji is a loving dog, true to their owners and a great playmate with other dogs of his same breed, he is a very proud dog as well. He strongly believes in personal and property rights and does not bow or respond to anyone unless he also thinks they are right. He can be stubborn but he is usually a quite and satisfied dog.

Being a silent hunter also helps with being a silent watchdog. He will give an intruder a very hard time if he is caught during the night and will try to notify the owner, but usually will still not bark. He likes to roughhouse and race around with either his owners or other dogs. Owners will testify to his unbelievable intelligence, his inventiveness, his curiosity, and his silly sense of humor.

The basenji is cat-like in many ways and even cleans himself with his paws. They are independent and self-motivated and like their space. They like to sit at their owners feet, just as they used to sit at pharaohs feet in ancient times.

If not supervised or trained correctly young enough, Basenjis may become bored and destructive or fat and lazy. The Basenji is happiest living with two or three of its own and they will not fight amongst each other. Basenjis require plenty of exercise and play.

Basenjis are easily kept, as they can go months without needing to bathe. They clean themselves cat-like with their paws and have a short odorless coat that stays impeccable for long amounts of time.

Basenjis are prone to an inheritable kidney disorder called Fanconi syndrome. They usually start showing symptoms around the age of four and owners can check to see if they have the disorder by testing their pee for extra sugar. In addition, Basenjis should also be checked for Hemolytic Anemia, which is also passed down by their ancestors. Most are clean from that disease today, but all should be tested before breeding and accidentally spreading the problem.

Daily exercise will help to prevent obesity and laziness in Basenjis. They are easily house trained because they are already very clean creatures, as they do not like mess or dirt. They have a strong dislike for water, so be extra careful when bathing them. The Basenji is very curious and may wander off if outside without a leash attached. Female Basenjis only have one season a year, which will last up to 30 days.

The Basenji is one of the oldest species of dogs alive today. They were said to be very similar to the dogs of the Stone Age, and according to paleontologists, there is evidence supposing that they were the Canis Palustrus of prehistoric times, meaning the dog of the marsh.

Originating from Africa, the Basenji is depicted on tombs of ancient Egyptians looking just as they do today, with their pricked ears and curling tight tails engraved into the stone. In ancient times, he was considered both a hunter and a house pet as well, always lying under the feet of Pharaohs. They are considered to be an ancient dog breed.

Only as recently as late 19th Century was the Basenji rediscovered in his original habitat, the headwaters of both the Nile and the Congo, in the heart of Africa. There, Basenjis are still the hunting dogs of native tribes, and so essential are they to the Pygmies that a wife can be purchased for much less than a Basenji.

English nobleman rediscovered these muscular dogs during their hunting expeditions. For fifty years, the British made many attempts to transport Basenjis to England, but they were not effectively familiarized there until 1937. At the same time, a pair was brought to America by animal importer Henry Trefflich.

The Basenji was first registered with the AKC in 1944. They are considered a Hound in class and in breed. The AKC studbook was reopened for a number of new imports in 1990 at the request of the Basenji Club of America.