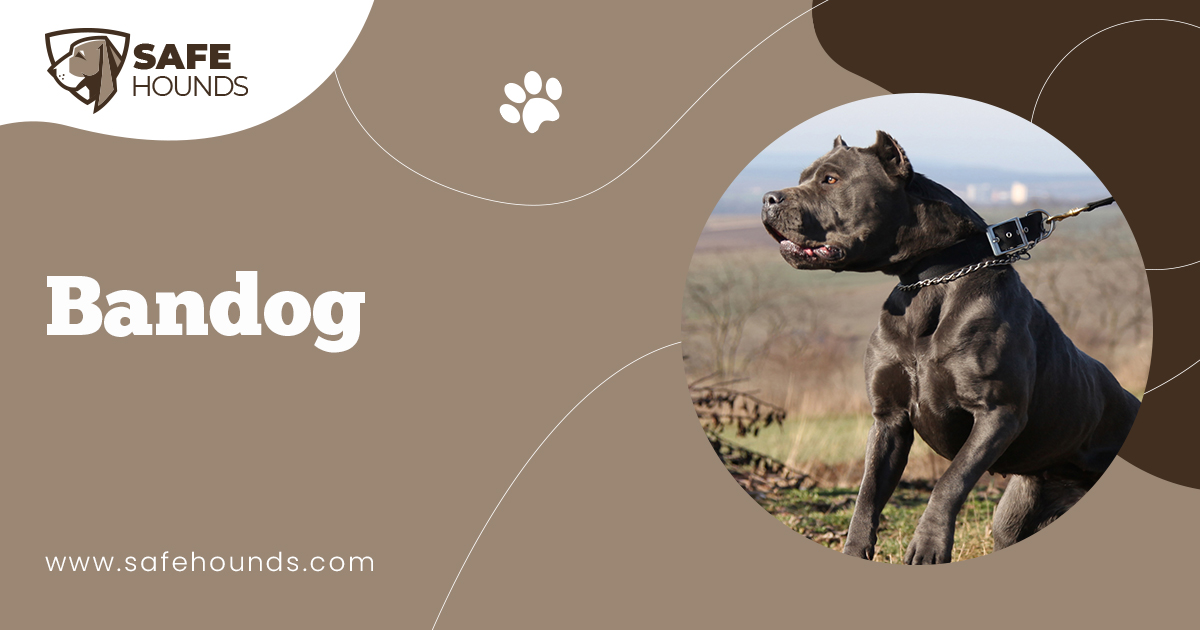 Legend has it that the Bandog is a spirit-like huge mastiff with powerful jaws from where fire is spewed out. The dog is supposedly guarding treasures buried under the Rock of Dunamase in King Leinsters stronghold in Ireland. Bandogs of old are giant sized working dogs used by semi-nomadic hunter gatherers. Throughout the centuries these dogs were utilized to hunt large game and to guard settlements. Progressive natural process of breeding developed less heavy but more athletic dogs that are more capable of performing a variety of tasks. Bandogs are medium to giant sized working dogs. This type of mastiff belongs to the rare dog breed category. A Bandog is a massive dog with a rectangular shaped body. This dog type would win no beauty contest but what it lacks in personable appearance is more than made up by its utilization. When William Harrison described England in 1586, he made mention of these dogs. The Bandogs were described as large and stubborn ugly dogs, burthenouse of body and noted for being a very ferocious animal.

The Bandog, also referred to as Bandogge is not a purebred dog in the sense that we understand the purebred word to be. The Bandog is not a very old dog just about 40years in existence. This type of exceptional guard dog is the gift of two notable breeders to the world of dog lovers. The dog is of mixed ancestry. The Bandog that exists today results from crossing American Pit Bull Terrier with Neopolitan Mastiff. The most common method of breeding this dog type was patterned after the breeding scheme of John Swinford and Joe Lucero. Strains of Bandog that were developed worldwide answers to a variety of names. Bandogs have proven their abilities in protecting its master and guarding the property against intruders. These massive ferocious dogs can be an intruders worst nightmare.

Being dogs that resulted from crossing different component breeds, a Bandog is expected to vary in weight, height and slightly in appearance. The dog may look like a compact mastiff or a giant American Pit Bull Terrier. The absence of a distinct standard is one of the reasons why this dog type is not recognized by major kennel clubs. Generally, these are massive dogs with a heavy rectangular shaped body. A male Bandog can weigh from 100 to 140 pounds and a females weight is from 85 pounds and up. From the aesthetic view, the dog type may not be perceived as appealing. The dog may even be unkindly described as ugly. However, this rugged well muscled and heavily boned breed has an overall well balanced appearance that exudes immense strength and endurance. This dog has a well proportioned and symmetrical body. A Bandog has a massive head and a strong skull. Depending on the strain, the dogs strong muzzle can be medium to long in length. A robust strong and muscular neck sits well on broad shoulders. The chest is powerful. The ears are commonly cropped. Tails may be docked though it is common to leave the tail in its natural state. Dark eyes are preferred although it is common for a Bandog to have an eye color that compliments the color of the coat. This dog type has a fine short to medium length hair that lies close to the body. Due to the mixed ancestry, a Bandog can have different coat colors. Brindle, sandy gray, yellowish, fawn, golden fawn, black and red are the most common coat colors.

The Bandog was specifically bred for protection work. These dogs have been proven to have a fearless and ferocious temperament. Some dogs are even used in illegal dog fighting activities. This serious worker will lay its life on the line to protect the master or to safeguard the property from threats of wrongdoers. A Bandog is basically a calm dog but it would instantly turn into an aggressive ferocious dog when provoked or when it perceives a threat to the family. This dog is not a barker. Intruders will not be forewarned by the dogs bark the dog will immediately pounce. This dog type is known to have an even temperament that makes it an outstanding home companion. The dog may have an intimidating appearance but this dog is loyal, devoted and has a lot of love to give. It is kind of surprising how these giants can be gentle to the children and how they can tolerate other pets of the family. A Bandog though would need socialization as they have the tendency to be aggressive to other dogs. This dog is not a good choice for a first time dog owner as it has the tendency to take advantage of the passive owners. A potential owner should have what it takes to be the dogs pack leader and to manifest authority over the dog. These dogs make affectionate pets that are always eager to please their masters.

Bandogs are working dogs. They can live in apartments as although massive in size the dog is relatively inactive indoors. Because this breed loves to be with it master, it is not advisable to keep the dog in a kennel outdoors. The dog is not a barker but it is known to howl when separated from the family. A Bandog has high exercise requirements. The owner must ensure that the dog is taken for long walks everyday. These large dogs are low on maintenance. Being short haired, the dog would be easy to groom. This is an average shedder. Use a rubber brush to remove loose hair and a firm bristled brush to distribute the natural oils of the skin and to promote the excellent condition of the coat.

Bandog or Banddoge refers to large type of working dog. The name was derived from the Saxon word banda which means chain. These dogs that were speculated to have originated in Middle England in 1250 – 1300 were generally used as property protectors. The dog will be chained during the daytime and released at night to guard the property against intruders. These dogs were usually kept and utilized by British gamekeepers. Bandog of old is commonly referred to as Gamekeepers Night Dog. Apart from being a patrol companion, the dog was utilized as despatch dog. The dog would find wounded game so that gamekeepers can kill the animal saving it from undue suffering. Bandogs of old have the dangerous job of locating poachers. Finding an armed poacher oftentimes cost the dog its life as poachers usually kill the dog. During the 1820s caught poachers are punished by being shipped off to the American or to the Australian colonies.

The exact origin of the Bandog is unknown although it was generally believed that similar to other ancient dogs, the Bandog has descended from the wolves (Canis lupus) as well. It is possible that these huge ferocious dogs were developed from Bull Baiting Mastiffs and Guardian Mastiffs. It is also possible that these mastiffs were crossed with the war dogs used in the medieval battles of the Crusades. In 1576, Dr. Caius described the Bandog as a very functional type of dog that was used in hunting foxes and badgers and used to drive out wild swine from pastures. The dog is widely used in bull baiting where the dog takes the bull by the ears and hold tenaciously. In William Harrisons description of England during the year 1586, the Bandog was mentioned as a large ugly and stubborn dog that is more ferocious than any Archadian or Corsican cur.

Various crosses developed different types of dogs. Eastern breeds of mastiffs and shepherds were crossed with western breeds of bulldogs and hounds. Local bloodlines were also introduced to the gene pool thereby creating a dog without a distinct set type.

John Swinford, an American veterinarian began a breeding program in 1960s with the main objective of creating the ultimate protection dog. English Bullerriers and American Pit Bull Terrier were crossed with English Mastiffs and Neopolitan Mastiffs. The cross that is known as the Swinford Bandog is 50% American Pit Bull Terrier male and 50% Neopolitan Mastiff bitch. The breeding program did not produce the expected breed of superior property guardian but the Swinford program has inspired legions of breeders. Joe Lucero, a notable breeder of American Mastiff has played a major role in the development of the Bandog. The dog type that was developed under his breeding program is now called the American Bandog Mastiff.

The Bandog has spread all over the world. Modern Bandog breeds are in existence nowadays. From the Swinford invented recipe, the Australian Bandog, the Brazilian Bandog, the German Bandog, the Czech Bandog to name a few were developed. A well bred Bandog is expected to be a dependable protector of master and property. However, amateur and inexperienced breeders have taken to producing these dogs often resulting to dogs with unacceptable characteristics. Because the Bandog has no specific breed standard this dog type was not recognized by AKC. The Bandog is listed under Unrecognized and Rare Breeds.