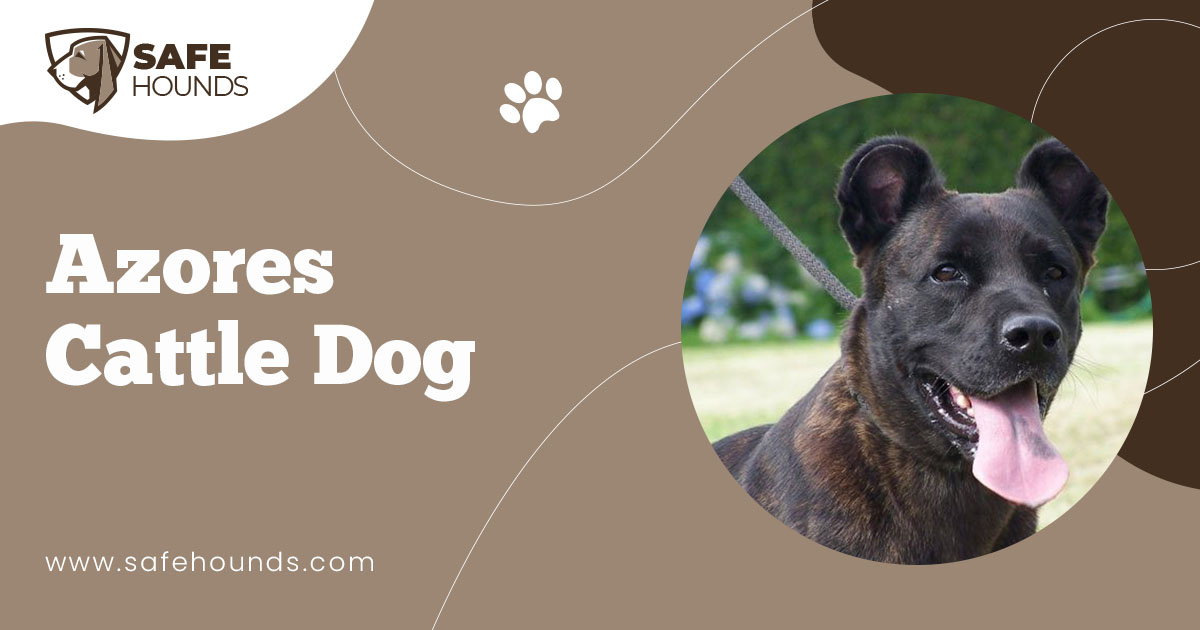 A medium sized rustic dog that has well muscled trunk and limbs that walks with a slight waddle is an Azores Cattle Dog. Dogs of this kind are usually seen in Azores, Portugal. The breed is otherwise known as the Cao Fila de Sao Miguel as the breed actually originated in Sao Miguel, the main and the largest island in Azores. Purity of this breed has been maintained for several hundreds of years. This is due to the remoteness of the island. Because very few Azores Cattle Dogs left the island, the breed is relatively unknown even in continental Portugal. Island people wanted to keep it that way. These people are proud of the dog which they consider as a part of their old culture and tradition. Breeders wanting to ensure the purity of the breed controlled the sale of the dogs.

An Azores Cattle Dog is a working breed. These dogs live to work and would hate to be kept just as a home companion. This breed has two main purposes in life – to herd and to guard. In fact these dogs that were born in the pasture are known to remain outdoors day and night for the whole year herding and guarding cattle as well as guarding agricultural tools and other properties of the master. These are extremely agile dogs that moves like lightning to catch and nip a bovine hamstring. The dog is intelligent, well aware that it would not do to injure the mammary glands of a milking cow and not to bite deeply so as not to wound the animal it is herding. However this dog would be aggressive when herding bad tempered animals. The dog would not hesitate to bite a stray harder to get it back to the herd.

As mentioned, this breed serves as guard dog too. And how they guard! The dog is courageous and extremely ferocious well able to guard the livestock from predators and from thieves. This dog would instantly obey the commands of the master but when it is guarding the herd and the property on its own, the dog would be very vigilant and would instinctively manifest its own will at the slightest sign of threat. Guarding and herding is inherent in these dogs. As the breed was kept pure no regression of this trait was seen. For this breed no training will be required as even puppies would manifest strong instinct to herd and to guard.

This is a medium sized breed but it is much larger than other breeds of cattle dogs. This dog has a solidly built body. The dogs dark brown eyes have an expressive, severe and intent gaze. The dogs serious expression coupled with the strong jaws, the black pigmented lips as well as the complete dentition that meet in a pincer or scissor bite would certainly deter an intruder. This dog would zealously guard the herd and anything that it considers under its protection. And when they do guard it would be dangerous for a stranger to approach the dog. Only the owner can command the dog to stop from being aggressive.

To a stranger or to an intruder the dog may appear to be frightening but the dog is actually a handsome one. The well built body and the streaked short haired coat that may come in different shades of gray, reddish and yellow as well as the white markings on the chest on the chin and on the feet makes the dog look impressive. An Azores Cattle Dog may not win a beauty contest but it is not an ugly dog either. What is more important is the fact the dog performs its functions perfectly.

The Azores Cattle Dog is an intelligent and obedient breed. The dog needs very little training to be able to learn the ropes of herding and guarding as even puppies will inherently know how to herd. These are aggressive dogs. This is why they make excellent guard dogs. But to the right owner this breed can become a loyal companion, one that will blindly follow the command of the master and one that will be content to live near the human family.

Obviously, this breed is not one for apartment living. The dog may be at ease to live near the master but the dogs living area would be in the yard and not inside the home. This breed is accustomed to living outdoors and would not appreciate to be cooped inside the house where it will not have the physical activities it is used to. This dog needs a lot of exercise and a job to perform.

This dog has a kind of wash and wear coat that does not need extensive maintenance. Brushing the coat a few times a week would be enough to promote its good condition. The Azores Cattle Dog is a hardy breed but being working dogs that spend their time outdoors, the dog is prone to cuts. Thorns and other foreign objects may get lodged between the toes and on the ears. The dog may not need extensive brushing but the ears and the feet must be regularly checked and cleaned.

An aggressive working dog known for its outstanding ability to herd and guard cattle exist in the remote isles of Portugal. This breed is referred to as the Azores Cattle Dog or the Cao de Fila de Sao Miguel, taking its name from Sao Miguel, the main and largest island of Azores. This breed is quite big as compared to other cattle dogs but the size is not an impediment as the dog is agile. An Azores Cattle Dog weaving in and out with lightning speed between the cattle is quite a sight. This dog would lightly nip the hamstring of the cattle avoiding the udder so as not to injure the milking cows. The Azores Cattle Dog is a suspicious guard dog. However, this is an intelligent breed as it can discern if a stranger is a threat to the livestock or to the property it is guarding.

The Azores Cattle Dog is believed to have existed for over 300 years. In 1427, the Azorean islands were discovered. The islands were hard to penetrate as they are covered by dense vegetation. To solve the problem cattle were brought by the sailors of Prince Henry. The cattle were left on the fringes of the islands. Because of the abundant vegetation, the cattle proliferated. By 1439, numerous herds of cattle ran wild in the Azores islands. A herding breed of dog was needed to control the herds. The breed that was initially used was called Cao de Fila de Sao Miguel. This breed is now extinct but the Fila and some molossers were believed to be the progenitor of the Azores Cattle Dog.

The Azores Cattle Dog has remained a pure breed for over 300 years as the islands have remained in relative isolation. When the islands were opened to the outer world, immigrants together with their foreign breeds of dogs gained entrance to the islands. Mr. Antonio Jose Amaral, considered as the father of the breed together with Mrs. Maria de Fatima Machado Mendez Cabral, a veterinarian initiated the registration of the breed in 1980s. The breed was officially approved and acknowledged by the Clube Portuguese de Canicultura in 1984. Nowadays, the Azores Cattle Dog is still considered to be a rare breed with only about 3000 dogs registered worldwide.