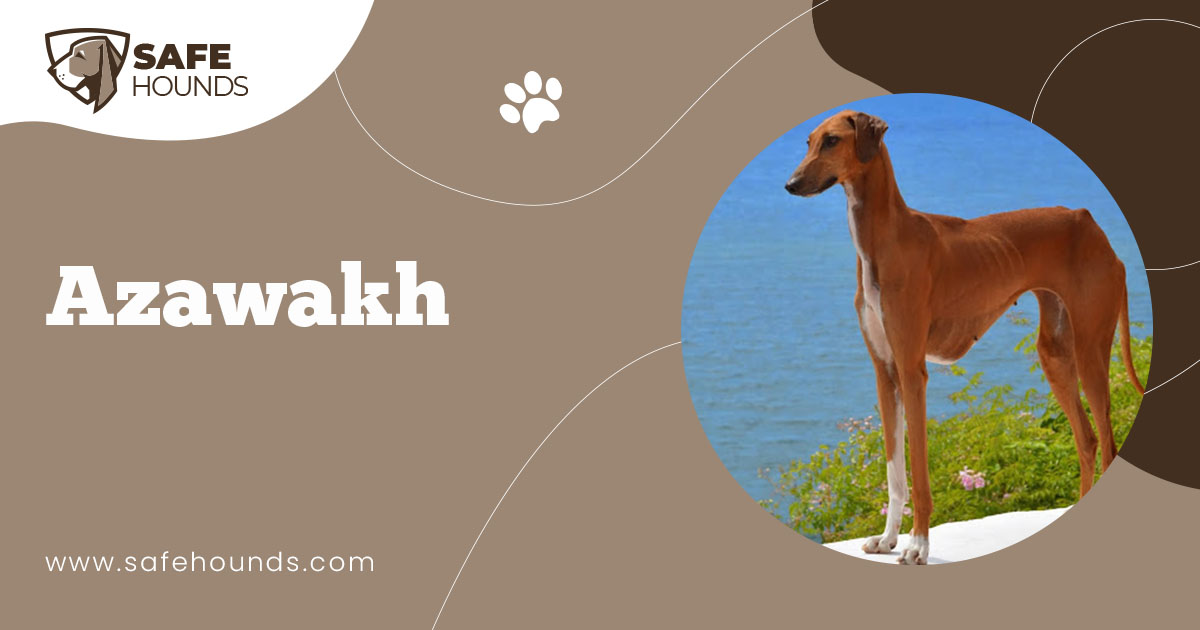 The Azawakh is an ancient breed of hunting dog that was said to have been developed by the masked and gowned nomadic people – the Tuareg of Mali. Tuareg people are considered to be the most independent feudal culture that still exists today. Tuareg male warriors cover their heads and faces and wear long gowns. Tuareg women however, contrary to the Muslin tradition do not cover their heads and faces with veils. Moreover, these Tuareg women hold a significant position in society. Tuareg nomads and their herds of camels, cattle and goats still roam the Sahara Desert and the Azawakh which they call I dii nilleli which means sighthound of the free people is an indispensable hunting dog. Up to this day, Azawak can be seen guarding Tuareg camps, hunting wild boar, hare and antelope.

A hound moving and gliding swiftly with the least effort, nose up in the air, giving a haughty expression that seems to proclaim its superiority that is an Azawakh, a dog whose physical and mental traits were honed to perfection by the harsh and severe desert environment. A dog of exotic beauty that served three distinct functions: defender, hunter and status symbol. An azawak would howl and growl to warn the camp of intruders and would guard the stock against predators. Azawakhs are swift and efficient hunters. Although highly functional, this breed of dog is owned by the Tuareg nobility as a sign of status symbol.

An Azawakh is an awe inspiring sight with its clearly apparent bones, muscles, sinews and veins. Legs of this breed would seem to be endless giving the appearance of fragility but one should not be deceived as these very long legs can easily outrun and corner a prey. The impressive eyes would show that this breed is highly intelligent.

An Azawakh bitch is known to have one mating period every year and would accept a sire on the 14th and 20th day. After 60 days of gestation, the bitch gives birth to a litter of 4 to 8 puppies. The bitch will nurse the puppies for 4 to 5 weeks after which she will refuse to let them suckle and instead would regurgitate eaten food to feed them.

Azawakh dogs are 25 to 29 inches from the withers and bitches are 23 to 27 inches with an average weight of 35 to 55 lbs. Due to its natural habitat an Azawakh gives the impression of being extremely thin as the wiry and flat muscles, the bones, the veins and the sinews that are tightly covered with thin skin is very apparent. The skin is covered with very short and extremely soft hair. The chest as well as the belly is at times hairless. Coat colors would range from dark sand, fawn to light sable with flecking at the extremities. The coat would have a white bib and a spot of white on the tail. Each of the four limbs would have a white stocking. The head would be narrow and long. The almost flat skull would feature a less discernible brow and stop. Some dog would have a white or a black mask. The slender jaw can be deceiving as it strong and can easily corner and kill its prey. The tapering muzzle would be half of the length of the head and the nose is either black or brown. A significant trademark of this breed is the swelling on the side of the dogs face.

The broad based pendant ears that droop close to the skull would instantly pick up when danger or intruders are sensed. This dog breed has a deep and narrow well developed chest and a high stomach that gives the dog its lean appearance. The hipbones are clearly evident as they are higher than the withers. The long thin tail is covered by the same colored hair as the body.

An Azawakh hound is first and foremost a hunter and a protector. Although breed, educated and socialized while young, these dogs will still manifest its aloof and haughty personality. The dog will be reserve and suspicious of strangers and would be aggressive if the camp and the people he is guarding are threatened. These dogs are not really a pet dog but affection for the master can be formed. In such instances, these dogs will be fiercely loyal, would be very loving to the children and will become a friend of the family.

Azawak hounds will always be independent and at times obstinate. The dog would be the one to decide who can and who cant pet him. Also, some dog owners find it hard to make the dog come in or go out. It would be pretty hard to physically restrain the dog but it is possible to persuade and coach the dog with a firm voice. This is why Azawakh hounds need to be trained and socialized when young.

An azawak will do fine in an apartment as they are known to be relatively inactive indoors. A house with a yard though would be more suitable as the dog would need opportunities to run freely. Daily long walks would release the pent up energy of the dog. Having originated from the harsh climate of the Sahara, these dogs can be extremely sensitive to cold climate. It is advisable to let the dog indoors during cold weather. These dogs can tolerate the cold weather if they are made to wear coats or sweaters.

Azawakh owners may be mystified by the cleaning habits of their dog as unlike other breeds these dogs are comparable to cats when it comes to their cleaning tendencies. Similar to cats, these dogs would lick and lick to keep their furs smooth and clean.

The short smooth coat would be easy to groom. A weekly brushing using a slicker rubber brush would be enough to remove dead hair. During shedding season it is recommended to brush and dry shampoo the dog more often.

Azawakhs do not have the doggy smell therefore frequent bathing is not necessary. If the dog gets muddy, just wait for the mud to dry and then brush it off. Teeth may have to be cleaned especially if the dog is fed with kibble. If the dog is on a natural diet with raw meat and bones, then teeth cleaning would not be necessary. Puppies nails should be clipped weekly starting from two weeks after birth. Nails of mature dogs should be clipped regularly. A rule of thumb is when the nails click when the dog walks, the nail needs cutting. Overgrown nails can make walking uncomfortable and may cause the dog to develop arthritis.

The Azawakh hound originated from the Niger, Burkina Faso and Mali. Raised and breed in the Sahel areas of the Sahara Desert, this sighthound took its name for the Azawakh (Land of the North) Valley. Wolves are believed to be the descendants of dogs. However, there is another belief that Azawak are descendants of different line of dogs that are considered to be as old as the wolves. This theory was supported by the distinct morphology, the heart volume, the higher rate of red blood cells, as well as the annual mating period.

The Azawakh, similar to the Sloughi and the Afghan hound are of oriental origin that has lived for thousand of years with the nomadic tribes of Tuaregs and their slaves. The Tuaregs have migrated from Asia to Sahel, an area in the southern part of Sahara Desert. Tuaregh Imuchagh are responsible for breeding these hounds that served as the protector of their cattle, as watchdog that protect the community and the camps against intruders. These hounds are also used by the nomadic Tuareg tribes as excellent hunters.

In the early 1970s, Dr. Pecar, a Yugoslavian diplomat that was stationed in Burkina Faso was fascinated by the physique and notable characteristics of the Azawakh hound. The hound however, can not be bought. A nomad gifted him with a male. He was able to take home a bitch when he bartered his service by killing a bull elephant that was terrorizing the tribe and destroying the village. French military servicemen and civil servants brought the Azawakh hounds to France. Azawakh was introduced to America in the mid 1980s and on January 1, 1981, the Azawakh hound was accepted as a bona fide breed. FCI removed the word Sloughi and in 1986, the Azawakh was finally recognized in the world of dog lovers and breeders.