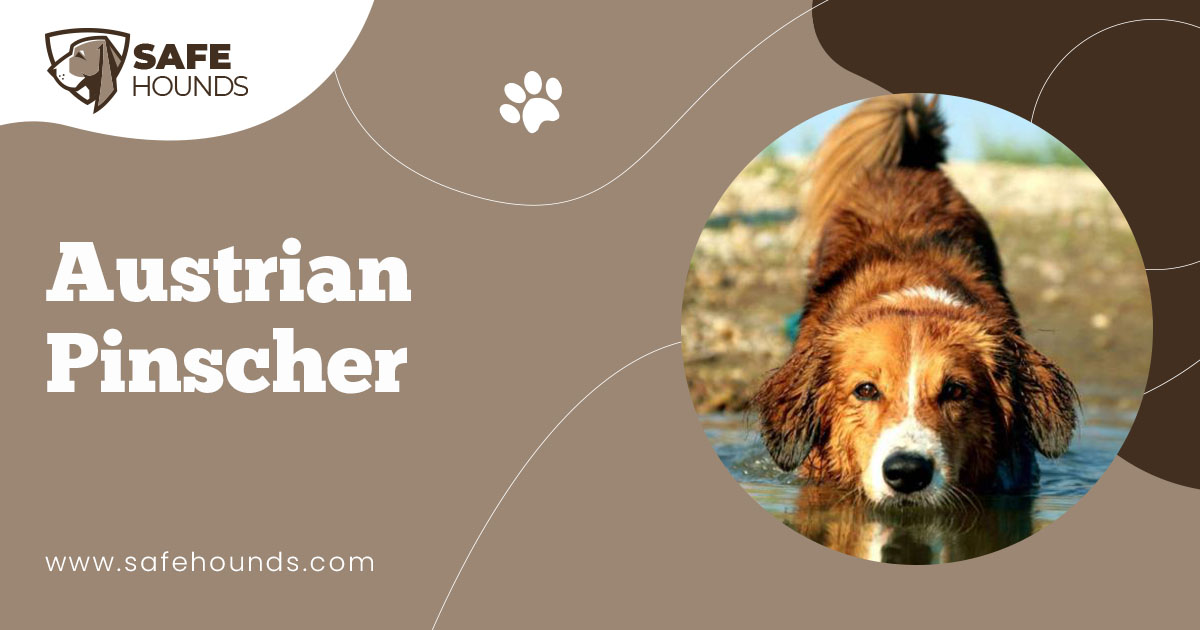 The Austrian Pinscher is a breed of dog that was speculated to have descended from the ancient Austrian dogs. In 1928 this breed was given the name Osterreichischer Kurzhaarpinscher or Austrian Shorthaired Pinscher which was changed to Osterreichiscer Pinscher (Austrian Pinscher) in the year 2000. The Austrian Pinscher is a versatile farm dog. This breed was originally used as livestock drovers and guardians. This pinscher type breed is an excellent ratter that rids barns and homes of rats and other types of vermin. This is a breed that takes it work seriously but it is also noted to have a playful and lively personality. When the need for livestock guardians declined, these dogs have found another job that of being the affectionate and loyal family companions. This good natured dog is known to form a strong bond with its family. The protective nature makes this breed an excellent watchdog. This breed is a barker. The dog may not have the intimidating appearance of a bulldog but its resounding bark would be enough to intimidate intruders. This fearless dog would bark at the slightest suspicious sound. These dogs also have the propensity to bite. Obedience training and extensive socialization is a must for this breed and both must be started as early as possible. This dog is relaxed when in the company of its people but they can be a bit high strung when faced with unfamiliar people and situations. Socialization will develop the dog into a well behaved individual. This is an intelligent breed and they will learn quickly if the training is conducted in a firm but positive manner. The Austrian Pinscher is a fairly healthy breed although the breed is known to have a hereditary heart condition. This breed has a life expectancy of approximately 12 to 14 years.

The Austrian Pinscher is a versatile medium sized farm dog. This sturdy Austrian farmers dog has a proportioned strong body. This breed has a pear shaped head. The broad and rounded skull has distinctly developed zygomatic arches. The strong muzzle is slightly shorter than the skull and noted to have a straight nasal bridge. Tight smooth lips have dark pigmentation. White evenly spaced teeth meet in a scissor bite. This breed has a black nose and small high set button ears. Large round eyes have close fitting darkly pigmented rim.

The Austrian Pinscher is a working dog. It is expected to have a well proportioned strong body. This breed has a medium length strong neck and well defined withers. The back is rather short but it is broad and straight. The loin is broad and short as well. This breed has well developed forechest, a broad and deep barrel shaped chest and a slightly tucked up belly. Medium length high set tail is densely covered with hair. The tail is usually held high giving the dog an alert and a lively demeanor. An Austrian Pinscher has strong boned limbs. The forequarters are straight, the well angulated hind quarters have broad upper thighs, strong hocks and short pasterns. Close knit feet have well arched toes and strong nails. The tight fitting skin is covered with a thick double coat. The thick, short to medium long outer coat is smooth and close fitting. This bred has a short but thick undercoat. An Austrian Pinschers coat can be brindle, black, brown, red and fawn. Some individuals have black and tan coats. Others have white markings on the muzzle, throat, nape, neck, on the feet and on the tip of the tail.

An Austrian Pinscher is a farm dog. This breed loves working and they take their jobs seriously. These dogs though make a wonderful companion as they form a strong attachment to the family. These dogs are loyal, affectionate and very protective. An Austrian Pinscher exhibits its gentle and playful temperament when in the company of children. The dogs alert and protective nature is what makes this breed ideal watch dogs. This dog is usually calm when in the company of its people but this breed has a rather high strung temperament. An Austrian Pinscher is noted for its spirited bark that intimidated intruders. The propensity to bark and the energetic nature of the breed is what makes it unsuitable for apartment dwelling. This is a dog-aggressive breed. This breed has a low bite threshold. An Austrian Pinscher would need socialization and obedience training to tone down this unacceptable behavior.

Austrian Pinchers are bred and developed to be farm dogs, they are accustomed to having a task to do. Dogs that are kept solely as pets must be given opportunities to exercise. These dogs would appreciate being allowed to play catch ball or Frisbees with the children or being taken for long walks everyday. The Austrian Pinscher does not need an extensive grooming routine. Being a short coated dog, brushing the coat twice a week would be enough to distribute the natural oils of the skin and to maintain the good condition of the coat. This dog must be bathed only when necessary.

The Austrian Pinscher (Osterreichischer Pinscher) is believed to have descended from the ancient pinscher type dogs in Austria. This type of dog is widespread in this landlocked country in Central Europe as these ancient dogs were noted for being versatile farm dogs. The precise origin of the Austrian Pinscher is unknown. Its existence though during the 18th century was verified through paintings dating back to the 1700s that depicts dogs with remarkable resemblance to todays Austrian Pinscher.

Formal breeding of the Austrian Pinscher was started in 1921. By 1928, the Austrian Pinscher is already a recognized breed. The traditional Austrian dogs from where this breed was developed were utilized as farm dogs. These ancient dogs were commonly called Farm biters as they were utilized as livestock drovers and guardians. These dogs also kept the barns and the homes free of vermin. However at the end of the 1800s, dog population began to dwindle. Due to the change in livestock husbandry, utilization for the breed decreased. In the early 1900s Emil Hauck started the search for the aboriginal type of dog that was identified as dog of the marshes (Canis palustris) by H. von Meyer in 1843. Samples of these dogs are found in the Austrian countryside. Formal breeding was done to restore the breed. More importantly is the objective of developing a dog type that would be distinct from the other landrace pinschers found in the area. By 1928 the breed is already fully established. It was given the name Osterreichischer Kurzhaarpinscher or Austrian Shorthaired Pinscher. On the same year the breed was recognized by the Austrian Kennel Club (Austrian Kynologenverband). Austria was added to the breed name not only because it is the place of origin but also because it differentiates the breed from the Rough Haired Pinscher. The Austrian Pinscher has spread and was widely accepted. But similar to other breeds, the Austrian Pinscher suffered during the World War 11 years. The breed has almost gone extinct. By 1970 only one registered dog remained. This remaining registered dog was crossed with other dogs until the breed was revived. Breed name was changed to Osterreichischer Pinscher or Austrian Pinscher in the year 2000. Presently the breed that was recognized by the FCI and by the Austrian Kynologenverband is still considered to be a rare breed.