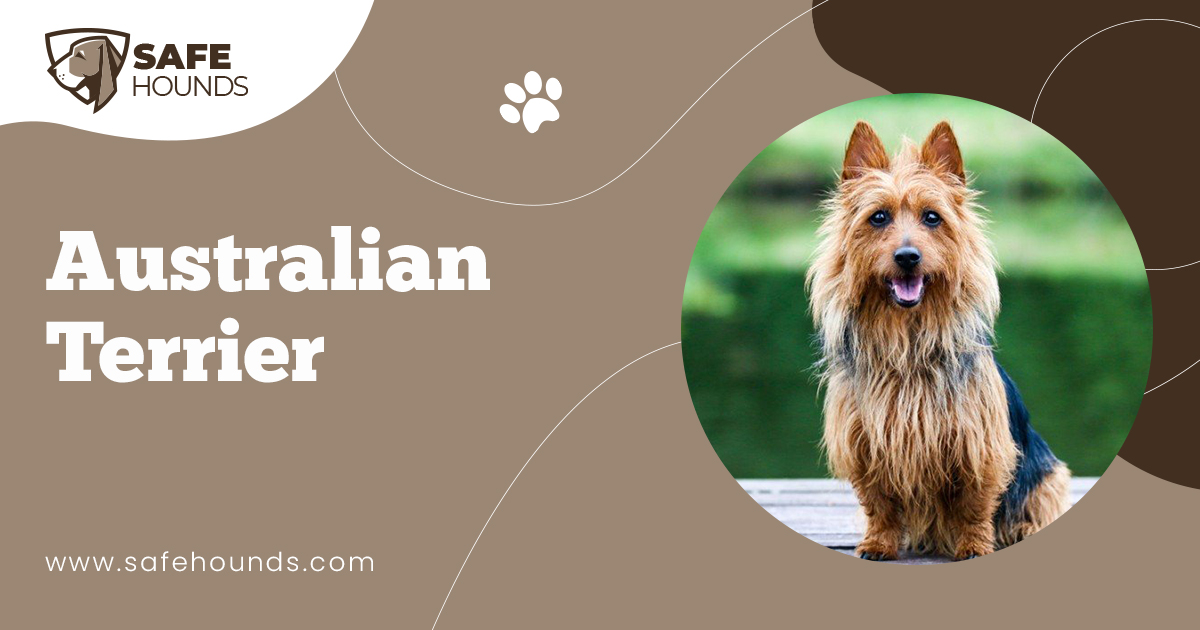 The Australian terrier is a sturdy, low set, medium boned little dog. They are usually alert, strong in terrier personality, and very active little dog. There is a ruff around the neck (said to offer protection against other animals such as snakes or rodents) and a longer, softer, and lighter colored, topknot. The topknot is the gift of the Dandie Dinmont ancestry. He has small, erect, and pointed ears that stand as though he is always listening. The eyes are little, dark, and almond shaped. They return a world of love, loyalty, and dedication to their people.

They are remarkably faithful pets and do well in dog shows throughout the world. The Australian terrier is an intelligent, curious little dog with an original outlook on life that carries over into its learning experiences. The Aussie as it is nicknamed, is a quick learner, and quite a crowd pleaser, but easily bored by repetition, and does not respond positively to severe training methods or harsh corrections. They are spirited and impulsive by nature. They are reliable small dogs and are easy to take care of if properly trained.

A mature Australian terrier should measure 10 to 11 inches at the shoulder and weigh approximately 14 to 16 lbs, however many today are considerably larger than that. The hair on top is course, harsh and straight, about 2 inches in length all over its body, with a distinctive ruff and apron, and a soft, silky topknot. The tail is docked, leaving somewhat less than one half, and should be held erect most or the time. Australian terriers come in three different colors including blue &amp, tan, solid sandy and solid red.

Most Australian Terriers in the United States are Black with Tan streaks of rich tan markings on the head and legs. The head of the Australian terrier is elongated and ends with small pricked ears that are very flexible to the touch. The length of the muzzle is equal to the length of the skull and powerful-looking jaws. Their teeth are scissor-like with a painful bite behind them. Their eyes are small dark and circular with usual looks of love and happiness.

They have a strong harsh waterproof coat on top with a soft-to-the-touch undercoat. They have a ruff around their neck to protect them from insects, rodents, and reptiles and have a short little tail. Their tail is equivalent to their legs, as they are also short compared to the length of the body. They shed little hair, and do not need to be groomed on a regular basis. The ANKC breed standard describes the dogs look as hard bitten and rugged, but they are usually considered sweet, little dogs.

The Australian terrier is a spirited and alert dog, with help from his tiny erect ears. Australian terriers are usually courageous and self-confident. They have natural aggressiveness that may be faulty if they use that against people or become unusually shy, both of which are rare. They are kept indoors and are considered companion dogs. They become very close to their owners and can be overly cautious when it comes to strangers and other dogs of the same sex. This makes them keen watchdogs.

Australian terriers must have some sort of exercise to vent their energy and so they do not get tired of repetition. He is one of the most sensible and less demanding of all terriers. He is adaptable to change, quick to learn, and easy to please (though he does need to be taught that he is not the boss early on in the owner/pet relationship).

Australian terriers are easily kept and groomed and frequent dog shows when properly groomed. In between their eyes they grow unusual little hairs, pluck these with your fingers occasionally, as they can harm or irritate the eyes. An occasionally bath and regular brushing will help with repelling insects and other unwanted bacteria. Brushing will also bring shedding down to a minimum. Nail trimming is needed regularly and should be started early and with gentle restraint.

If they are entering area dog shows, there are other care needs that the ATCA has a list of on their website. They adapt well to most situations and travel well. They have no usual food allergies and are not meticulous eaters. They are known for their longevity and many live into the teen years.

The American Kennel Club has recognized the Australian terrier since 1960, and it ranks in popularity about halfway down the list of AKC breeds. It is not, however, one of commonly known breeds of Terriers. It shares a common ancestry of many different terrier breeds and is confused by other owners, regularly asking the question: What kind of dog is that?, The Australian terrier was developed in Australia sometime during the 19th century and is the only terrier breed (other than the Schnauzer) that didnt develop in the British Isles.

Small, rough-coated terriers were used to keep rats and other problem species under control on ships, and the Aussies ancestors may have been smuggled ashore from ships taking settlers to Australia. Tasmanian settlers also found these dogs to be of value, as they warned of escaping prisoners and prowling intruders, which were two very real dangers in the early settlements.

They were useful as watchdogs and controlled the vermin problems, two characteristics that are still included in Australian terriers today. These spunky little terriers were later crossed with other terrier breeds from Great Britain: the Dandie Dinmont, the Cairn, the Yorkshire, possibly the Manchester, and the Irish, although no one knows for sure. Because of his upbringing and being so close to men, he is still sensitive and has a strong sense of devotion to his owner and household.